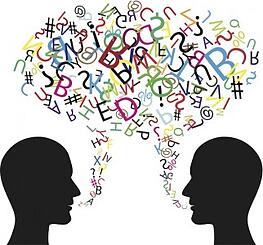 I started this post off in French, however, to remind you that your mind works differently in the presence of a foreign language. The way you read the first two sentences was likely very different from the way that you are reading this sentence right now. Much of this has to do with the ways that our brains process verbal information. For those of you for whom French is not your primarily language, the chances are high that when you read French, your mind approaches it a little more slowly and analytically than when you encounter English on the page. This might mean that you are translating linearly – that is, word by word across a sentence – or thinking more consciously about the language’s structure – “OK, so the subject is x and then there’s a verb and an adverb right next to the subject…” – or maybe just trying to figure out how the sentence would sound if it were read aloud (this mode of virtual audible reading, called subvocalization, is a key component of the way that our brains process written language!). In any event, chances are that you come to a French sentence differently than an English one.

In my next two posts, I’m going to provide my guidance as a french tutor for the grammar-based portions of the SAT-II French subject test, giving some examples of how to work through French sentences quickly and effectively.

My approach—and you are under no obligation to follow it exactly—will be a mixture of the methods I laid out above: translation, structural analysis, and subvocalization. If this all sounds very complicated, don’t panic: in reality, our brains do this kind of critical thinking with every sentence we come across; we have just internalized these processes to such a degree that they happen practically instantaneously. If you’re not there yet in French, then the exercises below might very well help you get there a little more quickly. But we’re not going to be reinventing any linguistic wheels; rather, we will just be exposing and drawing out the kind of thinking that our brains are always already engaged in when we are processing language.

So, think of the examples to come as slo-mo explanations of how language is functioning in your brain. In today’s post and the following, we’ll be focusing on sentence fill-ins, or what the SAT-II in its fancy testing language calls “Incomplete Statements.”

We’ll be picking apart sample questions and discussing the optimal way to arrive at the correct answer. Allons-y!

The very first word tells us that we are dealing with actions taking place in time. “Soudain,” which can either function as adjective or adverb, is here clearly functioning as an adverb, leading off the sentence and placing it in a time-based frame of reference. Suddenly. OK, but suddenly what? Immediately following, we find our subject Thomas and the blank is evidently going to be filled in by a verb. A quick scan of our answer choices reveals that they are all in the same tense, but which one?

This tense, the passé simple, may or may not be familiar to you, based on the level of your French instruction. The simple past is a very interesting tense in French. Almost exclusively used in written French, the passé simple is essentially a formalized version of the passé composé, the composite past, or what is sometimes referred to as the standard past. We know that the passé composé has that name because it is indeed composed of two parts: the helping or auxiliary verb (avoir or être) conjugated in the present and the action verb conjugated as a past participle. This form of the past is often also called the perfect past to distinguish it from the imparfait, or imperfect past, which as we know does not get a helping verb, and is conjugated by taking the nous stem of the verb in the present tense and adding on certain fixed endings.

We might recall that the issue of perfect v. imperfect with regard to past action pertains to whether or not the action is completely finished. When I say « j’ai mangé un sandwich » it is clear from the use of the “perfect past” that I am done eating: I ate a sandwich and now I’m doing something else. But if the phrase is in the imperfect, as « je mangeais un sandwich » it is unclear whether this is still happening: I was eating a sandwich. To jump back to our first concern, the simple past, we can describe it as a more literary version of the passé composé – that is, as a more literary perfect past, but without the need for a helping verb. In French literature, prose narratives use an alternation of the passé simple and the imparfait to construct their stories. When completed actions are being discussed, the passé simple is used; for descriptions and incomplete actions, the imparfait is used.

All of this is to say that when we scan the answer choices and discover that they are all in the passé simple—the –a and –it endings, and the lack of a helping verb confirm this—we know that the action in question is a past, completed action. Finishing off our sentence however, we find another interesting grammatical element, a present progressive gerundive – or what we call in English, an –ing verb form. So this sentence is all about time, about actions happening in a particular sequence. Let’s very quickly translate this and map it out based on what we know.

Even if we didn’t know what the phrase “en claquant” meant, we could still ascertain that the en paired with the –ant ending signified that a verb was being used in a progressive sense here, which is to say, in the in/while/by verb-ing construction in English. We put the prepositions in parentheses because they are all possible translations of the en construction. And then of course we have in brackets what we need to select from the answer choices, the most suitable completed past action for the sentence to make sense. At this point, we are done with the heavy lifting in terms of grammar. From here, all we really need is context and vocabulary. Anyone who has been through adolescence knows that door-slamming is customarily accompanied by leaving a room. So that’s what we’re looking for from the possible answer choices.

This might be a little tricky, because there are no red herrings among the answer choices; every choice could conceivably work because they are all movement verbs. We’ll have to get a little more specific about usage in order to figure out which choice works the best. Let’s work backwards. We know that « entra » means to enter, and although we’re inclined to see a door slamming as the action that follows one’s departure, it is nevetheless possible to slam a door after entering a room, too. So this could work, although it is not the most obvious possibility. We’ll keep it on the back burner and keep on moving.

What about « laissa » ? We recognize the verb laisser, to leave. A literal translation of the sentence with this answer choice would indeed be “Thomas left the room…” But does one use that verb like this in French? Or is there another verb that is specifically used for leaving places? In fact, we know that there’s quite a few in French! Anyone who has studied the passé composé with être as the auxiliary verb knows that French has a class of verbs that are all about human motion and mobility, and many of them are extremely context-specific. These are the infamous DR/MRS VANDERTRAMPP verbs, and are also known as the Maison d’Être verbs, depending on how your teachers prefer to cover them. Regardless, we know that in this category are verbs like partir and sortir and descendre that can all mean going-out in different contexts. But what about laisser? It doesn’t look good, specifically when there are other motion verbs to choose from…

We see that another answer possibility is « sortit », the simple past form of sortir, to go out. Hmmm. OK, this is exactly what we’re looking for. The verb fits the sentence in precisely the meaning we want. We’re done, oui? Mais non, mon vieux, non ! Et pourquoi pas? Because we have to think about prepositions. When one goes out, that person goes out FROM or OF the place where they previously were. In French as in English, the verb sortir takes a preposition: de. Thus, if Thomas were going out OF the room, he would have had to « sortit de la chambre », and we clearly don’t have the preposition in the sample sentence. So, a close call, but this option is out.

This leaves us with « quitta ». If we knew all along that quitter is a fabulous verb that means, precisely, to depart, then we would have been done with this question earlier. Perhaps, in fact, after answering it correctly, we would have quit the room (as we say) to stretch our legs. But if not, we could still have gotten to this point just by careful analysis. It is worth stating that the verb quitter does not need a preposition like sortir or partir. As in English, with quitter one quits a space (a room, a country…) and not quits “of” or “from” it. Do note that this verb does not mean quit in all other senses, as with a job, or a bad habit: there are special verbs for quitting a job (démissioner) and for quitting an action or habit like smoking (arrêter / cesser).

But again, even if we didn’t know these things, we could have gotten to this answer by elimination. We got rid of « entra » from context, and we were unsure about « laissa » from the get-go (newsflash: you can’t use laisser to mean leaving a room, except if you were physically putting the room down and walking away from it, like leaving your keys somewhere…). We eliminated « sortit » by remembering the rules of prepositions, and so that left us with (B) quitta as our final answer.

Now this took a lot of time to think out, but with practice and exposure, as our brains get more familiar with the language constructions of everyday speech, these sorts of calculations become faster and faster. If we train ourselves to think this way while we have the time, we can build better instincts into our “language brain.” And speaking of time, we’re out of it for now, but we’ll pick up in the next post with another example that involves temporality. Until then, keep feeding your language brain, and as always, enjoy!