The French Tutor: Planning to Take the French SAT II? 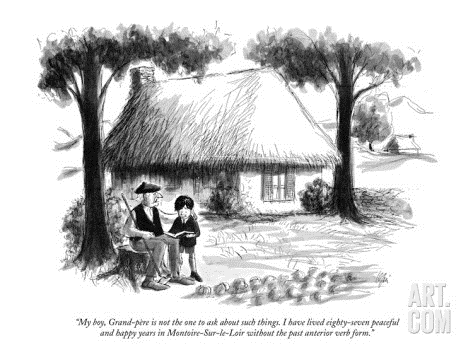 Today, our friendly neighborhood French tutor sings the Gallic gospel on a new question: Which French SAT Subject Tests should you take?

Hello, dear readers! With so many of you slogging through snow and slush and sleet in Boston, New York, and elsewhere, I figure that a little dreaming of sunnier weather could be appreciated by all. Yet, if you are like me, thoughts of warmer months also bring reflections on standardized tests, since spring, summer, and fall are all high seasons in the test prep world. So while you might be closing your eyes and fantasizing about lying on sun-kissed beaches sipping out of coconuts, this SAT tutor is lost in a reverie of multiple-choice questions and listening sections. In this (slightly perverse) spirit, today I’ll be bringing you a very nuts-and-bolts post presenting the SAT II Subject Test in French. As a wise, probably not French man once said, “Keep your friends close, and your enemies closer.” Whether you find the SAT II to be friend or foe, you ought to get to know the inner workings of the exam. So, sit back, relax, dream of warmer climes, and enjoy your introduction to the SAT II French test! Allons-y!

Like many of the language subject tests offered by the College Board, the French exam comes in two flavors: SAT II French and French with Listening. As you can imagine, the prominent difference between the two versions of the exam concerns the presence or absence of a listening section, in which test-takers answer questions (multiple-choice format) on paper based on auditory information from a variety of sources. Neither version has a speaking section, so students will never be asked to produce any verbal French, although they will need a strong command of the language’s grammar and vocabulary in order to effectively answer the kinds of questions to which they will be exposed.

Both of the French tests offered by the College Board—like all the other subject tests (20 in all)—are exactly 60 minutes long. Both test options have a greater number of questions than minutes in which to answer them, although this is not particularly problematic, as many of the questions can easily be answered in less than 60 seconds. Both options use standardized, modern, academic French, so test-takers will never be responsible for regionalisms, slang, or other colloquial interpolations in the language.

The SAT II French exam without listening is always 85 questions, and the exam is structured to cover three key areas of linguistic competence: vocabulary in context; grammar and usage (tenses, pronouns, articles, direct and indirect objects, conjugations, etc.); and reading comprehension using real sources such as journalistic articles, brochures, advertisements, and other quotidian documents. French history and French literature are not covered, and students will not need a familiarity in these fields to do well on the exam. The College Board does not expect students to be completely fluent in French at the time of examination, and so they counsel that students should expect to be surprised by the difficulty of some questions on the test. As with most standardized tests, answering every question, and answering every question correctly, is not required to receive a perfect score of 800. Of the 85 questions, 30% are devoted to testing vocabulary in context, 30-40% to grammar and language structure, and 30-40% to reading comprehension in a variety of documents. All questions are multiple-choice, although the specific format of the questions will vary.

The SAT II French with Listening exam has a variable number of questions from year to year, although the range is always between 85 and 90. Instead of 60 minutes of answering questions exclusively from the test booklet, test-takers encounter a 20 minute listening section followed by 40 minutes of the format described above. For the listening section, in French as for other language subject tests, the individual test-taker is required to bring a portable CD player with headphones that can play that portion of the exam. The listening component is not played “out loud” from a central device but is rather played simultaneously for each student in the room on individual devices approved by the test proctor. The listening section accounts for 35% of the test—about 30 questions. In the listening section, students hear short and long monologues and dialogues and answer multiple-choice questions based on what they heard; they also match narrated descriptions to pictures/images they see in their test booklet. Occasionally, they will not only be listening for the “answers” but also the “questions,” as key elements of the questions may be spoken and not written. The second section of the exam, comprising 65% of its content, has the same format and question distribution as the SAT II French test without listening, although there are fewer questions, and time is capped at 40 minutes.

Zut! That’s a lot of information to digest, I’m sure, but there’s one more piece we still have to consider: how to figure out if the SAT II French test is right for you, and if so, how to decide which version to take. One of the first places to start is the exam calendar. The College Board offers the “regular” SAT II French exam five times a year, in October, December, January, May, and June. The SAT II French with Listening exam, however, is only offered once a year, in November. As the College Board has it, students should consider taking a language subject test if they have had 3-4 years of high school-level instruction in the language, or roughly equivalent experience (speaking the language in a family setting, etc.). The College Board also advises that students should minimize the distance between their last academic contact with the language and the test date, while also ensuring that their selected test date coincides with their highest level of cumulative language ability – in other words, students should try to take the test when their language skills are sharpest and freshest in their minds, and when their progress in the language is at its furthest. It makes sense to take the test when language abilities are at their strongest, but in some cases, that “magic moment” might be well in the past, or well in the future. So, how should one decide whether, and when, to take the test? The biggest criterion to consider is current language ability and future academic planning.

If you are a freshman or sophomore and you intend to continue with French classes through graduation, then you should wait until at least the spring of junior year to take the test. But now, here’s the tricky part. If you are a junior contemplating dropping French at the end of this year, you will find that the ideal moment to take the exam will be in May or June, when your language skills will be at their cumulative summit. By the fall, without daily French instruction in your schedule, your skills will be rusty, and your test performance won’t be optimized. If you are a junior planning on continuing with French through senior year, however, your options get a little broader. It is important to remember that almost every school with an Early Action or Early Decision program will accept SAT and SAT II scores from test dates as late as November—but not later. And the vast majority of schools will accept January scores for the Regular Decision cycle. With this in mind, the question for rising seniors studying and speaking French becomes, “when should I test, and should I add the listening component?”

A look at the numbers can help clarify things. Based on statistics from 2012 and 2013 recently released by the College Board, the average score received on the SAT II French exam without listening was 635; the average score on the SAT II French with Listening exam was 654. The non-listening score of 635 places the French test pretty high on the difficulty bracket. For comparison, the lowest average score on a language subject test without listening is Latin’s 615—Sanctum santorum cacas!—and the highest is Korean’s 767. It is worth remarking that the statistics, at first glance, might seem counterintuitive. Since the listening component adds an entirely different skill set to the exam, wouldn’t it make sense that the test with listening would be objectively harder, and thus, the average scores would be lower? Well, mon ami, it is a good thought, but it fails to take into account two important, related factors: self-selection, and timing.

As discussed above, the French with Listening exam is given only once a year, in November, with just enough time for EA and ED applicants to get their score in before their files are read. The average score reported above, 654, was the nationwide score for November alone. But the average score for the “regular” exam, 635, is a composite of all of the other test dates—from October, December, January, May, and June. What does this tell us? That November is a luckier month for testing? Not quite. Here’s where the factors of self-selection and timing interact.

A student who is particularly strong in the French language, and who has confidence in their auditory skills as well as their written abilities, will be more likely to register for the test with listening than a student with shakier command of the language, or a student who is simply in a lower-level language course. Accordingly, the normalized skill level of students taking the listening version of the test is higher than the skill level in the general pool. One consequence of this is that the score outcomes of the listening exam should tend to be higher, since the population taking that version of the test is both smaller and more qualified. Nevertheless, there is no inherent advantage in taking the French with Listening exam. Rather, students should heed the advice of the College Board and pick a test date that maximizes total cumulative contact with the language.

For high school seniors applying Early Action/Early Decision, it is worth pointing out that the Listening test’s availability, while convenient, shouldn’t mandate participation. Students should take the test that will showcase their highest level of ability, and if their grammar and vocab skills are better than their oral comprehension, they should strongly consider the June, and especially the October, test dates. For high school seniors not applying EA/ED, who have less than total confidence in their language abilities, the December and/or January test dates for the SAT II French exam are ideal, since they allow more time to practice and more time with the language in class, without the pressure of getting the scores in to schools by a November deadline. In all cases, the objective is the same: beat the average score, by as much as possible.

By now it should be obvious that quite a bit of reflection and analysis is required to optimize the test prep process and pick the best test day. Let this post serve as the introduction to an ongoing conversation about foreign language subject tests, SAT readiness, and a host of other topics pertinent to college admissions. Stay tuned for more insights and commentary on these and other issues, and as always, enjoy!