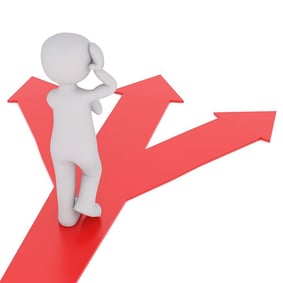 Last week, the Graduate Management Admissions Council (GMAC) announced a big change to the format of the exam -- effective July 11, test-takers will be able to exercise some optionality over the order in which they’ll take the sections.

The Big Change: What is It?

Now, students will be able to select one of three options at the test center.

Once the student selects one of those three options, that’s it -- the order can’t be modified mid-test.  And, for now at least, there’s no “have it your way” option -- you can’t just come up with your own preferred section order, but instead must pick from one of the aforementioned three choices.

Here is a quick assessment of the change, and its meaning for test takers:

Just how much the AWA and IR sections matter is a separate question altogether, and not one that most admissions committees are known for answering in a straightforward way.  Regardless, b-schools are racked and stacked based on their average 800-point GMAT scores, and the only sections that factor in those scores are Quant and Verbal.

Even with the new optionality, some students might prefer the traditional section order, reasoning that the first two sections can be used as a type of warm-up for the sections that really count.  Taking the GMAT is a strange experience!  You need to travel to a test center, answer a bunch of questions, and have your palm scanned.  Many former test-takers, myself included, have used the AWA essay as a way to settle in to the test itself and get into the “zone”.

The group of students who might be most attracted to Option 2 are those who feel that a shaky round with Quant could carry over to their Verbal section. By taking Verbal first, they’ll also feel less likely to sense their stamina flagging during those brutally complex Critical Reasoning setups or Reading Comprehension passages about the circadian rhythms of gestational manatees in Key West during winter.

Option 3 may prove most popular of all, as Quant tends to be the section that students fear and dread the most.  By taking it first, they’ll try to slay Grendel while at their very sharpest, and before that double espresso latte’s effects start to wear off.

Strange as the traditional order seemed, it was consistent, and it was uniform.  Now, the three options give already-nervous test takers one more thing to have to think about.  Counterintuitive though it may seem, extra choices aren’t always good!

As this Fast Company profile of President Obama shows, sometimes eliminating certain decisions from your day is the key to greater efficiency and better performance.

Mark Zuckerberg, Steve Jobs, and many other famously creative entrepreneurs profiled here by Forbes all kept simple dress codes, too.  In some cases, this was personal brand cultivation; in others, though, this was a conscious choice to conserve mental capacity for other, higher-order tasks.

For some test-takers, this just creates a new set of mind games and ex post facto worries about whether they made the right decision.  Mental bandwidth best applied to Pythagorean theorem and the geometric properties of special right triangles could be diverted to “strategic” thinking with a dubious payoff.

Substantively, nothing changes with the rollout of these new options. The content remains the same. The scoring remains the same. The necessary precursors for a high GMAT score -- intimate familiarity with the content, the ability to quickly process information and make decisions under time pressure, and the mental flexibility to react to novel types of problem setups -- do not change. The fundamental core of the GMAT preparation process -- identifying sources of errors on practice problems, and then rigorously, systematically addressing the content and procedural aspects of those issues, does not change.

For sure, some test-takers will eke out a few extra raw points on Verbal, now that they won’t be answering those last few questions 4+ hours into a marathon session in a strange chair in a strange room.  Some AWA essay scores might reflect attention levels tailing off a bit after students have magically checked out.  Many test-takers will feel more alert when they’re not starting Quant after an hour’s worth of other material.

But this is no quick-fix panacea for anyone -- a student stuck in the mid-600s isn’t going to suddenly vault to a 730 because of the new section ordering.

So why did they GMAC even bother with this?

The GMAC made these changes in much the same spirit as it has made other student-friendly format, scheduling, and cancellation changes in the past two years -- due to competitive pressure from its rival, the Graduate Record Examination (GRE). Lately, the GRE has been steadily eating into the GMAT’s market share at top b-school programs. By giving students a bit more control over some aspects of the test, the GMAC feels that it can make a stronger appeal to someone on the fence between the two tests.

And, the cynic in me knows, all the second-guessing engendered by this change might lead to some additional test registrations from GMAT students. At $250 a pop, the GMAC will be happy to accommodate the extra requests.

Are you interested in connecting with a GMAT tutor in Boston, New York, or online?

Want to learn more on the topic?