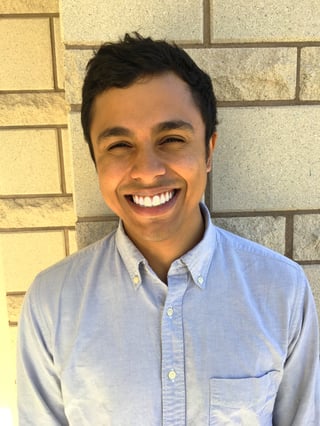 This week, we're spotlighting Ashwin, one of our exceptional test preparation tutors!

Ashwin has previously worked for two professional tutoring companies totaling over 7 years, specializing in standardized tests (e.g., SAT, ACT, GRE, MCAT) as well as admissions coaching to undergraduate & graduate schools. He has instructed close to 150 students one-on-one over his career as a tutor. He specializes in Chemistry, Biology, Physics, Mathematics, Critical Thinking, Essay Writing, and general test preparation. Ashwin has also served on the admissions committee at his medical school & has worked with many students on crafting successful applications.

Let's get started with the basics, Ashwin.  Where are you from?

We moved a lot! Grew up in Boston, New Jersey, and India.

For a long time I couldn't decide. Planned on majoring in Physics, Philosophy, Math, Art History, and English along the way. Finally decided on Biochemistry. Then Medicine. Then Political Science and Policy. So... I would say I'm pretty well rounded.

I worked on the ambulances of NYC throughout college and fell in love with medicine. But, I also wanted to explore how medicine was delivered and ended up working one of the poorest cities in America - Camden, NJ - helping failing primary care clinics. All of this lead to me pursuing an MD at the Icahn School of Medicine at Mount Sinai and a MPP at Harvard Kennedy School.

Likely I'll be a surgeon! Hopefully I will be able to take care of patients both as a doctor and as a health policy expert.

I have come to really admire teachers. The work they do is so much harder than people realize.

Haruki Murakami, Ayn Rand, and Roald Dahl. I imagine we would talk about cats, capitalism, and chocolate.

I really really dislike it when people talk to each other using mirrors. Like people do in bathrooms or gyms.

Who is one person that has deeply shaped the way you think or behave?

W. Somerset Maugham. I read his books when I was 18 and living in Paris. That book became my companion everywhere - on the trains, parks, apartments. It changed the way I looked at novels.

Being able to take a blow and get back up.

Are you interested in working with Ashwin on the SAT, ACT, GRE, or MCAT.  He's a cambridge standardized test preparation tutor, but is also available online!

Want to learn more about our incredible team of tutors?  Check out some of our pat tutor spotlights below!