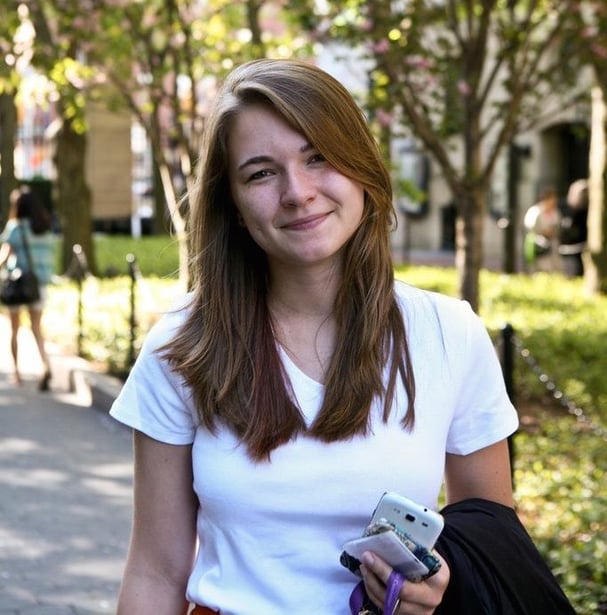 This week we're spotlighting Zuzanna Fuchs, who joined the Cambridge Coaching team in 2013 as a writing, language, and SAT tutor. She won't jump out of an airplane, but she's definitely got an adventurous a side, and will do cool things like wiggle her ears if you ask her to!  She's also a fantastic college admission coach, and has mentored many high school students to gain acceptances at their top choice colleges!

I'm from Warsaw, Poland and from Royal Oak, Michigan. I was born in Poland, but my family moved back and forth between Poland and Michigan too often for me to keep track.

2) Where did you go to college, and what did you study?

I went to Columbia University, graduated Class of 2013. I double-majored in statistics and linguistics (and if I had a dime for every time I've been asked “What do those have in common??” I would be so rich).

I'm at Harvard University, working toward a PhD in linguistics. I just finished up my second year.

4) What’s your most embarrassing favorite movie or song? What occasion would call for it?

Ricky Martin “The Cup of Life” (with “Barbie Girl” by Aqua coming in as a close second). Played whenever I'm in a fantastic mood and decide to blast music and dance around the apartment … making sure my roommates aren't home, of course.

5) Tell us your favorite epic (or not so epic) story from your childhood.

When I was in third grade I lived in Poland, but had already lived in the US for a few years and spoke English as well as any normal American third grader. Nevertheless the curriculum at my school in Poland required that I go to English class with the rest of my classmates. To make matters worse, the teacher did not speak English well … So I rebelled by not doing my homework, and persisted in my protest despite being chastised several times. I'm still pretty proud of my rebellious 10-year-old self for that.

The hippopotamus! What I wouldn't give to be a hippo... They get to relax and float around in the water all day, and they're secretly incredibly dangerous so nobody bothers them!

I was midway through my freshman year of high school, very self-conscious about the fact that I had just gotten braces while the rest of my friends had just gotten theirs off. I was very preoccupied with not being too nerdy (my friend and I made a pact to stop carrying around our trapper keepers on the same day – they were soooo middle school). I still have a recurring nightmare that I need to get into my freshman year locker but can't because I've forgotten the combination.

8) What are your favorite website(s) to browse?

Pocket Princess (these cute little cartoons about life if all the Disney Princesses lived together; the artist posts a new one each Friday), Facebook (way too much), and online window-shopping at Athleta, Zara, Banana Republic, and LOFT.

9) What are your favorite ways to idle?

Doing the New York Times crossword puzzle (I can do Monday, Tuesday, and Wednesday, but Thursdays are really a struggle. I don't even bother looking at Fri – Sun). I also like to listen to my Shakira station on Pandora, and solve MathDoKu (it's like SuDoKu on math steroids). I have also gotten to an embarrassingly high level of Candy Crush (even the guy at the Apple store genius bar was stunned) – I'm so embarrassed I won't even tell you what level that is.

I can watch Anastasia over and over and never get bored. It has a fantastic soundtrack that I know every word and sing out loud to, and I have always felt like Anastasia and I have a lot in common personality-wise. She's very independent, kind of sassy, and completely dedicated achieving her goals, even if that means taking a risk and going to a new place. Of course, the movie is completely factually untrue, and I've done a lot of reading about what actually happened to Anastasia and her family, but I'm still obsessed with the movie.

11) What are 3 alternative career/life paths you have considered (even just for fun?)

Twice in my life I have wanted to be a flight attendant. When I was younger and my family was traveling a lot I thought flight attendants were incredibly cool. Then shortly before graduating from college I met a girl who said she was a flight attendant for a private company that assigned her to individual families with private jets, and that through this job she had been all over the world. I had not yet gotten into grad school at that point and thought that this sounded like a really fun back up, at least for a few years. Two years of grad school later, I secretly still find this option rather appealing.

Some less random alternatives: Admissions officer at Columbia (because I miss my alma mater every single day) or high school teacher

12) What’s the biggest misconception about you, and why?

I think some people have this idea that I'm not adventurous. That's probably because I don't do things like jumping out of planes or bungee-jumping (I have an insane fear of heights). But to me the best kind of adventure is traveling to a new place and exploring the city and the culture, so if you ask me, I am adventurous!

13) What is something (non-generic)  that you’re grateful for?

Skype – it helps me keep in touch with my friends and family in a way that would not have been possible just a few decades ago.

Can I give four?? Peru (for Machu Picchu), Greece (I find Ancient Greece to be fascinating), Egypt (for all the obvious reasons), the Galapagos Islands (this one is a life goal, I doubt I'll have the money within the next five years).

History. Sure I took a few classes in college, but I always find myself wanting to know more – when I travel, when I read books (I'm reading the diary of Anne Frank with one of my students right now), when I hear about conflicts both in the US and abroad... None of this is happening in a historical vacuum, and I wish I knew more so that I could fully appreciate the background and significance of what's happening in the world.

I was quite bored in my seventh grade literature class and decided that by the end of the semester I would figure out how to wiggle my ears. I achieved that goal, and will proudly demonstrate my ear-wiggling abilities to anyone who's willing to watch.

18)  Name 3 commonly used things (or activities) you’d willing to give up for a year. It could be anything.

Shoes – if it weren't for winter I would go barefoot all the time.

Zuzanna loves teaching. As an undergraduate at Columbia, Zuzanna had the rare privilege of serving as a teaching assistant in two departments—statistics and linguistics—both her junior and senior years. Her responsibilities included not just grading homework, but also leading review sessions, hosting office hours, and even occasionally lecturing when the professor couldn't make it to class.  At Cambridge Coaching, Zuzanna works with student of all ages on academic subjects from English to mathematics to Polish, and to help crack the SSAT, PSAT, and SAT.

In her free time, Zuzanna enjoys drawing, swimming, and horseback riding. She has also recently taken up running, inspired by her globe-trotting, marathon-running uncle. She has quickly learned, however, that running is not nearly as easy as everyone makes it look.

Looking to work with our admissions coach Zuzanna Fuchs ? Feel free to get in touch! Cambridge Coaching offers private in-person tutoring in New York City and Boston, and online tutoring around the world.