There are two major phases of glycolysis, which are often referred to as the preparatory phase (requires the investment of 2 ATP), and the payoff phase (yields 4 ATP), with a net gain of 2 ATP. Let’s put ourselves in the shoes of nature and ask if we were to regulate glycolysis, at what step should we do so?

Early in the pathway

If we regulate a pathway early, we can avoid unnecessarily investing energy in the preparatory phase. If we, for example, regulate the enzyme aldolase that catalyzes step 4 (a later step), then we would have invested two ATP molecules with no return, which would be wasteful for the cell. What if, instead, we negatively regulated hexokinase during energy sufficiency to prevent any consumption of ATP? It seems simplest to target the first step, but there are indeed more factors to consider.

Unique to the pathway

We also want to regulate a unique pathway to prevent negatively impacting other pathways. For instance, during energy sufficiency, a cell may want to store its free glucose in reserves. Cells can store their glucose in the form of glycogen, however, one of the initial substrates for glycogen synthesis is glucose 6-phosphate. I hope you can begin to see the problem with regulating hexokinase for glycolysis regulation. During energy sufficiency, we would aim to reduce the rate of glycolysis while also storing our nutrients for later use. By inhibiting hexokinase, we accomplish the goal of slowing down glycolysis, but we do so at the cost of glycogen synthesis (as well as other pathways such as the pentose phosphate pathway, which is important for nucleotide synthesis). 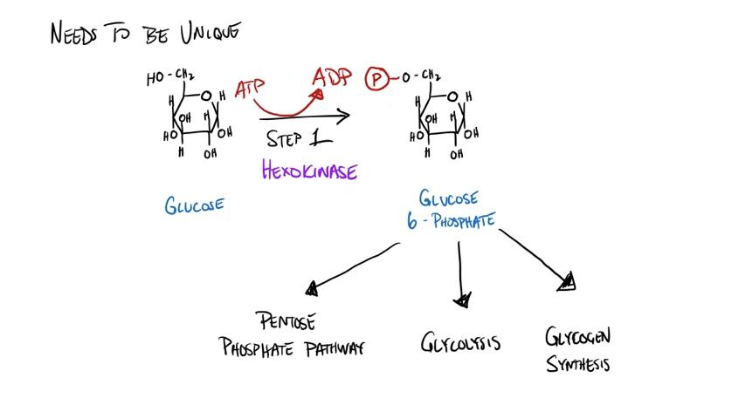 Pathways often include steps that release a large quantity of free energy, making those steps irreversible. Once an irreversible step is completed, the cell has, in some ways, committed to that pathway. When regulating a pathway, then, it is useful to consider where these large releases of free energy are, and if we can target these irreversible steps. When we look at these three characteristics, we begin to understand why nature “chose” phosphofructokinase-1 (PFK-1) as an important regulatory step of glycolysis. It is early enough to prevent wasting a second ATP molecule (step 3), it is unique to the pathway, and it catalyzes an irreversible step in glycolysis.

Consequently, we next ask what molecules could regulate PFK-1? ATP, AMP, ADP, citrate, and fructose 2,6 bisphosphate regulate PFK-1 activity but are they stimulatory or inhibitory? If we think about the end goals of glycolysis, we can find the answer to this question. ATP is one of the products of glycolysis, and when there are sufficient amounts of ATP, we may not need rapid glycolysis; ATP can negatively regulate PFK-1 activity. Essentially, ATP tells PFK-1, “hey we have enough energy you can rest.” Conversely, ATP’s energy can be utilized with the release of AMP and ADP and therefore, high concentrations of ADP or AMP are indicative of less energy available. Naturally, AMP and ADP stimulate PFK-1 activity – ‘hey, we need to produce more energy!’ Citrate’s regulatory role can seem confusing at first, but if we break down the steps it becomes clearer. When oxygen is available, the final product of glycolysis, pyruvate, can travel to the mitochondria and be converted to Acetyl-CoA. Here it will react with oxaloacetate to form citrate, which then proceeds through the citric acid cycle. If there are higher levels of citrate, it indicates that more acetyl-CoA, and therefore, pyruvate, is available indicating a high rate of glycolysis. However, if citrate is not being consumed as quickly as it is produced then the rate of the citric acid cycle is slower than that of glycolysis. Accordingly, citrate negatively regulates PFK-1 to allow the citric acid cycle to catch up. Fructose 2,6-bisphosphate stimulates PFK-1 but is outside the scope of this walkthrough (regulated by insulin, glucagon, and other molecules).

I hope this modest explanation has helped you understand glycolysis regulation. More importantly, I hope it has helped you realize that, as you make your way through biochemistry (and further into your scientific endeavors), it is equally as important that you learn to question each pathway you learn – in your studying, mutate each enzyme, and walk through the ramifications on not only that pathway, but any other related ones. Consider interactions between pathways and their products, and how a single mutation can reverberate through many biological processes. Human diseases often arise this way – this exercise is not only useful for your coursework, but if you happen to have aspirations beyond completing your biology or biochemistry course, the mindset you cultivate can allow you to excel in medicine, research, and so many other fields.

December 7, 2022 Quantum Mechanics in 5 minutes
December 2, 2022 Perfecting the internship process from start to finish
November 25, 2022 Why learn to write?
November 23, 2022 How to participate in class without saying a word
November 18, 2022 Decoding and comprehension: the two components of learning how to read
November 16, 2022 The physics behind hybrid vehicles
November 11, 2022 How to navigate a computer science major
October 31, 2022 The three pillars of time management
October 26, 2022 Steps for solving organic chemistry synthesis problems
October 19, 2022 6 steps to ace any technical interview
See more posts
navigate_beforeEdit Filters closeClose
Clear Tags closeClose