Biology Tutor: How Do We Classify Mutations? 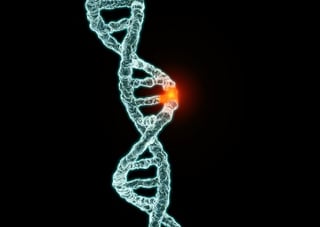 In the previous post, we discussed some of the built in mechanisms that help to prevent mutations. Sometimes, however, mutations occur in spite of these systems. There are a few different ways that mutations are typically classified in an intro biology course and there are often overlaps between these categories. Here is a brief review of some of the ways that you may see mutations classified:

Mutations can be Neutral, Beneficial, or Deleterious

While mutations are often dangerous for organisms (and there are lots of systems in place to prevent them from occurring) they can also be beneficial. For example, mutations occasionally arise in a population that are protective against an infectious disease such as malaria.

Mutations are often harmful, for example a mutation that damages the cell’s DNA checking mechanisms may increase the likelihood of the organism developing cancer

Mutations can be Silent, Missense, Nonsense, or Frameshift

1. Silent
Silent mutations are mutations that do not result in a change in phenotype.

This can occur if:

A frameshift mutation is caused when a nucleotide is added or deleted. Because codons are read in groups of three nucleotides starting from the end of the last codon, these mutations alter every subsequent codon. See below for an example of how a frame shift mutation alters down stream amino acids.

So far we have talked about mutations in the nucleotide sequence of DNA. It is also possible, however, to have errors in the overall chromosomes themselves. These mutations can be classified as deletion, duplication, inversion, insertion, or translocation mutations. These types of mutations are covered in less detail in most biology courses, so here is a brief overview of what each of those terms mean:

1. Deletion
A segment of a chromosome is deleted

2. Duplication
A segment of a chromosome is duplicated and reinserted into the chromosome

3. Inversion
A segment of a chromosome is flipped upside down and reinserted into the chromosome

4. Insertion
A segment of one chromosome is removed and inserted into another chromosome

5. Translocation
Segment from two chromosomes switch. You can also think of this as two insertions between a pair of chromosomes!

We hope this review was helpful--happy studying!

Eden is one of our Cambridge biology tutors, and is available to get started with you!  Are you interested in working with her?

Are you craving more on the topic of biology?  Read on below!