Does success on the GMAT predict success in MBA classes? 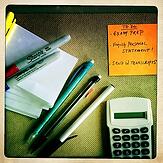 Most business schools have a core curriculum that is heavily tilted toward quantitative subjects.

Nearly all schools require graduating students to be proficient in basic finance, accounting, economics, and statistics, for example.  Many MBAs often speculate that a student’s GMAT score is highly correlated with his or her GPA once at business school. Though this theory seems merited in many respects, it has limitations. However, weighing these counterpoints against affirming evidence, it is clear that MBA applicants must take GMAT preparation seriously not only to gain acceptance to an elite business school, but also to succeed academically once there.

Naysayers argue that even many of the quantitative subjects in business school have little to do with the material tested on the GMAT.

Accounting and finance, for example, are subjects focused mostly on memorization of rules and standards, rather than analytical skills. Even areas such as statistics and economics have a litany of idiosyncratic topics unrelated to universal mathematical capabilities. Meet an average Ivy League MBA, and he will be much more likely to describe the concept of price elasticity than to recite the formula for finding the area of a circle.

Yet applying the foundational knowledge learned in core subjects to electives – and certainly to one’s career – requires quantitative fortitude.

Basic Accounting teaches students how to interpret the “labels” on an income statement; Financial Statement Analysis guides students to extrapolate conclusions from the income statement, and determine whether or not a company has promising growth prospects. This analysis requires the MBA to make back-of-the-envelope calculations, often without a pen and paper. GMAT problems test an applicant’s ability to make these calculations quickly, typically with problems involving percentages or algebraic equations.

As this blog has affirmed many times, the GMAT is one of many aspects to your “story” as an applicant. However, it is one of the most crucial – and also, most valuable during and beyond your experience as an MBA.

Entering business school, students will be stunned by the mathematical aptitude of most of their classmates. Preparing intensely for the Quantitative Section of the GMAT will prevent less number-savvy students from playing catch-up over long hours at the library during the first semester of business school.