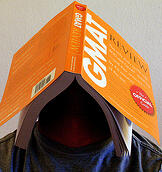 As a GMAT tutor, I know that for many GMAT test-takers idioms can quickly become the bane of their existence.  Why?

By definition, idioms are phrases or grammatical constructions that have become rule through common usage and over time can become invalid or replaced with new ones.  If they feel arbitrary, they often times are.

Most languages have their own idioms, and in the case of the English language there are thousands.  Because there are so many idioms, many people feel overwhelmed when deciding which idioms to study for the GMAT.

Many of my GMAT students will often ask me for a definitive idiom list from which I know idioms will be pulled for the test.  My response is that to learn idioms one must do hundreds of sentence corrections, thoroughly review the solutions for each of those solutions, and then make flashcards/notes with sentences containing any learned idioms.

Nevertheless, I do think there are some idioms that will more likely be tested.  Many of those idioms can be found on lists when one does a Google search on GMAT idioms.  F

Following I will highlight some of the idioms I have found on those lists and corroborated with the idioms that I have found to be the most useful to learn out of the gate when beginning a round of GMAT standardized test preparation.

Example: Not only do I like cappuccinos but also cortados.

Example: I consider you my best friend.  Neither (notice that ‘as’ nor ‘to be’ follows consider)

Neither my sisters nor my mom is laughing.

Neither my mom nor my sisters are laughing.

5. Either (subject) or (subject) – The same rule applies here as it applies to neither/nor.

Either a cake or cupcakes are left at the party.

Either cupcakes or a cake is left at the party.

Example: The senior citizens at the nursing home regard the game Angry Birds as a palliative to their boredom.

Example: She is much more resilient than her brother.

Navigating the world of GMAT prep can be a bummer. Talk to an expert for a little guidance.