In my last couple of posts I’ve discussed the Enlightenment ideal of autonomy. I have tried to describe what it is and have also endorsed its value within recognizable constraints and qualifications. Briefly, the ideal of autonomy enjoins each of us to strive for self-reliance in thought and action. In other words, we should develop and use our reasoning capacities as much as possible when adopting beliefs and deciding how to act. This time I would like to explore a tension between this ideal and the concrete reality we find ourselves confronted with. The tension arises when we reflect on the necessity and inescapability, for beings like us, of reliance on authority and trust.

In his classic essay on the topic, Kant describes enlightened autonomy as development out of one’s own, self-imposed, immaturity in self-directed reasoning and understanding. There is no doubt that at least some of the immaturity he goes on to describe is “self-imposed” in one sense or another. But Kant does not really grapple with just how difficult it is for individuals to achieve a decent measure of autonomy in belief and action. As a matter of fact, contemporary psychological research has shown us that it may be even more difficult than Kant could have anticipated. Consider this research suggesting that the mere understanding of a proposition is accompanied by automatic acceptance, meaning that to intelligently consider and possibly reject the proposition would require extra effort, effort which we earthlings are rarely disposed to give, because we are busy, and Scandal is on. Disturbing as it is, this is just the tip of a massive iceberg of tendencies toward bias imposed on us by cultural and other environmental influences enabled by our psychologies. Indeed it has become increasingly clear that our own psychological endowments may be our biggest obstacle to the proper exercise of reason (which is not to say our “immaturity” is self-imposed in Kant’s sense).

But let us begin with reflection on some basic facts that were accessible to Kant. Recall that we are biological beings that begin life in a state of profound physical and psychological immaturity. We are dependent on others for virtually everything for the first decade or so of our lives, including the information that will form the foundation of any future attempt at establishing our own later autonomy. Consider your knowledge of the meaning of the words of your first language. How did you arrive at this knowledge? In virtually every case you probably learned the meaning of a word either by accepting the testimony of someone telling you its meaning or by extrapolating from a few observations of its use. In other words, you had to rely on the authority of others to learn language. I’ll go out on a limb and guess that there is not a single person reading this who executed scientifically respectable surveys to verify that a representative sample of speakers of their first language do indeed use words to mean what they believe that they mean. I know them is fightin' words and all, but come at me, bro. 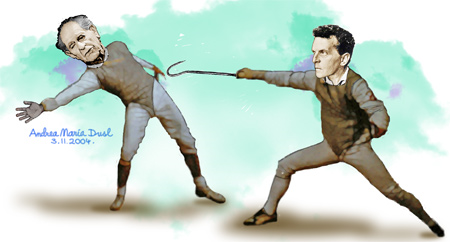 Of course, telling philosophers to "come at me, bro" is a dangerous business, as Karl Popper discovered when Ludwig Wittgenstein obliged him with a hot poker.

Now, perhaps language is a special case. Given the way language works and the limits on our time and resources, it would be positively irrational to meticulously double-check the meaning of each word we learn. This would be true even if we did not reflectively decide, as youngsters, that it was rational to adopt the language-learning strategy we did. But note that it is not as if there was a language-learning period, in which we learned the meanings of individual words, and then, once linguistically competent, a belief-formation period where we were then free to leisurely employ our acquired competence to reason about what judgments about the world to endorse. Rather, we imbibe a significant portion of our biases and beliefs through our acquisition of language. Think of how many people have simply grown up with the belief that there is a continent called “Australia” who have never been outside of the United States.

My point here is not to question the truth of any of our most mundane beliefs that we simply accepted growing up, but whether we are justified in continuing to accept them. The ideal of autonomy asks us not to accept something simply on authority, but to establish our own good reasons for believing something. Now, it may be that, for any given belief, we could decide that we have good reason to suppose that the source we received it from was a reliable one. The trouble is that it exceeds our capacities to do such a thing for every single belief we hold. How many of us remember how we acquired our beliefs about the location of Australia?

The inescapability of reliance on authority and trust extends even to society’s institution of highest epistemic repute: science. One sometimes hears that science, as opposed to other societal institutions, makes no appeal to authority. Do not believe a word of it. How many physicists do you think have individually tested the empirical predictions of Einstein’s theory of relativity? I’ll tell you right now that it is a lot fewer than the number who believe it and who presume its truthfulness in their own experimental work. The truth of the matter is that science has to have a method of establishing, and then trusting, authorities in order to be the sort of progressive enterprise it is. If every new generation of scientists had to re-establish every single piece of now accepted scientific knowledge, it would make little, if any, new discoveries and theoretical advances.

What is distinctive about science is its particular way of employing and dealing with authority. The ultimate authority is supposed to be empirical observation that is, at least in principle, open to everybody. So the authority that accrues to any individual scientist by way of empirically acquired data is available to anyone (as opposed to, say, birthright or privileged relationship to a divinity, or some other social status, etc.). This is why the scientific articles that are published and subsequently cited as authoritative must include detailed data and methods by which it was obtained—so that whoever wants to can check for themselves whether the data is replicable. Furthermore, authority in science is not supposed to be infallible or unquestionable. What is currently authoritative may always be reexamined, and possibly replaced, in the light of new evidence or considerations.

So, science, when it is working well, strikes a balance between the need for progress and the ideal of anti-authority autonomy. It does this by institutionalizing the potential, if not practice, for every scientist to be as much of an authority as every other. But what does this tell us about the problem that each individual faces in their own struggle for autonomy in the face of a mountain of unreflectively imbibed belief? Does the model of science hold any lessons applicable here? I will consider this question in my next post.