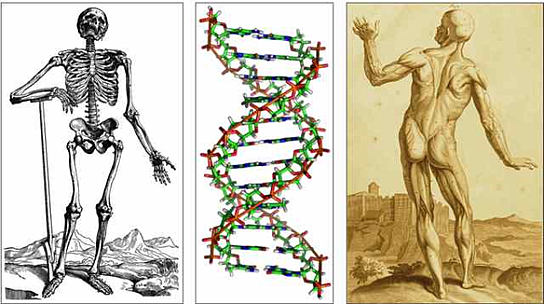 Anyone studying biology, I mean anyone, will have to learn about the Central Dogma of Biology. The name itself, Central Dogma, clearly portrays how important this is.
So what is it?

The Central Dogma describes how information flows in a biological system, from DNA to RNA to Protein. If you stop for a second and think about it, this is quite amazing. Every living organism, no matter how complex, carries its entire instruction manual, all its information on how to function, in this tiny, yet complex, macromolecule called DNA. From DNA, the information moves on to another genetic molecule called RNA, and from there to proteins, which go on to carry out all the “work” on behalf of the genes (pieces of genetic material/DNA). So, the information flow DNA-RNA-Protein constitutes the Central Dogma.

Okay, so now we know this. Are we done? No—in fact, we haven’t really started yet. A lot of the biology you will have to learn in biology classes (most likely in introductory classes), describes the process of this information flow from one step to another. As biology students and test takers, you will have to know this and know it well.

Lets summarize the most important points in each step:

Transcription is the process of converting or transcribing the genetic information from DNA to the carrier molecule, RNA. An important molecule called RNA polymerase carries out this job. This molecule does not randomly convert DNA to RNA. If protein 1 is encoded by gene 1, this molecule will convert only gene 1 to RNA. How can this molecule tell where to start and where to stop? Genes have punctuation marks that are encoded in the genetic sequence before the gene starts and after the gene ends. RNA polymerase will recognize the start sequence, called a promoter, on the DNA and start converting DNA to RNA from that point. Then at the end of the gene, another sequence called terminator, tells the RNA polymerase to stop because the gene is done.

Now that RNA is made we can move forward with making the protein.

Translation is the process of converting or translating the RNA information into protein. This process is carried out by an important organelle in the cell, called the ribosome. Like the RNA polymerase, the ribosome can read punctuation marks in the RNA. It starts converting RNA to protein at points called start codon and it stops at points called stop codon. Once the protein is made, it needs to fold in the correct way before it can go on to carry out a function in the cell. 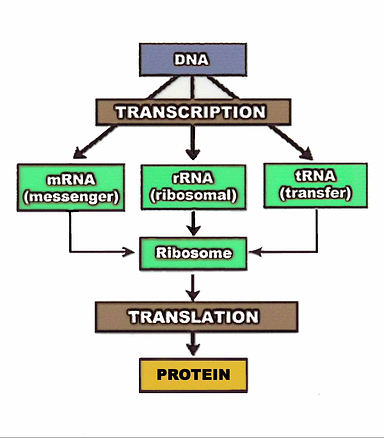 This is just a condensed summary, though. There are many more steps to transcription and translation and biology classes go through this process in much more detail.

How do you best study the steps and components of each process?

As I have mentioned before, I suggest closing the book and sitting down with a blank piece of paper. Take one gene and sketch out all the steps and components it takes to go from it to the protein. Go about this process as if you were explaining it to someone that does not know much about biology. Think of the questions someone like that would ask and see if you know how to answer them. If you can clearly explain the process to someone else, then you really know it. By going over the material this way, you are not simply memorizing it, but you are studying it in a way that will allow the knowledge to stay with you for a very long time.