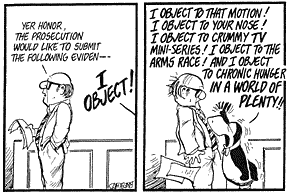 My last post on philosophical writing addressed the issue of constructing arguments for your philosophical theses.  Since then, model students of philosophy that you are, I’m sure you’ve been wandering the streets, haunting the parks, and occupying the coffee shops of Manhattan, Cambridge, Kalamazoo, or wherever you happen to live, dreaming up ingenious arguments for your revolutionary ideas.  As I, your humble philosophy tutor, did my best to communicate, it can be helpful to think of coming up with an argument as simply finding the best reasons for why someone, anyone, should believe the thesis or claim you have in mind.


Easier said than done, I know.  And so I proposed the strategy of considering the opposite of the thesis you want to argue for and asking yourself why you think it is false.  Then, think about what you would need to do to convince someone who actually did believe the opposite of what you want to argue for to come around to realize their error.  A further suggestion was to think about and model your argument on how a dialectic might go in an actual case of debate.  What are the kinds of general principles and actual or hypothetical cases you would ask your interlocutor to consider?


So far, then, we’ve discussed choosing and formulating a main claim to be argued for, and then constructing an argument for it.  The next step in assembling the nuts and bolts of a good philosophy paper may also be usefully modeled by thinking about how actual, reasonable debates go with friends, colleagues, and acquaintances.  This is the step where you think up potential objections to your argument along with your replies.  It corresponds to the part of a real live debate when your interlocutor says, “But what about….”.


If your real life debates are anything like mine, it doesn’t matter how good of an argument you offer for the point you’re trying to make.  As soon as you are finished, the person you are arguing with will have a worry or concern, usually having very little to do with the argument you just offered.  The lack of general criteria to decide between players of different positions or different eras means that there is no saying who the greatest basketball player is, you argue.  “But what about the fact that Michael Jordan was the best dunker ever!?”, comes your friend’s reply (please note the illustrative purpose of the example which I am neither endorsing nor denying).  When writing your own paper, you have to be your own interlocutor, generating objections and potential counterexamples to the case you are trying to make.


Now, you may be wondering, why would anyone try to undermine their own argument?  The proper answer (of course!) is that we are interested in the truth more than in being right and so we want to test our own ideas to see whether they are actually true and not just that we wish they were true.  But, to continue our theme, it is helpful to think about it dialectically as well.  Think about someone who antecedently believes the opposite of what you are arguing coming along and reading your paper.  They are going to be doing their best to think up their own objections and counterexamples to what you say.  If you haven’t anticipated them and done your best to preemptively address their worries, they will be much more likely to dismiss your original argument without giving it its proper due.


Now, of course you cannot think up, let alone address, every possible objection, good or bad, that someone might raise.  You obviously need to narrow them down to the best ones.  So how does one do that?  This is where knowing the literature concerning the topic you are working on becomes crucial.  What are the kinds of considerations that opponents of your thesis typically raise (because, trust me, the likelihood that no one has ever tried to argue something very similar to what you are saying at this point in the history of philosophy is very small)?  How would they tailor such considerations to address the new moves you try to make in the debate?  Can you come up with an original objection to the thesis?  Try imagining yourself into the place of a colleague who was giving someone feedback on their argument.  What worries or concerns would you raise for yourself?


Finally, not only do you not have to come up with objections and replies all by yourself, you shouldn’t.  Philosophy is a collective and cooperative enterprise, not one where people go into solitude until they have thought their deepest thoughts.  Share your ideas with others and see what objections they come up with.  Try out your replies on them and see what they say.  This will improve the quality of your paper tremendously.  Perhaps you will have objections brought up to you that you hadn’t thought of yourself.  You can incorporate them into your paper and respond.  Just be sure to credit whomever offered the objection.  Articles in professional philosophy journals are filled with footnotes crediting objections and concerns to people the authors have shared the papers with.


The important thing to remember is this: no matter how good an argument you have, if someone has a worry or objection that is not directly addressed by your argument, he or she will not be convinced until you do something to directly address the concern.  This is what makes coming up with both objections and convincing replies absolutely crucial to assembling the skeleton of a philosophy paper.