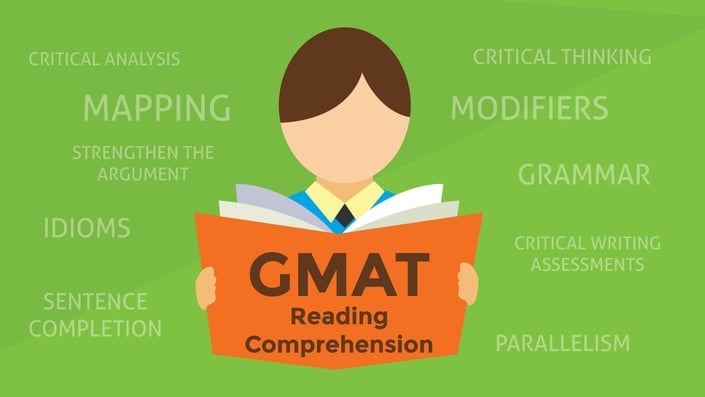 Focus on weaknesses, but capitalize on strengths

The GMAT has no shortage of intimidating problem types. For many test takers, Data Sufficiency and Critical Reasoning alone are enough to induce heart palpitations. Understandably, many students focus on these very intricate, complicated question types - and rightfully so! It is no easy feat to break down a complicated argument or to determine precisely how much information is required to solve a complicated math problem.

In contrast, the Reading Comprehension questions are sometimes perceived as more “straightforward.” After all, we are just reading passages and answering questions based on what we read, right? We did this on the SAT and on every other standardized test ever. In the grand scheme of things, Reading Comprehension tends to be overshadowed by more demanding portions of the test. But, beware! By neglecting Reading Comprehension, you may be missing a key opportunity to rack up some points on the GMAT verbal section.

Yes, standardized test prep is absolutely about honing in on weaknesses. However, much can be gained by capitalizing on our strengths as well. Let’s say that you consider the arguments to be the most challenging, so you harness all of your energy toward Critical Reasoning and manage to make some moderate improvements. Now, imagine you did this, but you’ve also really perfected Reading Comprehension and Sentence Corrections – NOW you are in a position to earn a truly competitive verbal score on the GMAT.

All of that said, I would like to present some strategies for tackling an often overlooked section of the GMAT: Reading Comprehension.

In an effort to save time, it is tempting to simply skim the reading comprehension passages - or even to skip the initial read-through entirely and just focus on finding the answers. In most cases, this will make your task much harder. Questions take longer to answer when we only have a partial understanding of the text. By investing a bit more time in that initial readthrough, we can work through the questions more quickly and ultimately save time overall.

What to do on our initial read-through

On the initial readthrough, we do not necessarily need to memorize every detail, but we do want to get a sense of the passage’s key points and overall structure.

1.) Make a “Passage Map” – Briefly jot down key points in the passage, including at least one key idea from each paragraph.
2.) Primary Purpose – Make sure that you can identify in your own words the primary purpose of the passage as precisely as possible. Consider whether the author is summarizing, arguing, or evaluating something.
3.) Central Claim – Identify the central claim of the author. Be careful not to merely identify the topic area. The central claim is typically an assertion, an opinion, or a thesis statement.

Consider the sample passage below to see what I mean. The passage map outlines the structure of the passage and forces us to pay attention as we read. It is not necessary to write down the purpose and central claim, but be sure to at least think about these before moving onto the questions.

"Exactly when in the early modern era Native Americans began exchanging animal furs with Europeans for European-made goods is uncertain. What is fairly certain, even though they left no written evidence of having done so, is that the first Europeans to conduct such trade during the modern period were fishing crews working the waters around Newfoundland. Archaeologists had noticed that sixteenth-century Native American sites were strewn with iron bolts and metal pins. Only later, upon reading Nicolas Denys’s 1672 account of seventeenth-century European settlements in North America, did archaeologists realize that sixteenth-century European fishing crews had dismantled and exchanged parts of their ships for furs.

By the time Europeans sailing the Atlantic coast of North America first documented the fur trade, it was apparently well underway. The first to record such trade – the captain of a Portuguese vessel sailing from Newfoundland in 1501 – observed that a Native American aboard the ship wore Venetian silver earrings. Another early chronicler noted in 1524 that Native Americans living along the coast of what is now New England had become selective about European trade goods: they accepted only knives, fishhooks, and sharp metal. By the time Cartier sailed the Saint Lawrence River ten years later, Native Americans had traded with Europeans for more than thirty years, perhaps half a century." 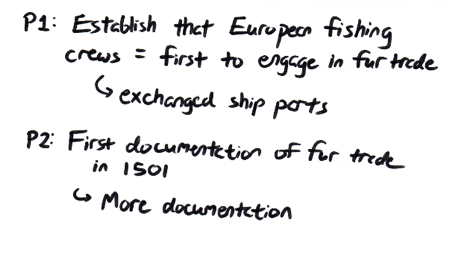 Purpose of the Passage: to describe historians’ understanding of how fur trade between Europeans and Native Americans began to develop, and to present documentation in support of this understanding

Central Claim(s): European fishing crews were the first to engage in fur trade, and this fur trade began sometime before 1500.

Great! We have read and mapped out the passage. Now how do we approach the questions?

With a thorough understanding of the passage, the questions should only take a few seconds each to answer. Below are some of the most important tips for answering Reading Comprehension questions.

(1) Literal Evidence: GMAT reading is evidence based, meaning that answers must be explicitly stated in the passage. No answer choice will require you to use outside knowledge or make assumptions.

(2) Exact Wording: Every word in the answer choice must be correct. Just one word or phrase is enough to knock out an entire answer choice. Correct answers are often very generally or vaguely worded – they won’t say anything particularly radical.

Let us consider two sample questions about the above passage:

Example 1: Which of the following best describes the primary function of the last sentence of the first paragraph?

(A) It offers a reconsideration of a claim made in the preceding sentence.

(B) It reveals how archaeologists arrived at an interpretation of the evidence mentioned in the preceding sentence.

(C) It shows how scholars misinterpreted the significance of certain evidence mentioned in the preceding sentence.

(D) It identifies one of the first significant accounts of seventeenth-century European settlements in North America.

(E) It explains why Denys’s account of seventeenth-century European settlements is thought to be significant.

Step 1: Identify the sentence that the question refers to.

Step 2: What is the question asking?

This is a purpose question. We care less about what the sentence says and more about the role this sentence plays in the overall paragraph.

Step 3: Literally state in your own words what this sentence is doing in relation to the paragraph.

It’s establishes HOW archaeologists came to realize that it was the fishing crews that traded first.

Step 4: Read through answers, and identify flaws and possible answers.

I like to start by identifying single words and phrases that make answer choices wrong. Keep in mind that one “mistake” in an answer choice is enough to throw out the whole thing.

(A) It offers a reconsideration of a claim…

(C) It shows how scholars misinterpreted…

(D) It identifies one of the first  significant accounts…

(E) It explains why Denys’s account of seventeenth European settlements is thought to be significant (hmm… this account was significant. This answer does not seem terrible. Let’s come back to it.)

Answer choices (A) and (C) are outright wrong. For answer choice (D), nothing indicates that this is “one of the first.” Answer choice (E) could be tempting: Denys’s account of seventeenth century European settlements IS significant, so this is factually correct. But, that’s not really the point of including this detail. Remember that this is a purpose question.

Answer choice (B) is correct, because it actually describes how this detail relates to the rest of the paragraph and states the author’s primary purpose in including this detail.

Let us look at one more example:

Example 2: The passage suggests which of the following about the sixteenth-century Native Americans who trade with Europeans on the coast of what is now called New England?

(A) By 1524 they had become accustomed to exchanging goods with Europeans.

(B) They were unfamiliar with metals before encountering Europeans.

(C) They had no practical uses for European goods other than metals and metal implements.

(D) By 1524 they had become disdainful of European traders because such traders had treated them unfairly in the past.

(E) By 1524 they demanded only the most prized European goods because they had come to realize how valuable furs were on European markets.

We are looking for some mention of “sixteenth-century Native Americans who trade with Europeans on the coast of what is now called New England.” We can find this about halfway through the second paragraph:

“Another early chronicler noted in 1524 that Native Americans living along the coast of what is now New England had become selective about European trade goods: they accepted only knives, fishhooks, and sharp metal.”

Step 2: What is the question asking?

This is an inference question – it asks what the passage suggests. So, we are interested in what would definitely be true based solely on the information in this sentence.

Step 3: Work through the answer choices.

(A) By 1524, they had become accustomed to exchanging goods with Europeans. (I mean, yes. This is factually correct. They have been trading for a while by this point. This may explain why they felt comfortable making specific demands. Possibly the answer?)

(B) They were unfamiliar with metals ...

Answer choices (B), (C), (D), and (E) have no real evidence. It is certainly possible that they were unfamiliar with metals, had no practical uses for other goods, or were disdainful. It is possible that knives and fishhooks were the most prized European goods. “Possible” is not good enough though. We need proof!

Answer choice (A) is correct because there is proof of this. They have been exchanging goods for several decades by this point. Nothing about this answer choice requires any huge leaps in logic.

As you prepare to take the GMAT, do focus on the areas you struggle with most. By all means, work on those argument questions, practice data sufficiency, review those obscure grammar rules. But, do not neglect question types that may initially seem straightforward. Doing really well on Reading Comprehension could compensate for a lower Critical Reasoning or Sentence Correction score. So, remember to read carefully, take time to understand the question, and practice employing these techniques!

The GMAT is a test you can prepare for. It is not an intelligence test. With the GMAT, more than with any other standardized test, having a clear and targeted strategy for your preparation will help you get a high score, while also allowing you to juggle your other priorities. If you’re applying to business school, you probably have a lot on your plate, and need your test preparation to be effective and efficient.

You might be wondering why we’re so confident the GMAT can be mastered. The reason is simple: Because question types recur frequently, knowing instantly which methodologies to apply to each type of question dramatically improves scores. In essence, it allows you to know at a glance what the test is looking for. Your success on the GMAT depends on your ability to:

Our tutors are experts at guiding students through these challenges. We also understand the make-or-break importance of the GMAT and we're dedicated to helping you beat the exam. Before you even meet with your tutor, we assess your strengths and weaknesses on a diagnostic exam. Based on your results, your tutor will construct a customized syllabus in advance of your first session. While your syllabus will be tailored to your unique needs, this roadmap provides a detailed example of how a Cambridge Coaching tutor will work to customize and structure your tutoring.

Studying for the GMAT? Read some of our previous blog posts below!