Marginal Rate of Substitution (MRS), Marginal Utility (MU), and How They Relate 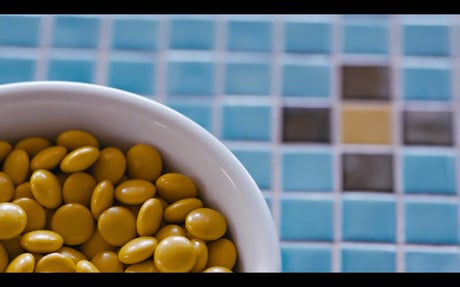 Story Explanation of the Marginal Rate of Substitution

Let’s imagine that I have some jelly beans and some M&Ms. I like both types of candy and I like having the choice between fruity and chocolatey, so I’m pretty happy right now. Now imagine someone comes along and wants one of my jelly beans. Maybe this person only wants half a jelly bean. The point is that the person wants a very very small amount of jelly beans.

The Marginal Rate of Substitution captures the rate at which I would be willing to exchange a tiny bit of jelly beans for M&Ms.

Formal Definition of the Marginal Rate of Substitution

) in order to be exactly as happy after the trade as before the trade. Let

. Then, the MRS equals

Note that the MRS is negative, because we are giving up some of

is negative) to get some of

is positive). A negative divided by a positive is a negative, so it follows that the MRS is negative.

Relationship Between the MRS and Indifference Curves

To find the slope of a curve at a specific point, you use calculus. Take the first derivative of the equation for the indifference curve, then plug in the values of

for the point you are interested in. That will give you the MRS at that point.

What do you think happens to the MRS along the indifference curve? When I have a lot of

, I’m willing to give up quite a bit of

to get a little bit of

. However, this changes as I move along my indifference curve. When I get to a point where I’m just as happy as before but now I have tons of

, I no longer want to give up much

to get a little

. This phenomenon is known as the diminishing rate of marginal substitution. 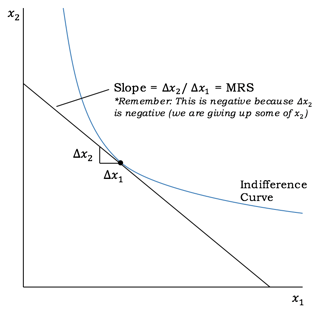 Story Explanation of the Marginal Utility

Similarly, my happiness (which economists call “utility”) would change if someone changed the amount of M&Ms I had. When the change in M&Ms is tiny (“marginal”) then the resulting change in my utility is known as my marginal utility of M&Ms.

the consumer has remains constant. We can represent this marginal utility as

is the rate of change in utility

resulting from a small change in good 1 (

Similarly, the marginal utility with respect to good 2 is the rate at which utility changes when the consumer’s amount of

is changed by a marginal amount while his/her amount of

remains fixed at a constant amount. The equation for

Marginal utility will always be positive when we are dealing with goods (as opposed to bads or neutrals). This is because getting more will make us happier, so when the denominator (

) is positive, the numerator

is also positive. Similarly, when we lose some of good 1,

is negative and we are less happy, so

is also negative. A negative divided by a negative is positive, so the marginal utility of a good will always be a positive value.

Note that in both cases, we can do a little algebra to find the total change in utility resulting from a marginal change in one good while the amount of the other good is held constant.

Let’s use good 1 as our example. Above, we saw that

. If we multiply both sides by

The Marginal Rate of Substitution looks at the balance in changes of good 1 and good 2 required for the consumer to be indifferent between his/her consumption bundles before and after trade. But what does indifference mean? It means that utility for both bundles is exactly equal. Therefore,

There is some (negative) change in utility resulting from giving up a little bit of good 2, and as we saw in the previous section, this change equals

Similarly, there is some (positive) change in utility from getting a little more of good 1, which equals

Since we want to be indifferent before and after the trade, it must be that the sum of these changes equals zero. That is,

With a little algebra, we can find the MRS from this equation of marginal utilities!

from both sides. Then,

Next, divide both sides by

When using calculus, the marginal utility of good 1 is defined by the partial derivative of the utility function with respect to

We want to consider a tiny change in our consumption bundle, and we represent this change as

We want the change to be such that our utility does not change (e.g.

). Therefore, we want to solve

which is just the calculus version of

Instead of using derivatives, we could use implicit functions. Any given indifference curve can be represented as

is a constant and the level of utility held constant along the indifference curve. We use the notation

simply to illustrate that

is a function of

If we differentiate both sides of

We can again rearrange terms and the result is the same as what we found before:

was our original utility function and

is our monotonically transformed utility function (so

is a monotonic function). Then, using our calculus definition of the MRS, we have

before the transformation and

So the MRS is completely unchanged by any monotonic transformation!

Acknowledgements: Much of this post was inspired by chapters 3 and 4 of Hal Varian’s textbook Intermediate Microeconomics: A Modern Approach.

Are you interested in being connected with a New York or Boston tutor?