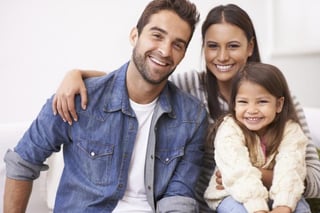 Different traits are inherited in different ways. Many intro biology classes will expect you to be able to identify different patterns of inheritance and parental genotypes based on either a pedigree or the rates of a given phenotype in the offspring. It is helpful to be familiar with the phenotype ratios, pedigree charts, and the specifics of the inheritance mechanisms to solve those kinds of problems. Here is a brief review that will help you master this important content!

A brief note: while we give you the phenotypic ratios in this review, it is probably not an efficient use of your time to memorize these ratios. Instead, use the tables to test your understanding of the inheritance mechanisms. If you understand the mechanisms well, you should be able to generate the ratios quickly on test day.

Autosomal recessive traits require two copies of the recessive allele to be expressed. 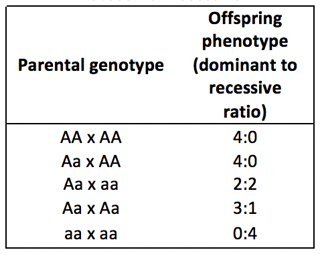 Autosomal recessive pedigrees can look differently based on the genotype of the parents. Here is an example pedigree: 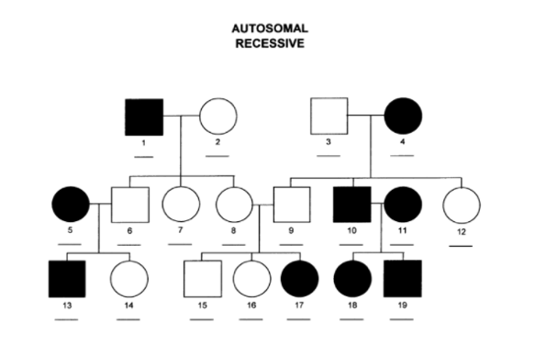 These traits appear with equal frequency in both sexes.

An autosomal dominant trait will result in the dominant phenotype if one or more copies of the dominant allele are present.

An autosomal dominant trait will result in the same ratios of dominant to recessive phenotype as seen above in the autosomal recessive chart!

In a pedigree this phenotype will appear with equal frequency in both sexes but it will not skip generations.

Here is an example of an autosomal dominant recessive pedigree: 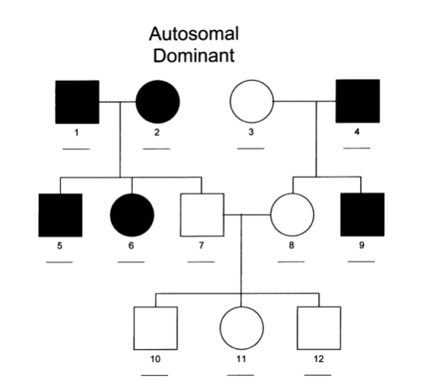 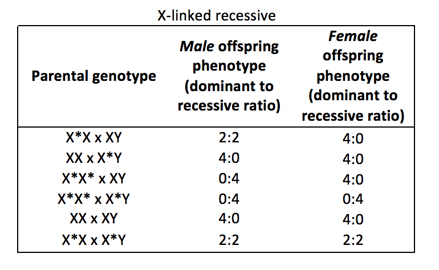 This trait is never passed from father to son, because a father carries the allele on his X chromosome, but always passes his Y chromosome on to any sons. 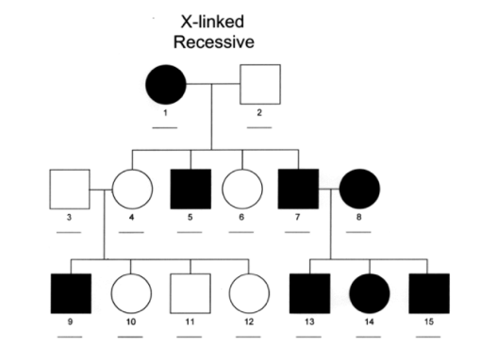 This kind of inheritance is less common than X-linked recessive. It occurs when a dominant gene is carried on the X chromosome. Unlike X-linked recessive traits, only one copy of the dominant X-linked allele is required to result in the phenotype in both male and female offspring.

How can you identify an X-linked dominant trait

-All affected females have an affected father or mother

-All female progeny of an affected male are affected

This is a rare type of inheritance, where the gene of interest is located on the Y-chromosome. Because, at most, one copy of the Y chromosome is inherited, dominant and recessive don’t really apply here.

How can you identify a Y-linked dominant trait?

Because only males have a Y chromosome, female offspring of an affected father cannot express the trait

Every son of an affected father will express the trait

Are you interested in working with Eden, one of our Cambirdge-based biology tutors?

Want to read more on biology as a subject, written by our resident expert Eden?

How Should I Time Myself on the MCAT? 5 Essential Tips