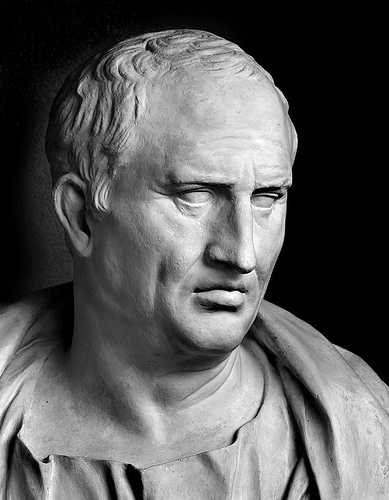 Want to know how can Cicero get you into college? Read on.

Today, we offer the first of two guest posts from our good friends at Calder Classics on why learning a "dead language" might be the very thing that gives you the edge you need in college admissions. Based in New York, Calder Classics is an elite educational company committed to helping students prosper by giving them the chance to learn the classics in the very places they were created: Rome, Florence, and Pompeii.

Getting into college. It’s something high school students and parents both dread and seek, in large part because the process is so opaque. We can never know for sure if an application will be successful.  In fact, the only thing we know is: it’s difficult. In 2014, Harvard accepted just 6.9% of its applicants. Dartmouth, 11.5%. UCLA accepted 20.43% and Boston University accepted 36.22% of applications in 2013. Students looking to get into good schools have their work cut out for them and often end up asking, “what is the secret?”

Spoiler alert: there is no secret. But there are specific things you can pursue to make your application to your dream school as strong as possible. At Calder Classics we suggest challenging yourself to take Latin and ancient Greek in high school. “Latin?” You may ask, “isn’t that a dead language?” Why yes, good student, it is. In this first of two posts on the benefits of taking Latin and ancient Greek, I outline three reasons why Latin can help increase your chances for “getting in.”

1. Make Your College Application Stand Out

How can a high school student distinguish herself from the rest of the crowd? How can you make your application sing? Have Latin on your transcripts.

“Because so few students these days master Latin, it can help an applicant,” said William Fitzsimmons, Harvard’s dean of undergraduate admissions and financial aid, in this Bloomberg article. “We certainly do take notice,” Fitzsimmons noted, explaining that Latin would have excited an admissions officer 38 years ago when he began his career, and “such a student today would be even a greater rarity, standing out even more,” he said. “It can end up tipping the student into the class.”

Studying Latin can help even if you don’t have top test scores and grades. Andrea Thomas, Assistant Dean of Admission, Hamilton College said, “I was particularly impressed by a student with average test scores and grades who had taken Latin throughout middle and high school. We ended up offering the student admission, and I think it is fair to say that it was his commitment to Latin that tipped the scales.”

Learning Latin requires abstract thinking and hard work. Colleges know this. When asked what he thinks when he sees Latin on a high school transcript, Michael C. Behnke, Vice President for Enrollment at University of Chicago, said, “This student is likely to be disciplined, have a strong basis for further learning, [and] be a little more creative toward intellectual pursuits than most.” You’ve chosen Latin. You’re different.

Did you know that Latin words form the roots of many English words? You should. For example: “He is so perfidious.” Perfidious, one of the 100 most common words to appear on the SAT (link) and meaning treacherous or deceitful, comes from the Latin perfidiosus, for faithless or dishonest. Learning Latin in high school automatically gives you a leg up on your verbal SAT. “Vocabulary and grammar of the English language can be mightily improved through the study of Latin,” reported Kathy Lindsey, Associate Director of Admissions, Middlebury College. Andrea Thomas agrees: “A background in Latin provides students with a stronger English vocabulary. Open any SAT prep book and you will see a crash course in Latin in the vocab section.”

Why spend extra time memorizing mountains of flashcards for the SAT when you can use the language you learn in class to identify roots and score highly.

3. Latin and Roman Culture are a Foundation of Western Civilization

Perhaps most importantly, taking Latin and learning about ancient Roman culture provides you with a strong foundation from which to explore other areas of study. Echoes from ancient Rome continue to be heard in our culture today.   “The study of Roman culture which typically accompanies Latin study informs the study of any Western literature, art, or culture as well. [. . .] If Latin were dead, every Western culture and language would be also bereft of life,” said Matthew Potts, Admissions Counselor at University of Notre Dame. It’s true. The modern Romance Languages? Came from Latin. Our form of government here in the United States? Heavily influenced by that of ancient Rome. Like Shakespeare? Want to study Law? All owe a debt to ancient Rome and Latin.

Where can you learn Latin? Want to add it to your transcript? Want to add a study abroad experience to your resume as well? At Calder Classics, we offer summer programs for high school students in Florence, Rome, and Pompeii that combine Latin with either the art treasures of Florence, the ancient history of Rome, or archaeological adventures in the area of Pompeii.