The symbol “dx” comes up everywhere in calculus. For example:

But what is “dx” really? It’s more than just notation! In this post, we’ll explore the meaning of “dx” and try to get a better understanding of some of the symbols that we often see in calculus.

Calculus as the study of infinitesimal change

Suppose now that you wanted to know your speed at time x=10 seconds. That is a calculus question since you are looking for a rate of change at one particular time. How could you do this? Well, you might estimate your speed at time t=10 as our average speed between time x=10 and x=11, which can be expressed as:

Really, what you want to do is to take the limit as the size of your time interval goes to zero. That is, you want to take an infinitesimally small change in x. Then, by the definition of a derivative, your speed at x=10 seconds is:

We should think of h going to zero as taking smaller and smaller increases in x when we take the average speed from time x=10 to time x=10+h.

This is where “dx” comes in.

"dx" is an infinitesimal change in x. We can think of "dx" (read as dee-ex) as an infinitesimally small change in x. The "d" in "dx" should remind you of a delta ∆, which is the symbol for change. "dx has no numerical value. Rather, it captures this idea that occurs a lot in calculus of taking the limit of smaller and smaller interval sizes to figure out something precisely about a continuous function.

We can see this if we revisit our speed example from earlier. When computing our derivative

“dx” as seen in integrals

"dx" here is still an infinitesimal change in x. To see why it's there, we should think of the integral as a signed area and as the limit of Riemann sums. We recall that to compute a left Riemann sum of f(x) from x=a to x=b with n intervals, we let the following be true:

Then, as we let n go to infinity, ∆x gets smaller and smaller, and the Riemann sum converges in value to the integral, which is the signed area under the curve f(x) between x=a and x=b. The below picture (from the Wikipedia article on Riemann sums) shows this convergence process: 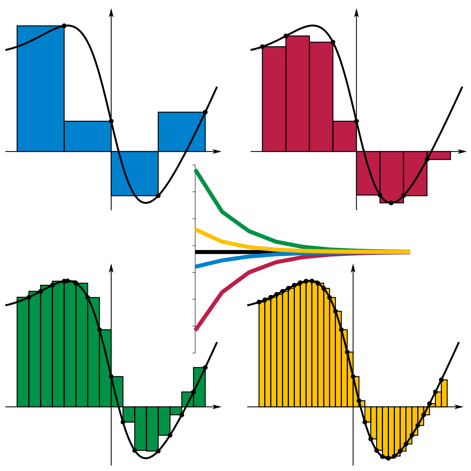 Now, we can see where the notation for the integral comes from. The integral sign ∫ is the continuous version of the sum sign ∑. The bounds of integration from a to b are like the first and last x values for the summation. And the dx is the infinitesimal version of ∆x, what we get when we take smaller and smaller step sizes in x.

Another way to think about this is that in our integral, we are summing up infinitesimally thin rectangles with height f(x) and width dx to compute our signed area precisely.

Hopefully, the symbol “dx” is a little less mysterious now!