Trusting your ear can get you far, but knowing some key grammar rules gets you even farther!

Many people describe their approach to Sentence Corrections on the GMAT in the following way: they read through all five answer choices and simply choose the answer that sounds the best. Honestly, this is not a bad approach. Many of the wrong answers will “sound wrong” upon reading them, and simply trusting your ear can get you pretty far on this question type. To answer the hardest questions though, we will need to know some specific rules. This article will not aim to outline every specific grammar concept there is, but we will focus on one particularly useful concept: dangling modifiers.

What is a Dangling Modifier?

Let us consider the following sentence:

Having studied every page of the textbook for several hours, the exam was not very difficult for Trent.

Perhaps you noticed that the sentence sounds a little weird, but can you pinpoint precisely what is wrong? Let us break this into two parts:

[Having studied every page of the textbook for several hours,] the exam was not very difficult for Trent.

The modifier is now describing the correct subject, Trent. This sentence works!

Great. So now I know what a modifier is. How can I apply this knowledge on the GMAT Sentence Corrections?

Obviously, not every sentence correction question is going to have a modifier error, but many of them do! If we can recognize a modifier error, we may be able to easily and quickly eliminate as many as three or four answer choices, saving valuable time on the Verbal section. Let us look at the following question:

When viewed from the window of a speeding train, the speed with which nearby objects moves seems faster than that of more distant objects.

So before we start reading through all of the answer choices and deciding which one sounds the best, let us analyze the initial sentence for any obvious errors. 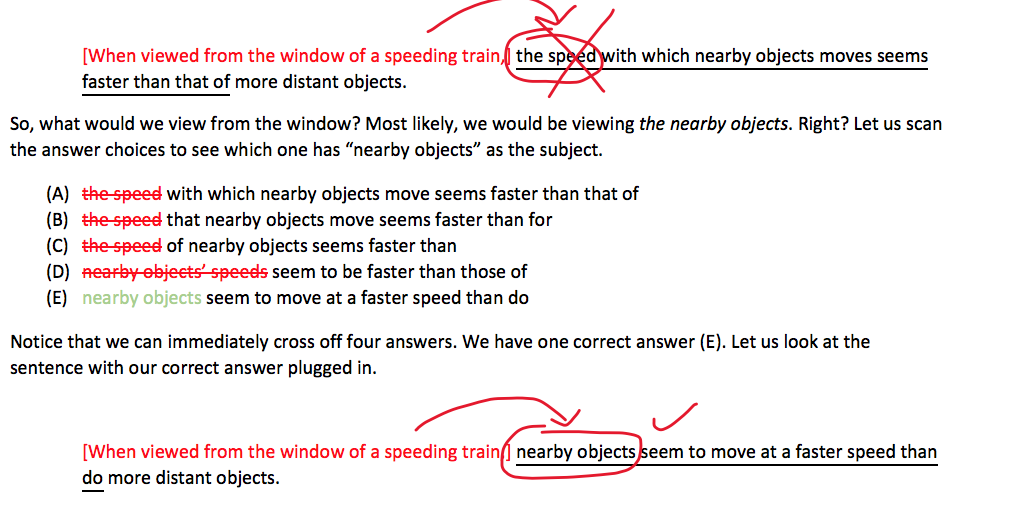 Notice that we can immediately cross off four answers. We have one correct answer (E). Let us look at the sentence with our correct answer plugged in.

Unlike the automobile company, whose research was based on crashes involving sport utility vehicles, the research conducted by the insurance company took into account such factors as a driver’s age, sex, and previous driving record.

As before, we will analyze the initial sentence and identify a modifier.

It looks as though we are down to (D) and (E), which both correct compare “the automobile company’s research” to “the research conducted by the insurance company.” Now we only really need to decide between two answers as opposed to five.

Our ultimate goal on Sentence Corrections is to avoid having to carefully scrutinize all five answer choices. It is much more efficient to only have to consider two or three options. Dangling modifiers is just one thing we can look for to efficiently narrow down our options.

To do well on GMAT sentence corrections, we do not necessarily have to know every single grammar rule in existence. It can be much more productive to know handful of specific grammar rules that the GMAT uses frequently. This way, we can use these specific grammar rules to eliminate two or three answers immediately and trust our ear to guide us the rest of the way. As you prepare for the Verbal section, try to identify why certain answer choices are bad (other than “it just sounds weird”). If you can say “hey, this option is wrong because it is a dangling modifier!” or “this one is wrong between the verb does not agree with the subject!” then you will likely recognize similar trends on future GMAT questions and will be able to get more questions right.

April 20, 2022 The 3 most important GMAT math formulas
April 8, 2022 How algebra is like a chainsaw: or using common sense on the GMAT
February 16, 2022 How to apply to business school with a non-traditional background
January 28, 2022 How to land that job in investment banking
January 24, 2022 GMAT Sentence Correction
January 14, 2022 How to break into the tech industry without a technical background
January 10, 2022 Investments to curb climate change are rising. Here’s what to know.
December 29, 2021 GMAT Verbal time and resource management
December 17, 2021 Utility-based data marketplaces
December 1, 2021 What you need to know about Harvard Business School
See all
navigate_beforeEdit Filters closeClose
Clear Tags closeClose