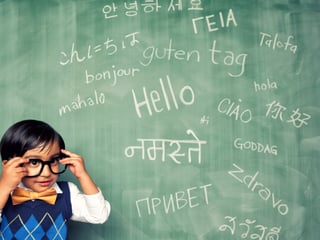 Ever find yourself at the beginning of another school year, in the language classroom, and unable to utter a word? It’s common to all second- (and third-, etc.) language learners, but it doesn’t have to be! Here are some tips on how to keep up a new language during a long break from study.

1. Find a community of speakers

Find a community of like-minded, committed learners of your target language. Set up a weekly summer language lunch in which you pledge to speak in and only in the target language. If you run out of things to talk about, you could bring short, simple poems to read and discuss. And if your evenings are free, have people over for a foreign language movie night.

Speaking of movies, many public libraries have impressive foreign language film collections. If the “International” section of Netflix, the Internet Archive, or YouTube doesn’t cut it for you, head to your local library’s website and look up, order, or check out those Japanese, French, Wolof - you name it - films you want to watch to help you hold onto a new language.

Then there’s music. For auditory learners, having a podcast handy might be worth composing three essays in the target language. The Interwebs here are again of prime importance. Say you’re learning a new language like Tamil. A quick Wikipedia search of popular Tamil artists yields Harris Jayaraj. There’s also Anirudh Ravichander, whose song “Why This Kolaveri Di?” is actually pretty catchy!

Often when learning another langauge the culture can get in the way. How to understand modern Hebrew if you don’t also imbibe all kinds of assumptions inherent in Israeli culture? The same goes for any language, any culture. If you’re learning modern Hebrew, you could check out the (well-translated) novels of Amos Oz, A.B. Yehoshua or Sami Mikhael to learn more about Israeli culture. You could also find yourself an accessible book on the history of Israel, such as Ari Shavit’s My Promised Land. And so it goes for any new language, any culture.

One storehouse of a culture’s assumptions and values is its poetry. As they say in Arabic, “Poetry is the register of the Arabs.” So if you can, seek out short, easy poems in your target language - love poems, lyrics - and memorize them. It might sound daunting at first, but nothing breaks down barriers between a second-language learner and a native speaker than an apt cultural reference to, say, a poem the native speaker probably learned in elementary school. (They say smell is the most evocative of the senses, but it’s actually poetry.) And besides impressing the heck out of native speakers, memorizing short poems allows you to inhabit an imaginative world of your own in another language. You can see the world from that language’s point of view and enrich your own perspective.

Finally, what use would it be to learn a new language like Haitian Creole if you didn’t known any Haitians? Reach out to local communities that speak your target language. If there are any consulates, embassies, or cultural centers where you live, figure out what sort of events they host and attend lectures, films, or galas. Often these places exist to promote the languages and cultures of the countries concerned. These could also be the perfect opportunities to slip in that apt cultural reference and make a new friend!

To be clear, the best way to hold on to, or develop, a second language during the summer is to go to wherever they speak that language and find yourself an intensive language program. And a homestay. If you’re in high school, college, or graduate school, hundreds of scholarships are available to make that happen. But since that option isn’t open to everyone, I hope the above tips cna lead some of you in the right direction!

Are you looking for a language tutor in Boston or New York, or online anywhere in the world?

Want to read more on learning a new language? Check out some of the previous blog posts below:

What’s the International Phonetic Alphabet and What’s so Great About it?

A Review of Duolingo: Is it Really Worth Your Time?