How to prove the Pythagorean Theorem

The Pythagorean Theorem plays an essential role in many facets of math from Euclidean Geometry to complex numbers to trigonometry. Today we’ll explore one of its many proofs.

Let’s start with the following figure:

Here we have two squares placed side by side. Our goal will be to cut these squares up into pieces and rearrange the pieces such that they form a new, larger square. If we can do this, we will have created a new square with an area equal to the sum of the areas of the two original squares. (Hopefully this should ring a bell and relate back to the Pythagorean theorem).

First try this on your own, and if you’re still stuck after a few minutes, read on!

Our first step will be to add a point (let’s call it P) to DC such that DP=CE. Now let’s create line segments AP and PF. What do we know about these two segments? Why? 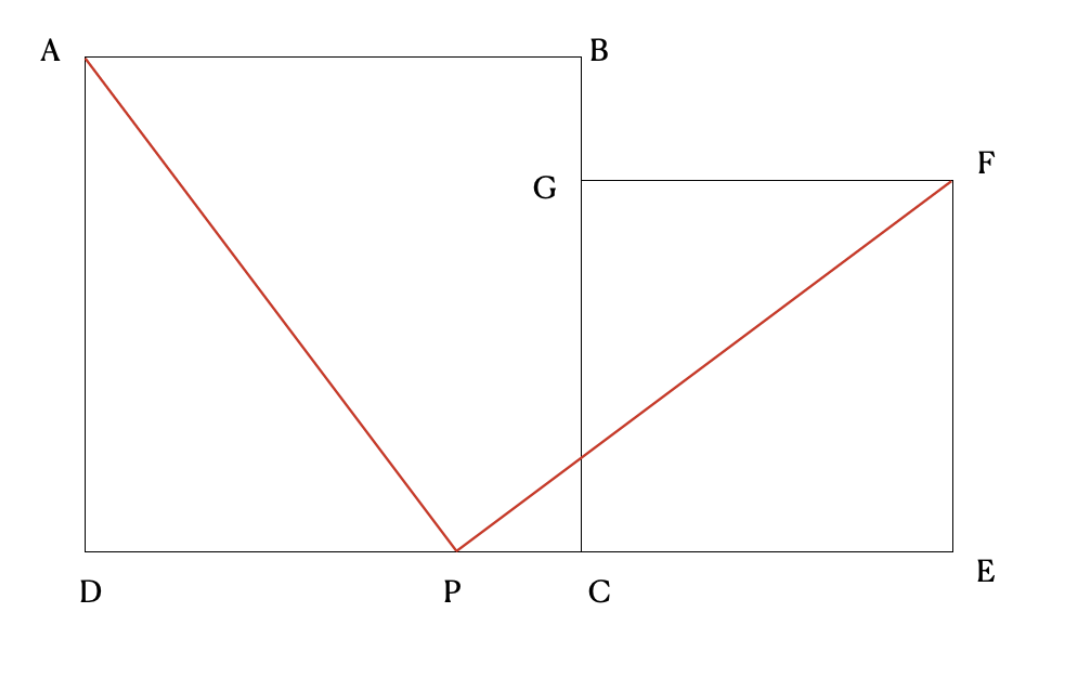 We also know that DE=DC+CE and DE=DP+PE. Because DP=CE, we can replace DP with CE in the prior equation to give us DE=CE+PE. From this it follows that DE-CE=PE and DE-CE=DC. Again, by the transitive property, PE=DC. Because ABCD is a square, PE=AD.

If you’re confused at this point, go back and give the two squares actual dimensions (say CE=3 and DC=4), and try to come to the same conclusion about AP and PF; then come back and work your way through the generalized proof. Or, take a look at this color coded figure, and see if it helps. 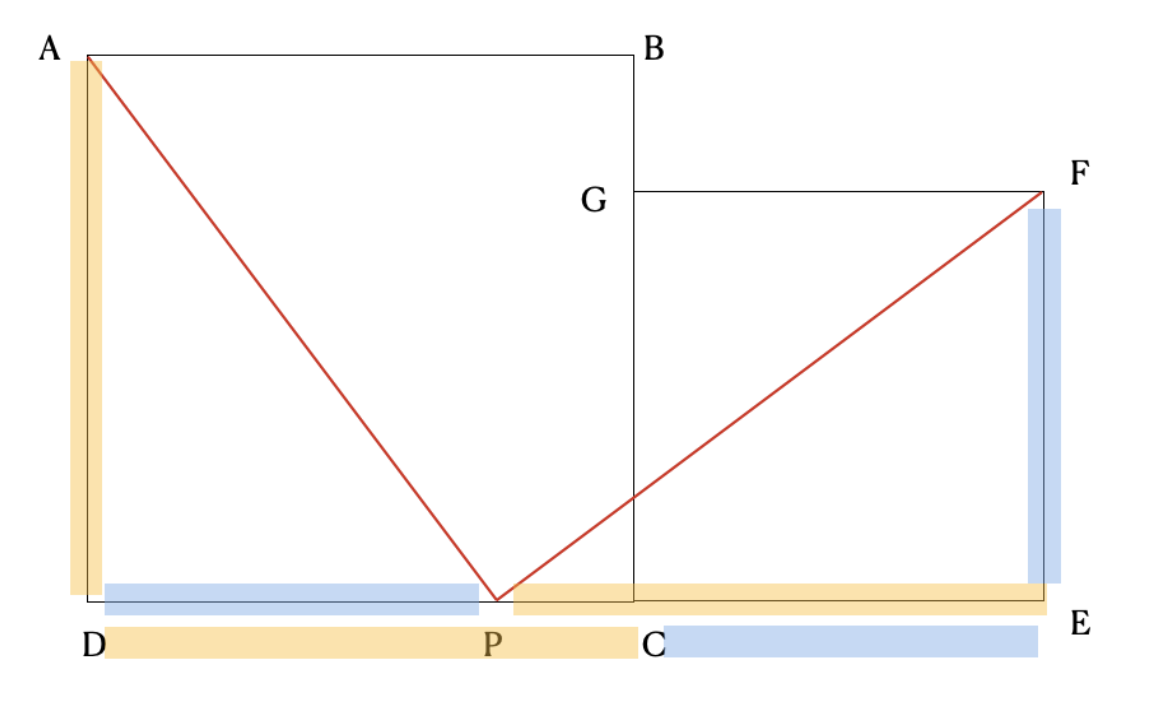 Look at the figure again… did you notice that AP creates the hypotenuse of a triangle with side lengths equivalent to the side lengths of our two original squares? We’ll store this information in our back pocket for now and continue our original task: cutting up these squares to form a new square.

First we’ll remove triangle PFE, rotate it 90 degrees clockwise and move it upwards so that FE aligns with GF. Here’s what it will look like: 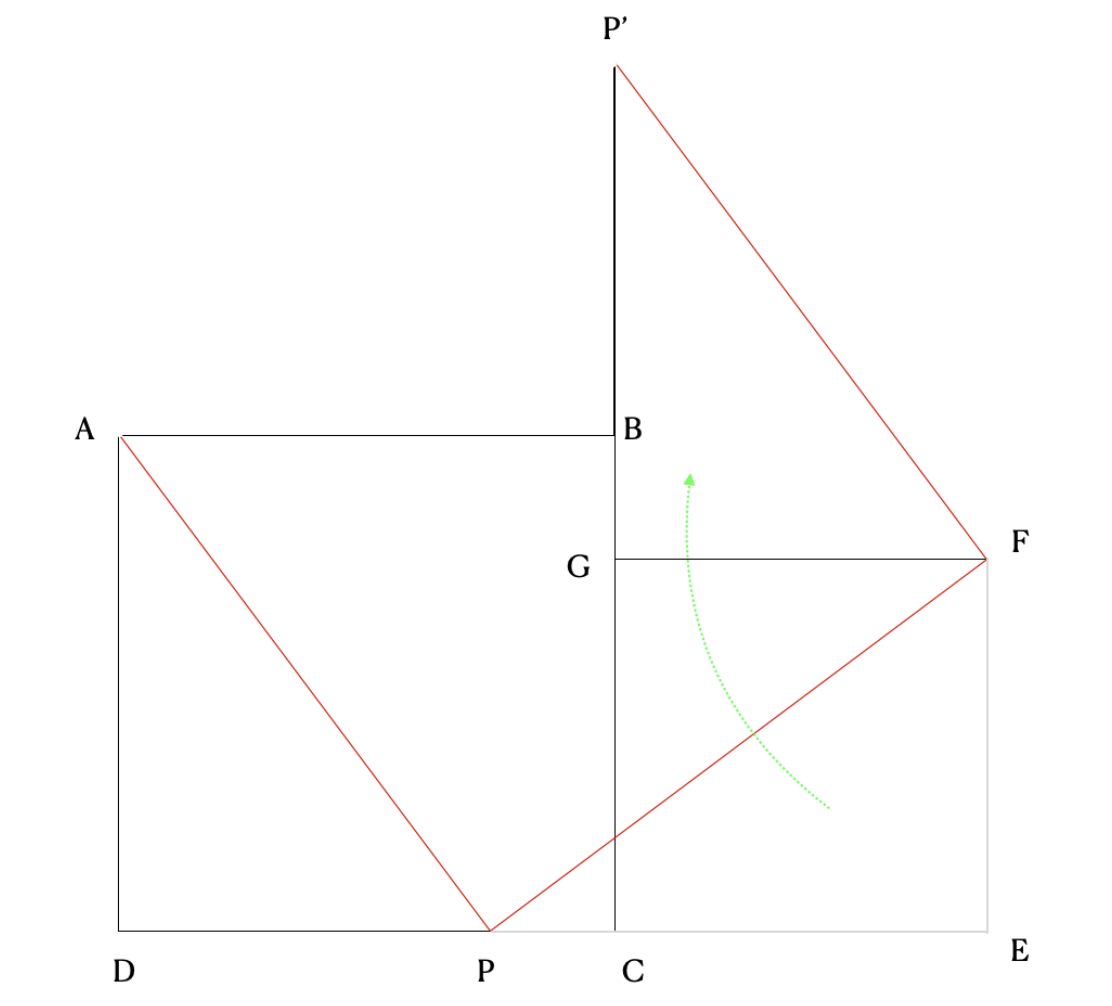 We will manipulate triangle ADP similarly so that AD lines up with AB: 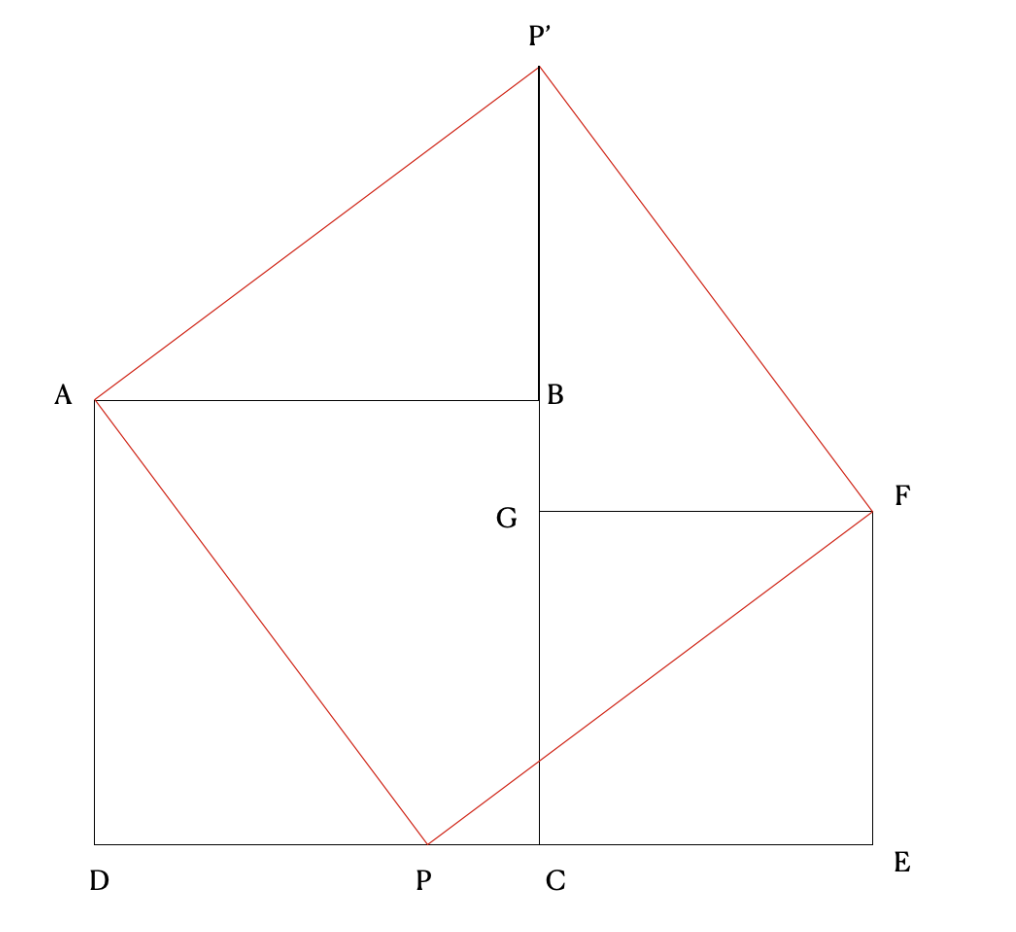 What do we have left to show to complete our proof? See if you can finish the proof on your own!

We’ll start by manipulating BG, expressing it as differences of other segments, and replacing these with segments we have previously shown to be congruent to get:

Going back to our original two squares, we have

When we rotate ADP and stack DP onto BG, we then know that DG will be congruent to the rotated segment PE, which gets stacked onto GF. Therefore, our two rotated triangles will intersect in the same point P’

We have now shown that there exists a quadrilateral PAP’F, and our prior work (in the proving congruency section) tells us that this quadrilateral has four congruent sides. To prove that it is a square, we need to show that it has one right angle.

Because there are 180 degrees in a triangle and ADP is right in D by construction, angles DAP and APD must add to 90 degrees. Because triangles ADP and PEF are congruent (as previously shown), angles DAP and EPF are congruent. Thus angles APD and FPE must add to 90, and therefore the measure of angle APF must be 90 degrees because APD, APF, and FPE are supplementary.

Therefore, AP’FP is a square and its area is the sum of the areas of ABCD and GFEC.

For any right triangle, the sum of the squares of the two shorter sides will equal the square of the hypotenuse.