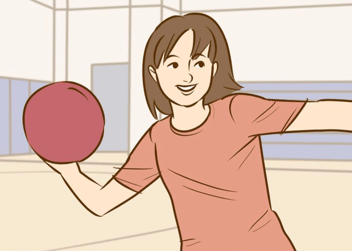 This article is the second chapter in a series on how to understand and approach kinematics problems. The first chapter covered position, velocity, and acceleration. Now that we understand these quantities, we are going to use them to solve problems in one dimension.

The four horsemen of the kinematics apocalypse are:

For every one dimensional kinematics problem, the steps are pretty much the same.

Yes, it really is that simple. (In fact, most physics problems work the same way. For more details on the physics problem solving algorithm, check out this article.)

Sometimes the problem may tell you a quantity secretly; you may not even realize you got it. For example, if they tell you the displacement (how far something travelled) but not positions, you can treat the displacement as xf and set xi to 0. Likewise, if the problem doesn’t say anything special about acceleration, then the acceleration is probably just gravity, a = g = 9.8m/s2. These hidden quantities are as valid as regular quantities, they are just a little harder to spot.

A special example of the hidden quantity is when they tell you an object is at “the top of its flight/motion/path/etc.” This means they are secretly telling you that vf is 0 because an object traveling in one dimension always has a velocity of 0 at the top of its path. Wondering why? Well, if the velocity was going up, then a millisecond later, the object would be higher (and thus it can’t be at the top of its path). Likewise, if the object had a velocity downward, then it would have been higher a millisecond before (so it can’t be at the top either).

Example: A Woman and Her Ball

Part A: How high does the ball reach?

The position at the top of the throw, xf

Part B: How long does the ball take to hit the ground?

Note: Since the ball is now on the ground instead of at the top of it’s flight, vf ≠ 0 so that is off the table.

This is a quadratic equation (ax2 + bx + c = 0) and can be solved using the quadratic formula.

We can ignore t=-.17 because we are not allowed to have a negative time (we call this a non-physical answer), which leaves us with time = 1.2 seconds!

We have so many quantities we could use any of the equations, but let’s go with vf - vi = a*t because it’s simple and we haven’t used it yet.

Boom, the velocity when the ball hits the ground is 6.8 m/s downward (thus the negative sign)

We now know how to use our kinematics equations to solve problems in one dimension. In our next blog, we’ll discuss how to “butcher” vectors in preparation for Kinematics in 2-Dimensions.