How to tell the difference between mitosis and meiosis

If you’ve ever taken a biology class, you’ve most likely come across the concept of the cell cycle. Put simply, the cell cycle is the growth of cells, the replication of DNA, and the subsequent division of DNA, organelles, and cytoplasm that creates new cells. For eukaryotes, cell division is an essential part of both growth and reproduction. However, autosomal cells (cells of the body) and gametocytes (germ cells, or reproductive cells) divide in two different ways. We call these processes mitosis and meiosis, respectively.

It’s not always easy to remember what distinguishes each process, so we’ll break down the key differences here. But before we get into the details, let’s understand some basics:

Autosomal cells are diploid (2n). This means that they have 2 versions of each chromosome–one that came from mom, and one from dad. The human genome has 23 chromosomes, so each autosomal cell carries 46 chromosomes in total.

Gametes (sperm and egg cells) are haploid (n). This means that they have only 1 version of each chromosome. Each gamete carries 23 chromosomes in total. When 2 gametes combine during fertilization, the resulting zygote is diploid (2n), and has 46 chromosomes.

In the G1 phase of the cell cycle, the cell grows in size and creates more organelles.

In the S phase, the cell replicates all of its DNA. This does NOT mean that there are now 92 chromosomes, it just means that all 46 chromosomes have 2x the amount of normal DNA.

In the G2 phase, the cell once again grows. It also checks to make sure that a) it’s big enough to divide, and b) no mistakes have been made in DNA replication.

In the M phase, or mitosis and cytokinesis, the cell finally divides. It begins with prophase. 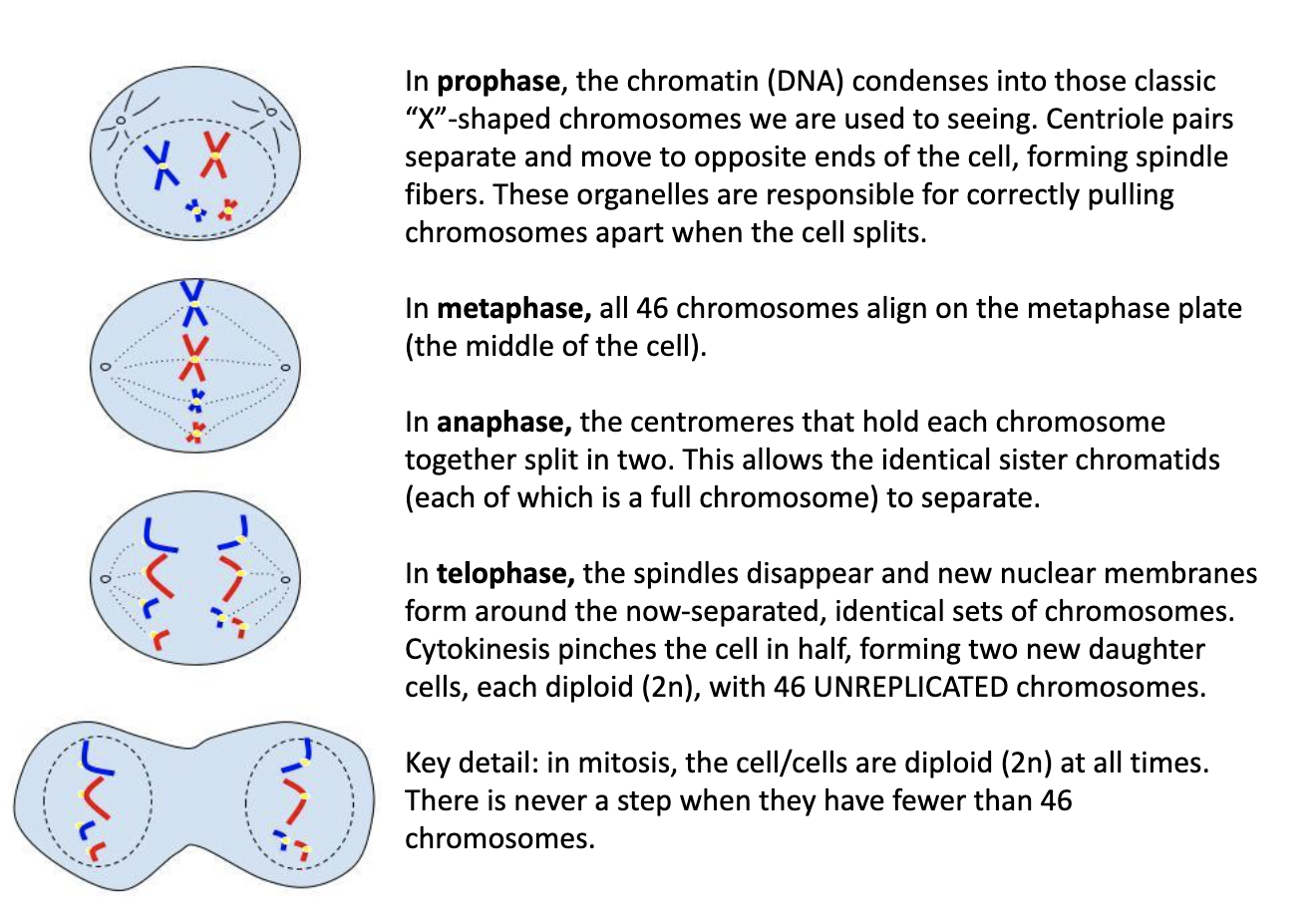 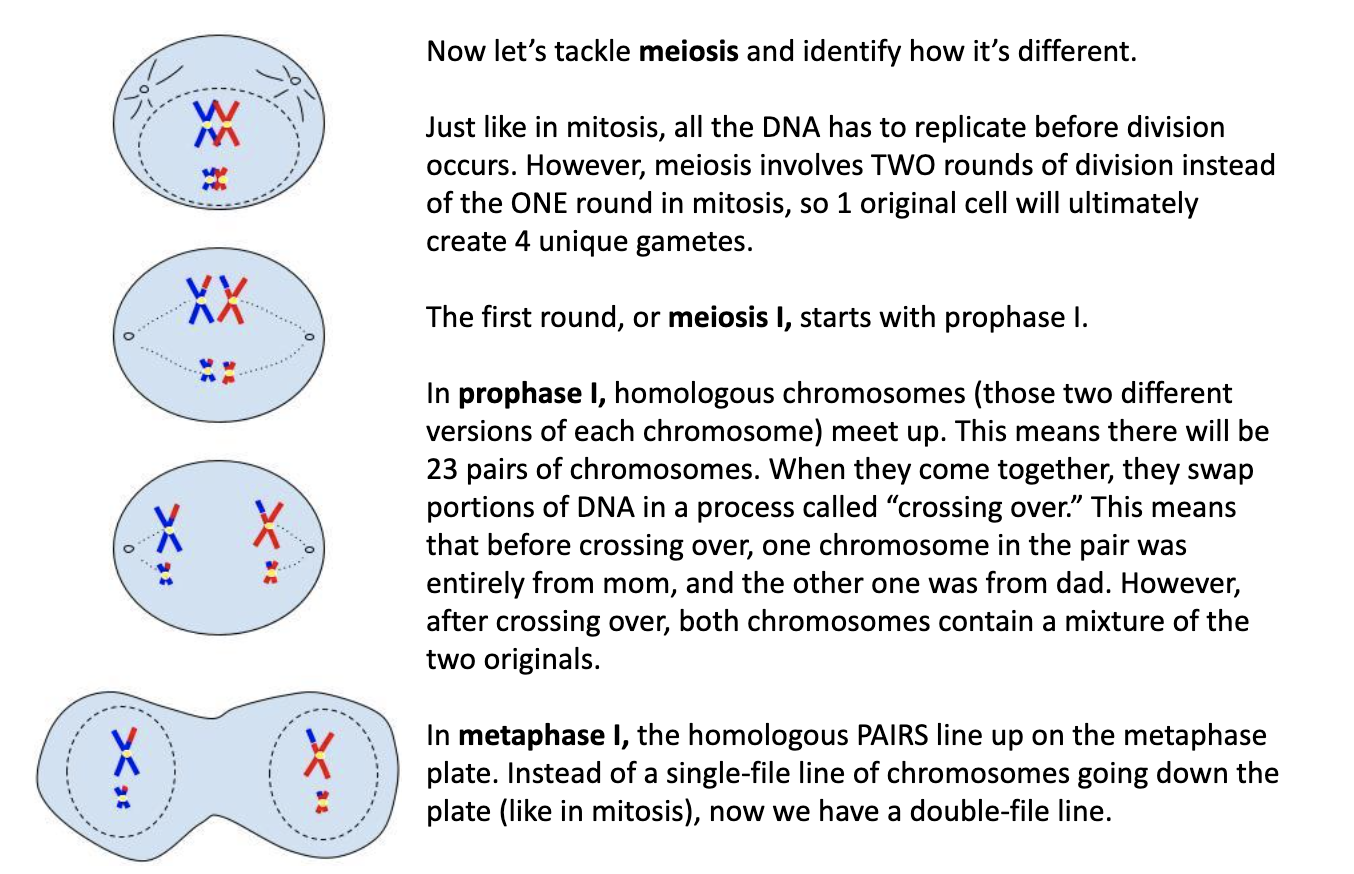 In anaphase I, the homologous pairs separate. Unlike in anaphase of mitosis, the centromeres of each individual chromosome do not split and separate sister chromatids; instead the entire chromosome moves toward one end of the cell, away from its partner.

In telophase I, much like telophase of mitosis, nuclear membranes reform around each new nucleus. The key difference is that once cytokinesis pinches off the two new cells, both are now HAPLOID (n). They contain only 23 chromosomes, but each consists of two chromatids. These chromatids would be identical, except the crossing over in prophase I has given them random portions of DNA from the homologous chromosome now in the OTHER cell. 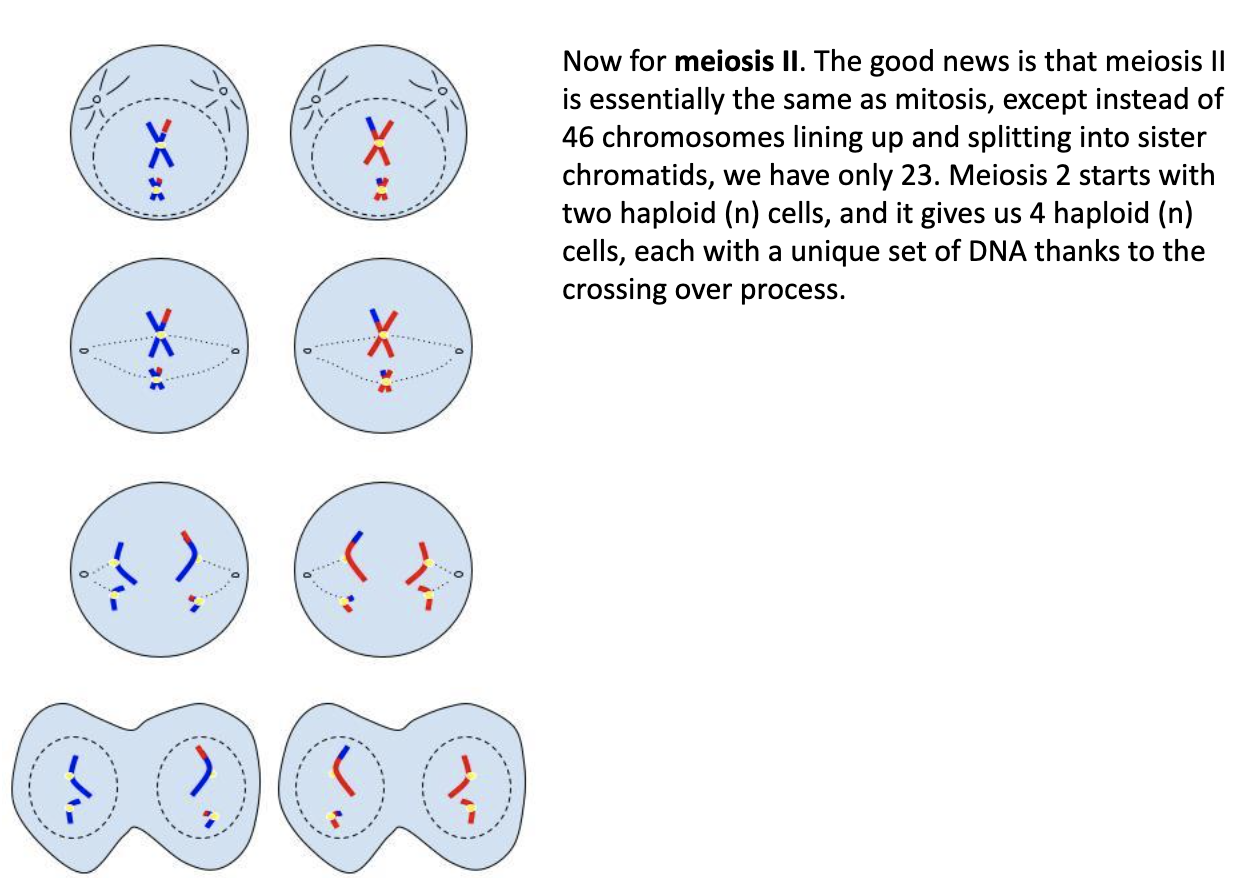