You’ve made it through algebra: now it is time to start talking about functions. While functions are often used to make upper-level mathematics easier to understand, they can be confusing at first. So – what is a function? How do functions relate to the algebraic equations we have used before? And how do they help us with mathematics and computer science?

What is a function?

In short, a function:

What does that mean?

Let’s start with rule #1 - a function is a way of expressing a relationship between two or more variables. For example, if I want to describe a relationship between the variable x and the variable y, I might write y = 2x. You have likely seen equations that look like y = 2x before, and, as you probably know, this equation tells me that for every value of x I choose, the value of y will be double that value. In other words, I know that:

However, while y = 2x is certainly an example of a function, functions are more commonly written in a form that looks like this:

Before we discuss what this new form means and why it is useful, let’s review some key terms.

Independent variable: the variable that is changed by the experimenter. For example, imagine I am studying the effect of milk consumption on a child’s height. To set up this experiment, I might pick a period of time – say, a year – and, over that period, have one child drink one gallon of milk, another child drink ten gallons, and a third child drink a hundred gallons. At the end of the year, I might measure how many inches taller each child grew. Because I (the experimenter) am choosing how much milk is consumed by each person, the amount of milk (1, 10, or 100 gallons) is the independent variable. Commonly, the independent variable is expressed as x.

This form holds true for all types of variables. For example, if I were to choose the letter a instead of x for my independent variable, I would write the dependent variable as f(a), to indicate that it is a function of a.

Here’s an example of a question you might see:

“Graph both functions on the same axes:

Before we graph functions, let’s talk a little bit more about that second rule – that a function represents an equation where, for every input, there is only one output. To understand that concept, we’ll have to talk about domain and range.

Two important properties of functions are called domain and range. Codomain may also show up when you are working with functions, though you shouldn’t have to worry about codomain until you foray into higher-level math.

Unlike the domain in the example, the domains of functions you’ll see most often in algebra will be made up of more than three distinct numbers. Let’s go back to our function f(x) = 2x. The graph of this function, which we will talk about in more detail later, is below: 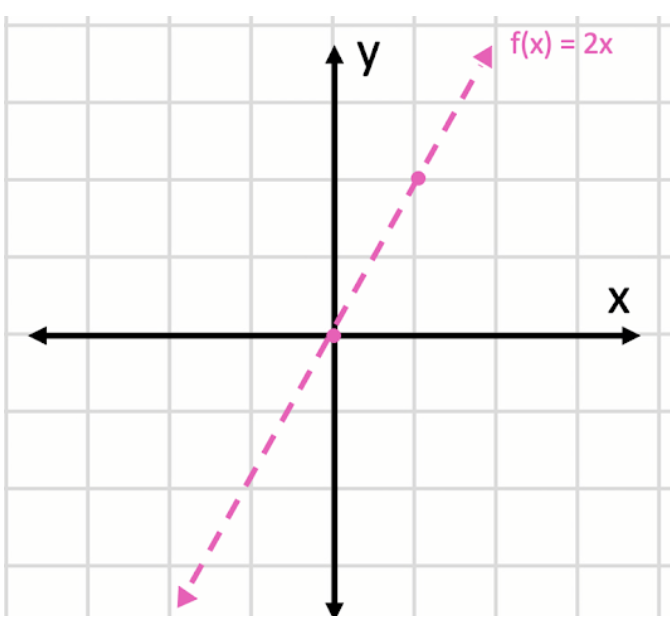 The graph of f(x) = 2x gives us a straight, diagonal line. From the chart, we see that we could find a point on the line for any value of x, positive or negative. X can be any number. The domain of x, then, can be officially expressed as the set of all real numbers. If you haven’t learned about real vs. imaginary numbers yet, don’t worry about this added word, “real” – for now, it refers to all numbers. This domain can be expressed in the following form:

The symbol R indicates all real numbers. This includes negative numbers, positive numbers, whole numbers, and decimals. There are so many numbers in R that we can’t write them out as a list (like the set {1,10,11}), so we have to use a symbol (R) instead.

The symbol indicates a set, which means that you are referring to a group of numbers (like R), rather than a few distinct numbers (like 1, 10, and 100).

Similar to domains, the ranges you’ll see in most algebraic functions will be made up of more than three distinct numbers. Let’s go back to our example of f(x) = 2x. If we look back at the graph of this function, we see that we could find a point on the line for every value of y. Y (e.g. the output of the function) can be any number. Therefore, the range of f(x) is also the set of all real numbers, and can be expressed, like the domain:

How do domain and range help us define functions?

So, how do we visualize functions? Let’s explore what it looks like to plot a function on a graph.

Both equations describe lines. You’ll recall that we can graph lines by finding two of the line’s points and drawing a straight line that goes through both points. Let’s start by finding two points (values of x and y) that fit into the equation for each function. We’ll do that by choosing a value of x and calculating the value of f(x) or g(x) when we plug our value of x into the function (otherwise known as evaluating the function).

We know, then, that both lines have a y-value of 0 when they have an x-value of 0. In other words, we know both lines go through the point (0,0).

We are then left with two points for each line:

If we plot the two points for each function and draw a line through each set, we get the following two lines.

To reiterate, plotting f(x) = 2x is just like plotting y = 2x. In two-dimensional equations, the output of the function (f(x)) simply represents the value on the y-axis.

Applications of Functions in Mathematics and Computer Science

So why is it useful to think about equations like this? Functions play a role in many types of mathematics. They even form the basis of computer science. Here are some ways you’ll continue to see functions as you advance in your math education:

Calculus: Functions are an important part of calculus, which is the study of “continuous change.” That means that calculus is concerned not with points on a graph where x = 1, 2, or 3, but with, for example, all of the points in between x = 0 and x = 1 – the hundredths, thousandths, millionths, and so on. Calculus is concerned with the intervals that are too small to characterize point by point, and that’s where functions can be helpful. They can describe the way a line behaves without needing to reference individual points.

Several variables: Functions are also useful for characterizing relationships between several variables at once. The functions we talked about in this post had one input and one output, and looked like this: 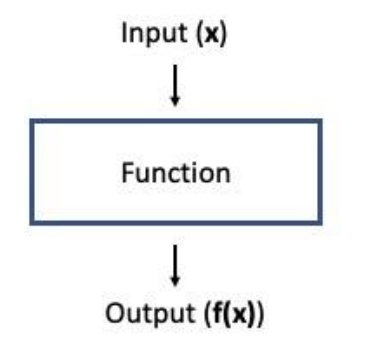 However, functions can have more than one input, and, when graphed, can represent structures in 3, 4, 5, or more dimensions. Those functions are called multivariable functions and may look more like this: 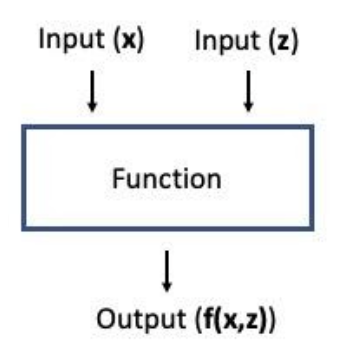 Computer science: Function logic also guides computer science. Think about commands on a computer. Maybe you want the computer to play a song when you click on the song’s name in Spotify. That’s a function; you have an input (the click) that produces an output (the song playing), just like f(x) = 2x. In f(x) = 2x, as we discussed, our input (x) also produces an output (f(x)).