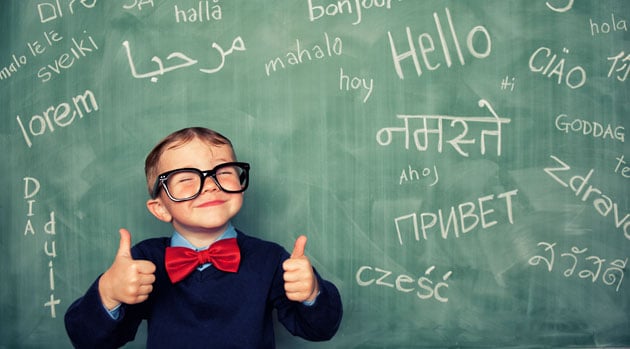 One of the biggest obstacles to foreign language learning, in my opinion, is a frustrating sort of double bind that many amateurs encounter. On the one hand, new students are encouraged to expose themselves to a healthy dose of that language’s culture (its customs, traditions, singularities, etc.) And as fugacious a task this may be — what is culture, anyways? — the only way that students can perceive another culture is via the filter of their own. In short, language learning is inevitably “colored” by one’s own experiences and by one’s one situatedness in their own linguistic frame; driving to the fabled “essence” of a different culture just isn’t possible. (Moreover, some would even go so far as to question how much of an “essence” any one culture may lay claim to.)  I would argue that the best way to circumvent this frustrating situation is to work within the concrete, defined set of boundaries and nuances that we can indeed begin to understand – that is to say, grammar! A solid comprehension of the purring cogs and wheels that regulate the innards of spoken language might not necessarily or even immediately help us know what makes that language’s culture “tick”. However, it does give us a firm launching point from which we are better able to realize, appreciate, and situate the various degrees of significance in those moments when rules are indeed eventually broken.

What’s in a name?

I recently emerged from an experience that prompted me to reflect on what it is we valorize about another language’s culture in the process of language learning, precisely thanks to a grammatical oddity. While meandering through a shopping mall last week, waiting for my husband to emerge from the battlefield that is the men’s dressing room, I stumbled upon a most curiously named store. To avoid incurring undue amounts of commercial ire and for the sheer purpose of explaining the flurry of ensuing reflections, let’s simply say that the store was called Beautéé. The French-inclined portion of my brain immediately seized upon this title. Granted, part of the store’s name is a cognate that most English speakers would grasp without too much prodding or hinting. On a purely visual level, Beautéé is indeed very close to beauty – and therefore in the eye of the beholder after all! The central cluster of letters b-e-a-u that is common to both words provides a strong foothold for our divining minds to clamber between one conclusion and the next.

In order to combat this tendency which can lead to fallacious (if not humorous) outcomes, even on a small scale, I would urge readers to put more stock in their consideration of the languages that surround them. Being biased by personal experience, I would, of course, encourage you to learn French as part of this process! However, the exigency of thinking about the words that define our daily lives, which free us or limit our communicative scope in so many contexts, merits careful attention no matter what language we deal in.

Respect for your Native Language

Interestingly enough, I have found that studying foreign languages has instilled a deeper respect and curiosity for my native language, English. When one devotes concentrated effort and time to learning how to construct a coherent sentence in any other language (even if that language is not as closely related as French is to English), a certain appreciation for complexity and difference is cultivated in one’s mind. In fact, I have found that encountering stark differences within other languages forces me to step back and establish a point of comparison with what I do know, and thereby begin to value and reflect further upon linguistic usages and syntactic forms that I had otherwise taken for granted. After over a decade of studying French at an intensive level, I can confidently affirm that my writing in English has improved. This is notably because of the caution and attention I have developed in my approach to French, which then applies itself subtly to the words I string together in my mother tongue; like a filter applied to the way we see and write the world, the attentiveness and care which one is forced to employ in other languages can seep back into English. Beyond avoiding stepping on any grammatical toes with regard to the use of proper French, I would argue that knowing another language well helps us in turn to master our own native language, and thus to better know ourselves. Instead of falling back on perceived stereotypes in the hopes of evoking some cultural fantasma, zeitgeist, or ambiance, I would encourage us all to slow down and consider the complexity of the languages binding us to the various facets of life, spanning from the humdrum quotidian to ideologies and paradigms.

From where we are individually situated within the context of our own linguistic frame, the best place to begin exploring the reaches of another such frame will inevitably involve grammar. For some people, this might seem an unsavory proposition, but I would instead argue for a renewed appreciation for that which grammatical rules unveil in our day-to-day lives. With a clear comprehension of linguistic building blocks, one has the tools to directly begin situating themselves within a different language’s frame of mind. Getting a grip on grammar (while simultaneously cultivating an appreciation for what grammar can reveal to us) is an important first step for any person seeking to learn a language well. Cambridge Coaching offers a unique experience to build upon and develop these skills, and I for one would be enchantée (and NOT “enchantéé”!) to join you on that journey.

Are you interested in working with Emma on your French?

If you're interesting in learning other languages, you should check out the following blog posts below!