Ever wonder why when you try to imitate native Spanish speakers it just doesn’t come out right? It might have something to do with syllables!

To begin, Spanish syllables are based on the behavior of the vowels, so let’s review those first: the basic vowels are a, e, i, o, u, like in English.

The vowels are divided into two categories, strong and weak. 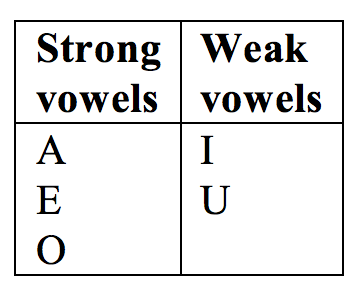 Each vowel by itself counts, of course, as one syllable. Some examples:

Do you notice anything about the order of vowels and consonants in these words?

All of these words contain only 1 vowel surrounded by consonants. But what about words like escritorio, caer, lengua, pueblo, canción, aerolínea, and huipil with 2 consecutive vowels? How many syllables does each of these words have?

For this, we focus on the combinations of strong and weak vowels.

Second, count the total syllables in each word. (Hint: ignore the acentos for this—they won’t impact the syllable count.)

So, if these acentos don’t affect syllable count, why are they there?

1. They affect which syllable is stressed in pronunciation. More on this in a bit.

2. There are some acentos that will affect syllable count. Let’s talk about diphthong (diptongo) and hiatus (hiato). We’ll begin here.

Why does this matter?

The stressed syllable is in bold.

Aéreo: 4 syllables, neither diptongo nor hiato (remember that this is not diptongo because these are all strong vowels)

February 3, 2023 How to make the most of your college visits
January 27, 2023 5 Tips for writing lab reports
January 23, 2023 How to tackle 10 tough admissions interview questions
January 11, 2023 How to make the college admissions process less stressful and more rewarding
January 6, 2023 Writing advice: know your audience!
January 4, 2023 How to apply to Brown University
December 26, 2022 The power of Python
December 21, 2022 How to write the Common App essay
December 19, 2022 Why does chemistry seem so difficult?
December 16, 2022 Avoiding the “Tragedy of the Commons" or the key to a killer Common App essay
See all
navigate_beforeEdit Filters closeClose
Clear Tags closeClose