What’s the difference between stiff, strong, and tough?

Though the average person might think the words stiff, strong, and tough mean the same thing, engineers know that they in fact have very different meanings. Learning the difference between these terms will help you sound like a pro when discussing material properties.

To understand these terms, we need to first understand a tensile test, which is used by engineers to evaluate the behavior of a material under stress. It is conducted by pulling on a piece of material and measuring how much stress is required to stretch a material until the material fails by fracturing. The stress is defined as the force over the cross-sectional area of the sample. The strain tells us how much the material stretches and is defined as the change in length over the initial length.

From this test data, we plot stress on the y-axis and strain on the x-axis to get a stress-strain curve, which tells us how a material behaves under forces. Initially, the stress-strain curve is linear. This part of the curve is known as the elastic regime. A material deformed within this range of strain will return back to its original shape when the load is removed. Consider as an example a rubber band, which can return to its original shape after it is stretched. The slope of this linear portion is known as the elastic modulus, which is a measure of stiffness. A higher slope, or higher stiffness, means more force is required to deform the material. 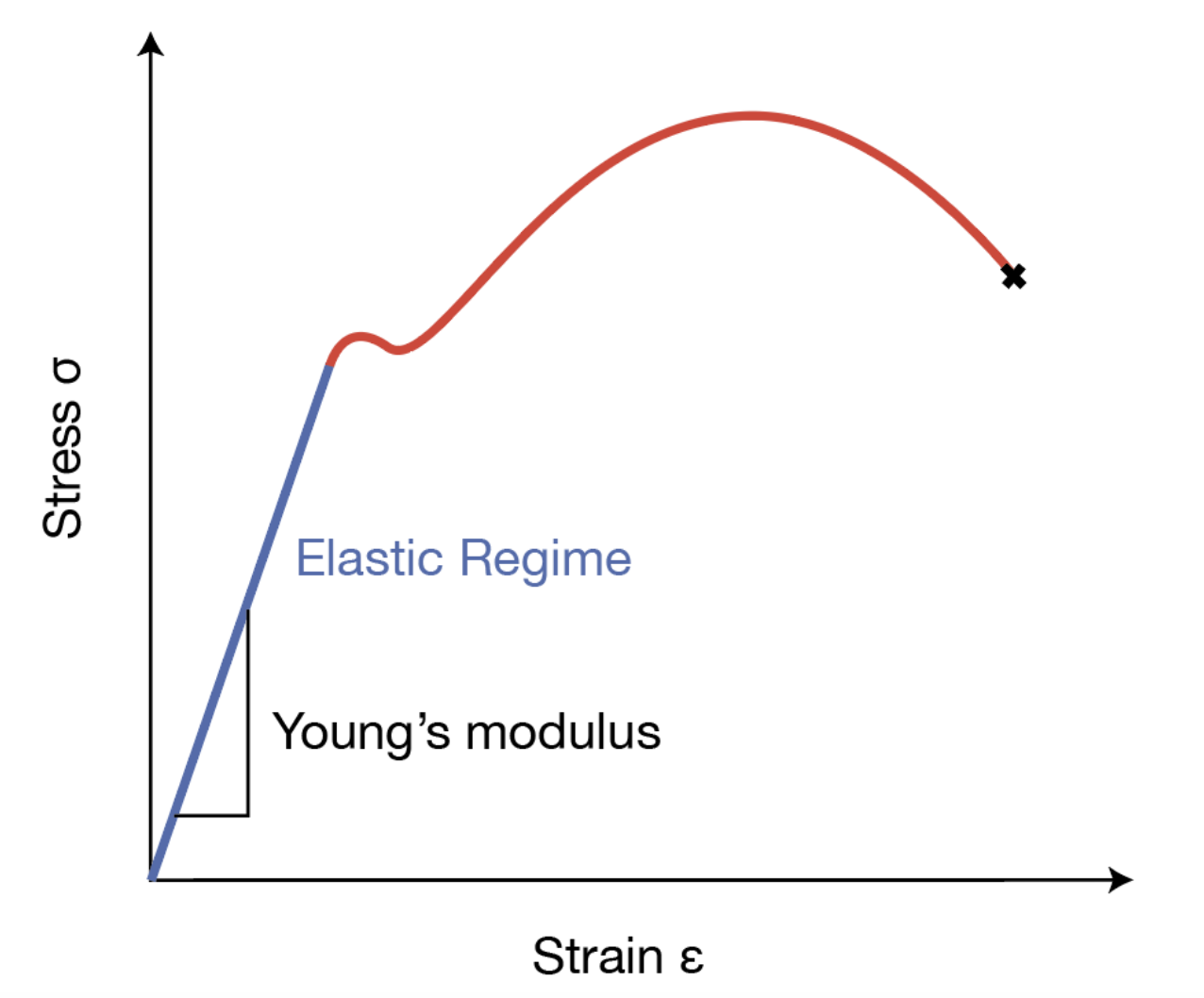 Yield strength: the point of no return

As you continue to load a material, eventually it yields. This means that if you remove the load, the material is permanently deformed, which is known as plastic deformation. Plastic deformation happens when enough stress is applied to irreversibly break the bonds between the atoms in a material.  The stress at which this transition from elastic to plastic deformation occurs is known as the yield strength. A material that is strong resists yielding, or permanently deforming. After the yield point, the stress continues to rise until it reaches its maximum, the ultimate tensile strength. This is the maximum stress that a material can withstand. Beyond this point, less stress is needed to further deform the material. 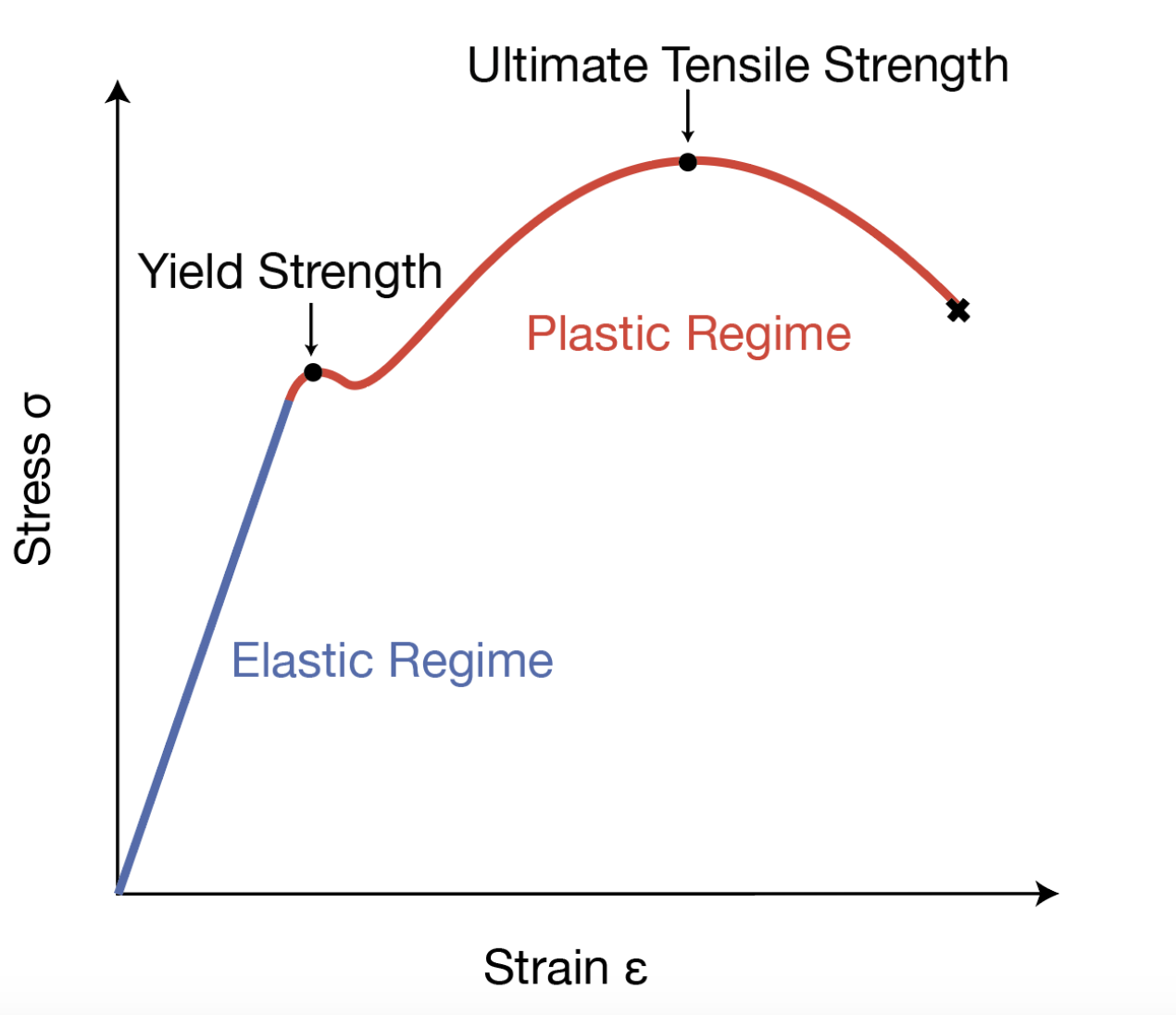 A tensile test comes to an end when a material fractures, or breaks apart. On the example graphs here, this is indicated by the x at the end of the curve. Some materials are ductile, which means they can undergo large plastic deformation without fracturing. An example is copper, which can be hammered and stretched and formed into complex shapes easily. The opposite of ductile is brittle, which means a material breaks under small deformation. A good example is glass. Though glass is a lot stiffer than copper (it takes a lot more force to stretch glass), it is also a lot more brittle, which means that it cannot deform very much at all before fracturing.

Toughness is a measure of how much energy a material can absorb before fracturing. This is defined as the area under the stress-strain curve. An example of a tough and ductile material is spring steel, which is used in springs because it can undergo large deformations without fracturing. 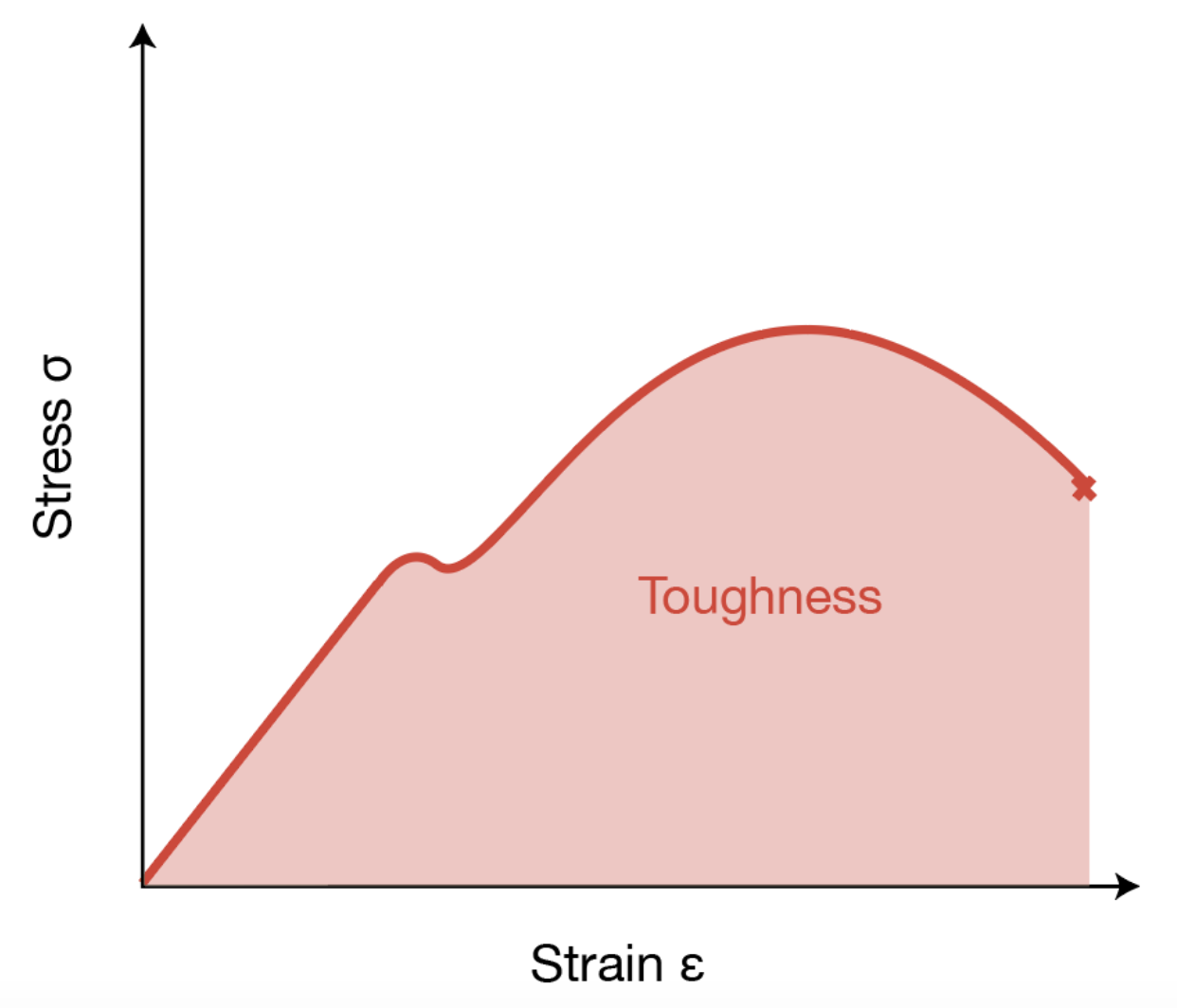 So, do you want a material that is stiff, strong, or tough? This really depends on what applications you’re thinking about, which require different properties. Sometimes, you want something to be as strong as possible, to withstand as much force without deforming, like a steel structure. Sometimes we want something flexible that is tough, like rubber, which can easily deform but can withstand large deformation without fracture. Whatever the application, it’s important to think carefully about what these terms really mean when deciding what material to use.