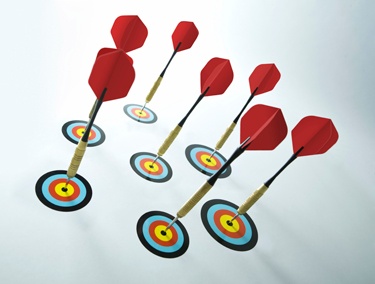 There are many opportunities to make mistakes on the GRE, and our Master tutor Greg has witnessed all of them.  With over 500 hours of experience teaching with Cambridge Coaching, he is one of the most well-qualified GRE tutors out there.  What are the most common problems he addresses?  Some of the answers may surprise you.  Greg shares his candid feedback below!

If you're absolutely convinced that it's 170 or bust, then this becomes moot.  BUT someone who just wants to go north of 160 in Q can still miss a handful of questions in each section.  This is important to note, because it's the inability to 'let go' that often leads to the double penalty -- you spent 4 minutes on a question you got wrong, but then you really paid for it at the end, when you had to rush through stuff that you coulda/shoulda/woulda gotten right.

The ideal time for a GRE question is *roughly* 1:30, with a buffer built in there for some thornier word problems that should go 2+ mins.  By practicing new problems and/or flashcards with a timer, a student can develop his/her innate sense of how long 90 seconds really is.  I had a GMAT student once who was scary good at this.  I could time him on a question, and he'd work on it, and he would tell ME when the two minutes was up without being able to see my timer.  This is one extreme, of course, but every GRE taker needs to build this awareness, because once you start going past 3+ mins, that's bad news.

I am working with a student right now who just got a 164Q/164V on a practice test.  His math started in the 150s.  He became a QC killer by doing one thing differently -- writing less.  So often with Quant Comp, there's a single "a-ha" upon which the question turns.  It's often something like "what if x is a fraction between 0 and 1?" or "what if x is negative?"  It's a natural instinctive response on a timed test to see a question and IMMEDIATELY want to put pencil to paper.  But the more someone is willing to resist this urge -- even if just for the first 10 seconds -- two great things will happen -- accuracy improves AND timing drops.  A lot of students misunderstand this and think I'm saying not to write at all, but the idea is that you just take a long (awkwardly long at first) pause before allowing any scratch marks (and then write all you want!).  It's during this time that you can often identify the *thing* behind that QC.

Let's say a problem looks *too* easy.  x + 3 =7, what is x?  Make sure the student doesn't overthink it.  Just answer it.  Just because you've got that 1:30 budgeted doesn't mean you can't solve and move on after 20 seconds when that's the right thing to do.  Then save your time for others.

This is a controversial GRE topic.  It varies from student to student.  If you find that you're getting frazzled because you skip past too many questions to return to later, you might want to mix up the strategy for a practice test -- try forcing yourself to find a way to limit these because they can become a head game (thankfully, this isn't a thing on the GMAT, you're not allowed to skip).

Timing issues are often a symptom disguised as a cause.  There's just no substitute for being good at prime factoring, at finding LCMs, at knowing how to manipulate an arithmetic mean in relation to a total, at knowing that you don't really need to find a standard deviation -- but need to know what the concept is, etc. I'm old school in this way -- make flashcards for every mistake, and then diagnose and fix until you're sure you know it.  My experience/opinion is that students who are willing to embrace this concept and apply some elbow grease make the big score gains, and the students who are too interested in the magic tricks and in the idea that I can somehow limit what they need to know in some tailored way (as if I could say, "Everyone ELSE needs to know exponent rules, but YOU don't!") aren't going to improve.

Are you feeling like you'd like some targeted suggestions on how to leverage your preparation time for the GRE?  Talk to one of our New York or Cambridge GRE tutors to help you along!

Craving more expert advice on GRE preparation?  Read some of our previous blogs below!

Tools to Cut Through the Quantitative Section of the GRE