A Guide to Your Teacher's Feedback: Common Abbreviations Defined 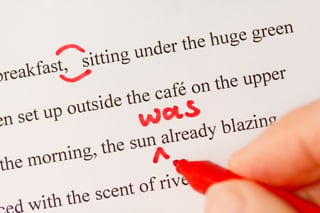 If you are a student, you have probably seen a fair share of markings on your papers to indicate errors or ideas for improvement. If you are a teacher, you have made many of these markings and know how important it is to streamline the correcting process. While individual teachers or editors may have their own systems of signaling suggestions in writing, the language of editing and proofreading comprises many abbreviations that generally convey a universal meaning.

Below are some of the most common abbreviations used in proofreading, what they mean, and how to fix the errors they identify.

short for awkward wording. This usually refers to word order or to the way a phrase sounds. Consider breaking up the sentence to make it more concise or rendering the awkward expression in different, more straightforward language.

stands for capitalization, used to indicate that a word is incorrectly capitalized or that a lowercase word should be capitalized. For example:

The people in Italy speak italian.

The People in Italy speak Italian.

stands for fragment. This points out a stand-alone phrase that is not a complete sentence. For example: Regardless of how well I do on the test.

stands for pronoun antecedent agreement. This refers to a pronoun that does not agree with the subject it represents because of the person and/or number. For example: A good student always studies for their tests. ("A good student" is a third person singular subject, whereas "their" is the third person plural possessive pronoun).

short for pronoun. Not substantially different from the preceding example, this refers to any incorrect pronoun usage. For example: You and your brother are responsible for their actions. (It should be "your actions".)

means repetition when a phrase or word is redundant. For example:

Chocolate is my favorite flavor because I like it the most.

The woman appeared nervous in appearance.

The kids ran around the playground. Then they splashed each other with water.

The kids ran around the playground and then splashed each other with water.

The kids ran around the playground before splashing each other with water.

The kids ran around the playground, and then they splashed each other with water.

short for spelling. This means there is a misspelled word.

Latin for Let it stand. This is a note from the proofreader to the writer to ignore a previously suggested correction, to let the text stand as it originally was written.

stands for subject verb. This is the same as Agr and means there is an error in the subject verb agreement. For example: The boys in the class is tall.

stands for verb tense. This means that a verb tense is not consistent with the context or with a surrounding verb. For example: Before the boy washed his face, he brushes his teeth.

Correct versions would be:

Before the boy washes his face, he brushes his teeth.

Before the boy washed his face, he brushed his teeth.

stands for wrong word. This indicates that there is a more appropriate or accurate word to choose to convey the writer's intended meaning.

For example: The girl had to choose from opulent opportunities for her internship.

A better word would be one of the following: The girl had to choose from numerous/many/abundant opportunities for her internship.

Another example: Their were a lot of people at the party.

Correct word: There were a lot of people at the party.

For more examples of proofreading abbreviations, symbols and examples, see the following sites:

Novella Abbreviations and Symbols for Editing and Proofreading

Need help from an English tutor in Boston, New York, or online?

Are you interested in reading more from our resident grammar expert?