Many students don’t know how to use the scoring scale strategically. First, they read the sample essays on the GRE website and find these examples unattainable. Second, they allocate too much time aiming for a top score of 5 or 6. Third, they’re confused if their sample essays don’t match the typical profiles for each scoring category. Here is some advice about meeting each one of these challenges.

Longer essays are typically better able to convey complex and insightful ideas, so higher-scoring essays are in the 400-650 word range, but beware: The essays that ETS posts as samples for each score are often not representative of most essays that would receive that score. For example, one of the essays scoring a six is 933 words long, whereas another essay with the same score is 627 words long. In contrast, the Manhattan GRE book on “Reading Comprehension and Essays” has samples of less-than-perfect essays that would still score a six, which feel well within reach of many more test takers. With this caveat in mind, I suggest that students begin by reading some sample essays; I usually suggest reading at least three essays with different scores, such as 4, 5, and 6, or  3, 4, and 5.

Students should also look at the analytical writing score distributions, which reveal an important lesson about the relative value of different score increases. The table is so important that I have reproduced it here. 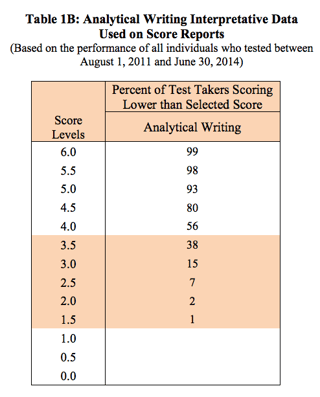 It reveals that most test takers score between 3 (15th percentile) and 4.5 (80th percentile), which means that score increases within this range represent much greater percentile jumps than scores outside of this range. In other words, a student who increases from a 4 to a 4.5 has jumped from the 56th to the 80th percentile, whereas a student who increases from 5.5 to 6 has jumped only from the 98th to the 99th percentile. All the blood, sweat, and tears that went into the final half-point increase served to bring the student just a single percentage point higher. These diminishing returns should be weighed against other uses for that extra time, e.g., on the verbal or quantitative sections, or graduate school applications.


Some essays don’t fit the mold

Over the years, I’ve tutored a number of students for whom English is not a native language. The GRE is administered around the world, and English Learner (EL) students can improve their scores through strategic work, just like native speakers. At the same time, I want to offer an important caveat: The clusters of essay characteristics used to benchmark the scoring system fit the patterns of native speakers, not EL students. For example, the model scored essays provided by ETS don’t provide a category for “has insightful analysis, clear organization, but occasional grammar errors that interfere with reader comprehension.” While extended time is available to students with documented learning disabilities, extended time is not available to EL students who need extra time to bring all of their grammatical knowledge into play. For most EL students, getting every grammatical feature correct takes extra cognitive work and additional rounds of revisions, whereas using correct grammar is a far more intuitive for the native speaker and requires little, if any, extra time. Despite the fact that the GRE is not well designed for EL students, and perhaps because of it, they tend to have just as great, if not more, of a need for tutoring as native speakers.

More on the GRE:

The GRE Tutor: How Rusty Test-Takers Can Combat Test Anxiety

GRE Vocab Help: How to Learn Vocabulary, Bird by Bird