The Path to a Cure: Chemistry in Practice 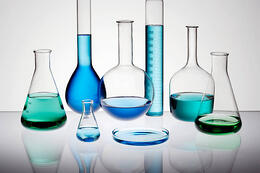 We’ve spent some time in past weeks here talking about how to approach a degree in chemistry, but what we haven’t really talked about is what you can do with that degree.

Certainly, chemistry majors (and Ph. Ds) can follow academic careers, either as chemistry tutors, school teachers or research professors, but these opportunities aren’t really unique to the field of chemistry. However, mention the fact that you’re working towards any degree in chemistry, and you’ll almost certainly be asked if you’re planning on going into the pharmaceutical industry. So today we’ll take a brief look at the life cycle of a drug, and how chemists are instrumental (but definitely not alone) in the process.

While it’s true that the pharmaceutical industry is one of the largest employers of chemists, the initial steps of the drug discovery process don’t really require any advanced chemistry background. Obviously, you first need to decide on the disease or condition you want to treat. Typically, this will be a disease where current treatment can be improved (or there’s no treatment available yet); additionally, conditions that affect large numbers of people are higher priority (the sad truth is that there’s little economic incentive to spend time and resources into developing cures for rare diseases).

Once you’ve decided on your target affliction, you need to make sure that you have a good test, or assay, to evaluate potential drug compounds. It doesn’t make sense to start out by testing in living systems, so ideally, an assay exists so that you can get an early, quantitative idea of how potential drugs will fare. Maybe there’s a particular enzyme whose activity you need to inhibit, or you’re just looking for an antibiotic to kill a certain strain of bacteria. The point is, without a reliable, fast, and inexpensive way to test a large number of compounds, you’ll never get past the next steps.

Most drug compounds aren’t designed from scratch. For various reasons it’s usually faster and less resource dependent to screen libraries of compounds for promising leads, hence the need for a rapid, reliable assay. Pharmaceutical compounds have vast libraries of compounds—often several million different molecules—to test various assays. These compounds come from a variety of sources-many are made in labs, some are isolated from exotic sources such as marine sponges or the bark of a specific tree, but all have known structures and properties. It may be that based on previous work there’s a specific structural unit that’s desirable, or a certain class of molecules that is especially promising, but in these early stages, it’s usually all about playing the numbers game. Appropriately, this phase is referred to as “high-throughput screening,” and is the realm of bioinformatic specialists. Eventually, after rounds of testing, validating results, eliminating false positives, and retesting, you’re left with one or at most, a couple, of compounds to press on with. These are your lead compounds.

Once the lead compound has been identified, it’s time for the chemists to get involved. Just because the lead compound performed well in the initial assays doesn’t mean that it is the best choice for the final product. At this time, advanced testing will also begin; this will help determine whether the lead compound is “drug-like” enough or needs improvement. Does it actually cure the disease in animals? Is it metabolized to dangerous side-products in the body? Does it cause any side effects? Chances are that the compound will need a little work before moving forward—maybe it cures the disease well, but it is excreted from the body too quickly, for example. Then, it’s up to medicinal chemists to make specific changes to the molecule’s structure to try to address these issues. After several rounds of modification and retesting, the goal is to have the safest, most potent drug to carry forward.

It’s important to note that the amounts of material that we’re talking about up to this stage are very small—just hundreds of milligrams is usually enough to carry out all the required testing. Here is where things change—the project is passed onto process chemists. At this point, the target, or active pharmaceutical ingredient (API) is known, and the chemists have to figure out how to make it—and lots of it—as efficiently and safely as possible. This means replacing or reducing the amounts of toxic or expensive reagents, while eliminating or combining synthetic steps. This is a great opportunity to develop practical chemical solutions to pressing issues. Once the synthetic route to the API has been optimized, a pilot run will be conducted to produce kilograms of the drug. If this is successful, the process continues.

With more material on hand, the companies can really start large-scale testing. Testing here also includes the specific formulation in which a drug will be administered—can it be made into a pill or will it need to be injected? Once basic tests indicate that the drug is both safe for humans and does have a positive effect on the desired condition, the company may pursue official clinical trials. As the name implies, these trials are conducted in hospitals and clinics, so the power has once again left chemists’ hands and now lies with medical doctors. These are both larger in scale and longer in duration than any previous studies, and are the last hurdle to clear before the FDA decides on whether or not to approve a drug.

The drug development process is a long and expensive process—it is estimated that the average drug takes 14 years from its initial discovery to reach the market, at a cost surpassing several hundreds of millions of dollars. To make things worse, the success rate is extremely low—for each drug that makes it to market, there are literally thousands that must be discarded for various reasons. In the worst cases, projects have been cancelled at late stages, essentially resulting in losses nearing $1 billion. In order to minimize risk, the field truly needs a steady supply of able, talented chemists, particularly those who enjoy working across disciplinary borders, to further streamline the process and bring new medicines to market.