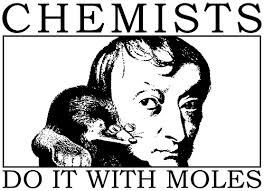 Anyone who has had some contact with chemistry knows how important the mole is to chemistry.

So what’s this mole got to do with chemistry anyway?

In chemistry, the mole is used to avoid working with inconvenient numbers. For instance, it is annoying to say 6.02*1023 molecules and much easier to say 1 mole. By the way, 6.02*1023 is also known as Avogradro’s number.

The mole is so important to chemistry because chemists no longer work with large/ inconvenient numbers, but instead use the mole as a unit.  The mole bridges all the different quantities you will come across in chemistry problems. For example, in a chemical reaction, the coefficients tell you about the moles of that particular molecule.

How to deal with mole calculations in chemical reactions?

Let’s say you have to balance the following equation:

To do this, you have to make sure you have the same number of atoms in both sides of the equation, for each of the atoms present in the equation. So, you have 3 moles of C on the left side, but just one on the right side. To increase the number of C on the right, you can just add a number 3 in front of CO2.. When you add a coefficient, you calculate the number of atoms by multiplying the coefficient with the subscript. For example, once you put the number 3 in front of CO2, you now have 3*2=6 Os from the CO2. .

After balancing the equation, you get:

Let’s say the question next asks you to calculate the number of moles of CO2 when 15 moles of O2 are used. These kinds of questions can confuse students, but the trick I use in solving these problems is to pretend I am following a cooking recipe. The coefficients are units and the molecules are cooking ingredients.

Here is how it goes:

Well, if I were cooking, I would multiply everything with 3 in my recipe, so I would need 3 ingredients A (C3H8), and I would make nine C products (CO2) and twelve D products (O2). So the new equation would look like:

Remember, what I suggested here is just one way of approaching these problems. A different way might work better for you. For additional homework help with chemistry whether for high school or college academics, talk to a chemistry tutor.