The Writing Tutor: The Vital Importance of Writing Badly

This is the first in a series from our resident novelist on writing and editing.  Today, to help you deal with the most intimidating thing of all, the blank page, we offer some remedies for that most mythic of literary ailments: writer’s block.

I hate the term “creative writing.”  I tend to put it in quotation marks.  Why?  Because it suggests that there is such a thing as uncreative writing.  There is not.  There is good writing and there is bad writing, but all of it is necessarily creative.  Whether it’s a poem, an article on the spread of tuberculosis in Bangladesh, the typed-up minutes of a homeowners’ association meeting, or a blog post on the Knicks’ wretched draft picks, all of it must be carved from pure air; all of it starts with the white blank page.

As a novelist, book reviewer, and expository writing tutor, I have seen just about every kind of writing difficulty, from orchid-purple prose to pure grammatical butchery.  I've seen it in fluttering amateurs and hardened professionals from New York to Beijing.  The one thing that consistently defies my skills as a writing teacher, though, is the dreaded “writer’s block.”

I have a theory about why:  I think it’s because it doesn’t exist.

“How do I get over writer’s block?”  I get this question a lot. It's hard to even know where to begin. For me, I think of writer's block as simply a luxury I can't afford—as a professional with deadlines, I could no more allow myself to have writer's block than I could take a cab to the airport and impulse-buy a ticket to Fiji. Sure, I have moments where I just can’t write, but that’s not a “block” in the classic sense.  That’s just me being obsessed with the Olympics. I think maybe a lot of people decide they have writer's block when what they really have is a bad case of "writing lame."

It happens to everyone, even—especially—professionals.  When you’ve got a case “writing lame,” everything you put to paper comes out limping, dragging one foot behind itself.  It’s not just that you’re not inspired, you’re barely even intelligible.  Soon you decide that you CAN'T write, you’ve forgotten how, your brain is sick, your liver hurts, something is wrong, and therefore you decide to sort of wait the "writing lame" period out. Of course this prolongs the whole miserable business to where suddenly writing becomes this huge dark hideous presence hovering over you like a high-pressure weather system bearing down on the Florida coastline.  And instead of calling this feeling “performance anxiety,” which is what it is, we call it “writer’s block.” The fact is, if you're limping around, you just have to do what any high school soccer coach will tell you to do: walk it off.

In other words, the only way to get past it is to write your way out. Imagine a wooden door in humid summer weather, so swollen it's become stuck in its jamb. The only thing to do is keep hurling your shoulder against that door. Sure, it'll hurt, but it's pretty much the only way of getting it open. And if, after a while, you're still pounding away at it, and it's still stuck, well, you might have been (just to wring the last drops from the metaphor) pushing on a "pull" door all along—which means you need to toss all the work you've done lately, and try a different strategy. I've done this a bunch of times, decided all the writing of the past week, or even month, was garbage, and cut the lot of it. 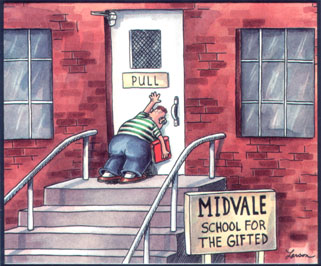 It happens to the best of us.

The point I want to make today is that it's important to know when you're writing lame, but it's more important to keep doing it. Back when I was tutoring in Cambridge, I used to use my dad's old typewriter; I would use it when I didn't know where the story was going, and I knew that everything I wrote was going to be wretched. That way, I could get all the thoughts out, but I also knew that since I would have to retype all of it anyhow, I didn't particularly care.  Because I knew that I was writing lame, I didn’t feel any need to write well—and that, for an author, is the purest liberty of all.  Writing badly in an attempt to get out of a slump is the literary equivalent of reading US Weekly in the dentist's office: it's the one time no one will judge you for it, and it's wonderful.

So in sum, I am not sure writer's block really exists (except, maybe, when the writer is so phobic and seized with performance anxiety that he genuinely can't come near the page). I think it's the term we use when it's just too hard to face down the enormously unpleasant task of writing. For me, I’d say that 9 days out of 10, writing fiction is pure misery. It’s hard! As Thomas Mann said, “a writer is someone for whom writing is harder than it is for other people.” But it’s hard for everyone else, too, because it is relentlessly creative, because no one else can tell you, in real time, whether your words choices or sentence structure or paragraph breaks are correct. There’s only you, beating your brains against the blankness.  Writing is a struggle.  It is work, and to do it well you must be as ruthless with your own language as Frank Underwood.  And anyone who tells you otherwise—who tells you that writing should be joyful, should be about inspiration and self-expression and raw emotional, is absolutely full of beans.