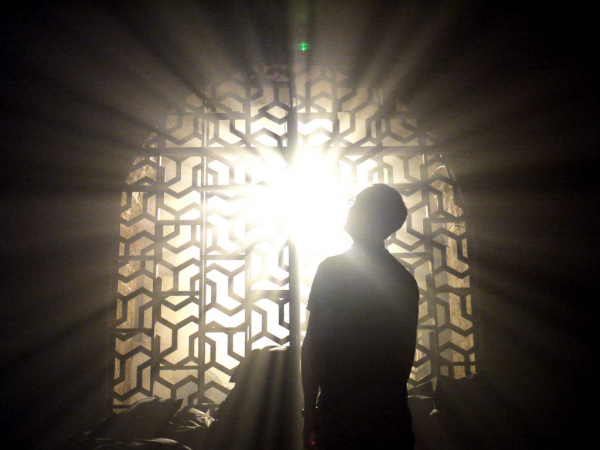 "Seeing the light" by Jenny Poole


Welcome back to our series on thinking by analogy! In this series, we are tracing how a simple idea – a mass oscillating back and forth on a spring – emerges again and again in many diverse fields of physics. As a physics tutor in Boston, I frequently see students not seeing the links between different parts of their physics education, links that are crucial for understanding the material or for preparing efficiently for the physics AP or GRE tests. We first saw how the oscillation concept first appears in your high school mechanics course, as a mass bobbing on a spring. Next, we saw how it might appear in the second half of your high school physics class, as a simple electronic circuit. Let’s pick back up from there.

Electrons sloshing around a circuit

In our last post, we discuss a simple circuit made up of a capacitor and an inductor. Inspired by the “mass on a spring” analogy, we chose to look at this picture in a particular way. The energy, loosely speaking, resides in the electrons that move through the circuit. Electrons accumulate on the plates of the capacitor, building up a voltage between the plates. This voltage gives the electrons potential energy, so they want to flow back off of the plates to restore equilibrium. The mass has compressed the spring to its limit, and is being pushed back.

Similarly, electrons flow through the coils of the inductor, creating a magnetic field. As the current of electrons begins to slow, the magnetic field induces a voltage across the inductor that tries to maintain the current. This self-induction essentially imbues the electrons with inertia, creating a kind of kinetic energy. The mass, having been pushed into motion, tries to remain in motion. Energy seamlessly flows back and forth between the capacitor and the inductor – between potential and kinetic energy – as the electrons oscillate in the circuit.

Turn this picture on its head!

Can we think about this circuit another way, though? One of the great pleasures in science, I’ve found, is that you can often look at the same physical system from a number of angles. The various descriptions of the system, though they might seem very different on the surface, are equivalent on a deeper mathematical level. As often happens when you approach a problem with a fresh perspective, adopting a different description of a physical system can lead to interesting new insights!

So far, the electrons have been the stars of our show. They carry the energy, and we only mention the electric and magnetic fields because they give the electrons a potential to push against or inertia to keep the current flowing.

Can we go further?

Again, the question you should always ask in science – so what? You told me to tilt my head and take another look at the circuit, and now I just see a crooked circuit. What new insights have we gained?

Let’s think about these questions: if we say that the fields are the repositories of energy and all the wires and charges are just a mechanism for transferring energy, then what’s so special about this mechanism? Could we find some other means of transferring energy back and forth between the electric and magnetic fields? We began with the capacitor-inductor circuit because it was easy to visualize, but can we choose something else that would work equally well?

As it turns out, we can. Instead of a circuit, with wires connecting two metal plates and a coil, picture…

Nothing. Just free space, with no electrons, no wires, no metal of any kind. Vacuum.

In your college electricity and magnetism course, the semester’s apex will probably be your arrival at Maxwell’s equations. These equations took the subjects of electricity and magnetism – born in studies of wires, coils, voltaic piles, and all kinds of mad scientist-esque equipment1 – and unified them under one theoretical framework.  Widely considered one of the most elegant set of equations in all of physics, Maxwell’s equations allow electric and magnetic fields to shuffle off their metal coils and exist as physical quantities in their own right.

Let there be light!

One of the most important consequences of Maxwell’s equations is that changing electric fields can create magnetic fields and vice versa – without any mediating charges. Without the aid of any wires or plates, we can set up an oscillator at any point in space2 simply by stipulating that an electric or magnetic field exists and that it is changing.

We can add two new types of energy to our growing lists: the energy stored in the electric field at any point in space


and the energy stored in the magnetic field

Here, ε0 and μ0 are called the permittivity and permeability of free space, but the important thing is that they are universal physical constants. Notice how the formal similarity still carries through from our first example of a mass oscillating on a spring. As with the two previous oscillators, energy seamlessly flows back and forth between the one type of energy and the other, between the electric and magnetic fields.

If you set an electric field oscillating at one point in space, electric and magnetic fields will propagate outward at this speed, sustaining each other as they travel. This number, which falls straight out of the mathematics of Maxwell’s equations, is the speed of light!

This result emphasizes the beautiful unification of Maxwell’s equations. All electromagnetic radiation – warm sunshine on your face, light bouncing off a lake, the laser in your DVD player, the x-rays that reveal your cavity to the dentist, the microwaves that heat your popcorn, all of it – is simply energy sloshing back and forth between electric and magnetic fields.

Next time – back into quantum land!

Now we’ve seen how carefully tracing an analogy through several different topics in physics can yield fascinating results. We started with a hunk of mass shaking on a spring, moved to electrons coursing through a simple circuit, then arrived at a beautiful picture of light as a simple electromagnetic oscillator.

Next time, let’s bring our mass on a spring into quantum land, a realm whose counter-intuitive features we have already explored. In our next post, we’ll see how electromagnetic oscillator plays by the rules of quantum mechanics. Stay tuned!

1 I’ve glibly omitted the brilliant contributions of several physicists – most noticeably Carl Friedrich Gauss, Michael Faraday, and André-Marie Ampère – but such is the price of condensing a semester’s worth of E+M to one sentence. It must also be noted that the composite picture of Tesla was taken several decades after the formulation of Maxwell’s equations, but it just fits the “Victorian mad scientist” archetype so well.

2 This is true, with modification, when we consider a point that happens to be inside some kind of object, but we’ll just assume that we choose a point in vacuum.