Chemistry uses a lot of esoteric notations, so here is a short series to act as a guide to the use of Greek letter in different contexts in organic chemistry.

Covalent molecular bonds are formed by the overlap of two atomic orbitals to form a molecular orbital. Remember that orbitals aren’t reality – they are a mathematical construct that represents probabilities of electrons at different points in space. In organic chemistry, it is most important to know the shapes of different s, p, and hybrid orbitals and to understand what orbital overlap means. This bonding guide assumes that you understand the basics of atomic orbitals and hybridization.

The reason that atomic orbitals will overlap to form molecular orbitals is because overlapping is more stable. By overlapping and forming a molecular orbital, electrons in the p-orbitals can be delocalized over a greater number of atoms. This delocalization is essentially giving the electrons more freedom to move around atoms, which helps stabilize any uneven charge distributions in the molecule because they are free to rearrange themselves in a more stable way. Confining electrons to just their atomic orbitals gives them less space to roam, and less stability for the molecule.

σ (lower case sigma) bonds are bonds produced by “head-on” overlap of molecular orbitals. This doesn’t have to be between two s, p, or sp-hybridized orbitals as you see in the below example. They can also rotate around the axis between the two atoms.

Top: three images show different possible head-on orbital overlaps with red arrows to point at the overlapping lobes, and a black rotation arrow around a dashed-line axis of rotation to show how a sigma bond can rotate. The sp-hybridized orbitals can be sp1, sp2, or sp3. The overlaps shown are not an exhaustive list.

Bottom: In a molecule with a sigma bond between two carbons, the two structures shown are equivalent because they can interconvert by sigma bond rotation.

π (lower case pi) bonds are bonds produced by the overlap of p-orbitals; π bonds resulting from d-orbital overlapping aren’t mentioned in organic chemistry courses. Since each p-orbital has two lobes, both lobes are part of the overlap. This prevents rotation around the axis between the two atoms because rotation would cause a loss of overlap which would be very unfavorable.

Top right: The two structures shown are not equivalent because there is no rotation around the pi bond along the internuclear axis (between atoms parallel to the dashed line).

Bottom: A progressive view of trying to twist around the internuclear axis (dashed line) that shows the two p-orbitals forming a pi bond on the left. The middle shows one atom being rotated, which reduces p-orbital overlap and weakens the pi bond – this is energetically unfavorable. The right shows two p-orbitals at right angles to each other with no lobe overlap – this is extremely energetically unfavorable because you lose all the stabilization of orbital overlap so it does not occur. 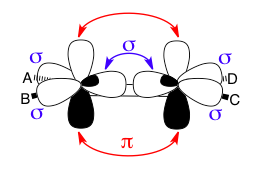 This image shows how sigma and pi bonds can coexist in the same molecule, even between the same atoms. The double bond between the two sp2-hybridized carbon atoms consists of one sigma bond (blue with arrows) using two sp2 lobes and one pi bond (red with arrows) using two p-orbitals. The other blue sigma symbols show that the remaining sp2 lobes are engaged in sigma-bonding with the A/B/C/D substituents.

This basic knowledge of sigma and pi bonding will help you understand bonding and reactivity for the rest of organic chemistry. 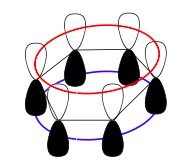 Learning substitution and elimination reactions for the first time can be really tough, and the new nomenclature certainly doesn’t make it any easier. You will hear things like “primary carbon” or “tertiary carbocation”, and understanding what this means is extremely important. Hopefully this guide will help you get past the numbering nomenclature so you can better tackle the meat of the problem.

A common use of a degree symbol is to denote the number of bonds to carbon that an atom has. The atom is usually a carbon, so 1° (primary), 2° (secondary), 3° (tertiary), and 4° (quaternary) correspond to 1, 2, 3, and 4 carbon-carbon bonds, respectively. Each additional carbon bond effectively takes the place of a bond to hydrogen. There can technically have a 0° carbon, but the only one that exists is methane (since it has four bonds to hydrogen) so nobody refers to it.

Notice how every additional carbon takes the place of the hydrogen, but don’t get these mixed up with substitution reactions. All the carbons in blue have their own three additional bonds (these are not shown for visual simplicity).

When this nomenclature is being applied to carbocations or radicals, you can have a 1°, 2°, or 3° carbon; I’ll refer to the reference carbon which is the carbon whose bonds we are counting. There cannot be a 4° carbocation/radical because one orbital needs to be empty (carbocation) or contain one electron (radical), so there are no orbitals left to engage in forming a new bond.

As the number of carbon-carbon bonds increases, the area around the reference carbon becomes much more crowded because a carbon atom is so much larger than a hydrogen atom, and each additional carbon being added could also have its own bonds to other bulky substituents. In addition, the stability of the molecule increases with the number of carbon bonds because each additional carbon can allow the reference carbon to “borrow” or “share” a little bit of its electron density (positive inductive effect), allowing the reference carbon to stabilize its positive charge using a little bit of negative electron density and effectively spreading out the positive charge. These steric (spatial) and electronic (charge delocalization) effects contribute substantially to reactivity at carbon atoms. If a 1° or 2° carbocation doesn’t have enough stabilization through carbon-carbon bonds, it can even rearrange its entire carbon skeleton!

CH3+ won’t exist in any normal conditions that you will encounter in an organic chemistry class. Also note that the last option has too many orbitals in its valence if it has four bonds and is positively charged, so it doesn’t make sense. Radicals work very similarly, although stabilization effects are less dramatic.

With alkyl halides and alcohols, there cannot be a 4° carbon because the OH or X only allows space for three other bonds to occupy the octet. When people refer to a 2° alcohol or a 3° alkyl halide, they are counting the number of carbon bonds to the reference carbon – the same carbon that is bonded to the OH or X.

This nomenclature also applies to nitrogen as the reference atoms, counting the number of carbon-nitrogen bonds in amines and amides.

Top: Amine substitutions increase until there is a positively charged quaternary amine. The only thing that is different from carbon nomenclature is a different reference atom.

Bottom: Note that the carbon of the carbonyl in the amide counts for carbon bond counting purposes.

This basic nomenclature will serve you will throughout organic chemistry. 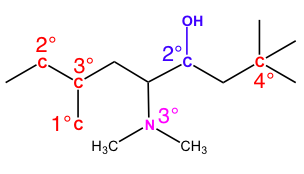 After this guide, you should understand why each reference atom is labeled as such. There are still unlabeled carbons left on this image, so try testing yourself and seeing if you understand the relative stability of each carbon.

The Greek alphabet can also be used to describe the relative position between two atoms. If you pick an atom, usually a carbon, to be the reference atom, letters are used to tell you how far away another atom is along the molecular skeleton. If two carbons are next to each other, they are alpha to each other. If a carbon and a nitrogen are separated by one atom, they are beta to each other. You can continue to go down the alphabet, but organic chemistry rarely addresses the relationship between more distant atoms.

Left: Each colored pair of alphas labels carbons that are alpha to each other.

Right: Each colored pair of betas labels carbons that are beta to each other.

These relationships matter because the closer two atoms are to each other, the more influence they can exert on each other. This comes up most often in enol/enolate chemistry because a carbonyl group is electron-withdrawing which deprives adjacent carbons of electron density. As a result, any hydrogens on the alpha carbon become more acidic and can be plucked off as a proton in keto-enol tautomerism. The alpha/beta system of carbon counting is also used extensively in discussing 1,2 and 1,4 additions.

Stumped? Need help tucking in all the information?

Biology Tutor: Breaking Down Cellular Respiration and the Krebs Cycle