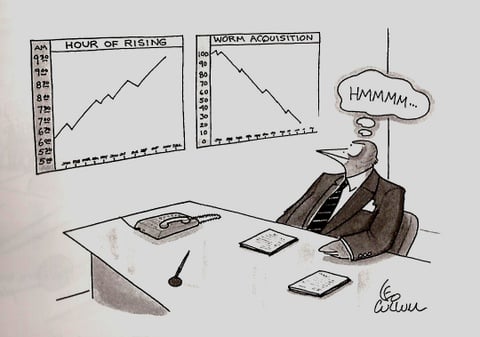 If only the questions were this obvious...

The short answer?  Yes and No.  It depends on what types of school you’d like to be admitted to, how much time you have to study for the exam, and what you want to do after business school.  That said, the GMAT Integratd Reasoning section is definitely not as important as the Quantitative and Verbal sections of the exam.

A bit of background

During the summer of 2012, the Graduate Management Admission Council (GMAC) replaced one of the essay-style questions on the GMAT exam with a new section called Integrated Reasoning (IR).  Unlike the Quantitative and Verbal sections, this section is not adaptive and allows you an on-screen calculator.  Question types span graphics interpretation, two-part analysis, table analysis, and multi-source reasoning.  Sometimes, answers are multiple-choice, other times they appear in a drop down.

The questions ask test takers to make sense of an overload of information, discarding irrelevant data to answer the questions.  Sometimes the data can be found on multiple pages, other times in wordy paragraphs and busy spreadsheets.  As you can imagine, these are valuable real-world business skills and likely a predictor of success in school and beyond, which is, after all, what admissions staff at various universities count on the GMAT to provide.

All about statistics and scoring

The IR section has twelve questions and is thirty minutes long.  This may seem like you have ample time to get through the section, but pacing, as with the rest of the exam, will be key.  Many of the questions will have multiple parts and there is no partial credit.  The section is scored out of eight points in single digit increments.

As of July 1, 2015, according to the GMAC, the average score is 4.32 with a standard deviation of 2.14.  So, if you score a six or above on the IR section, and scored well on the rest of the exam, you are in good shape for the top-tier schools!

Should I care about the IR section?

Probably not. For the most part, admissions committees aren’t looking at IR scores.  There are a few reasons for this, but the main one is that the section has only been around for three years.  Since GMAT scores are good for five years, including the IR score does not provide a level playing field for applicants.

Does that mean you should start to worry after 2017?  Likely not for another few years.  As we mentioned earlier, the GMAT is valuable to admissions committees because they use it to predict if a student can be successful both in the program and beyond.

For the IR section to be used to evaluate applicants, schools would need to start collecting the scores and correlating them to a student’s success for a number of years.  Some schools have said outright that they aren’t using the IR section (INSEAD is one) and others say that it won’t be that important (think Stanford).

In short, the IR section has the potential to be very useful in the future, but for the next few years, it isn’t likely to factor too much into the admissions process.

Reasons to care about the IR Section

Although you likely won’t spend too much time studying for the IR section, it is important that you do not ignore it entirely, even if you are short on study time.  A 780 GMAT score paired with a two on the IR section will not do you any favors.  Schools will still glance at your IR score, if just to reaffirm what they already know about you:  you’re a great candidate!

Also, if you have an interest in a top-tier school, followed by a consulting career, an IR score may play a more important role.  Bain & Co is one example of a company that may begin asking for students to report the IR score in addition to the Quantitative and Verbal scores they are currently required to provide.

How do I decide whether studying for the IR section is worth it?

To help you decide if the IR section is worth your time, Cambridge Coaching has created the guide below.

For more personalized guidance, reach out to your Cambridge Coaching tutor.  We’re always glad to help!

Check out these other blog posts written by our business school admissions consultants in Boston and New York: Does success on the GMAT predict success in MBA classes, MBA programs: You Got In! Now What?, and An MBA is Only as Good as Your Plans For It.