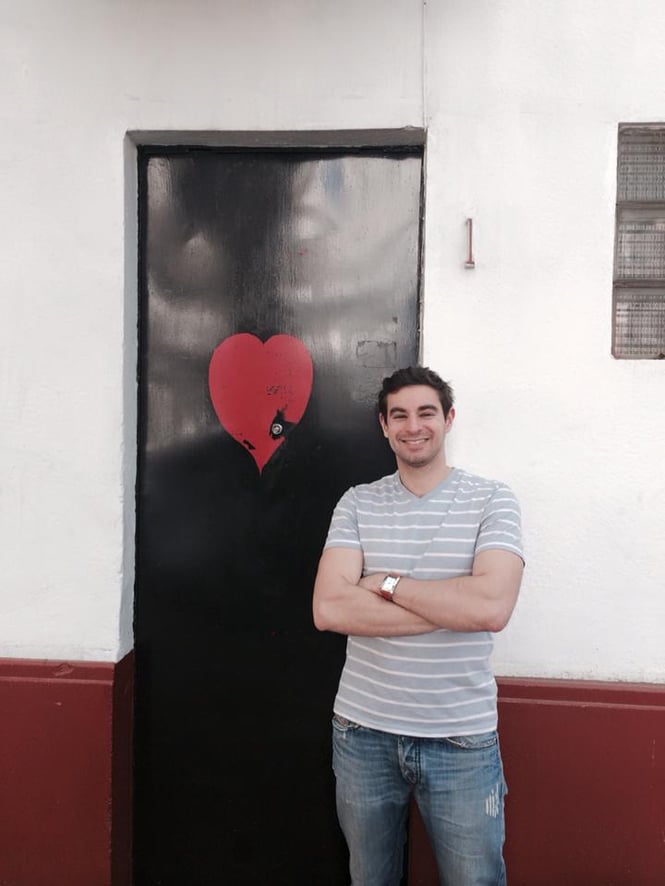 This week we're spotlighting Manoah, a member of our French tutor team! Manoah graduated from the University of Chicago with honors in both English and French language and literature, and attended NYU's doctoral program in French literature. He is currently an adjunet instructor at New York University, and specializes in SAT and SAT-II prep, as well as French Literature and Political Philosophy. Interested in working with Manoah? Check out Manoah's tutor page here!

Where are you from?

I was born just outside San Francisco, although I am definitely not a Californian in terms of demeanor. My high-strung New York parents moved back to the East Coast when I was 3, so I grew up mostly in New Jersey, which explains my neuroses and strange pronunciation of words like “mall.”

Where did you go to college and/or grad school, and what did you study?

I studied English and French literature at the University of Chicago, where I helped disprove the reputation that U of C is “where fun comes to die.” After a few years in the private sector, I went back to school for my PhD in French Literature at New York University, where I’m now working on my dissertation. My specialty is 19th century realist fiction, and my thesis examines relationships between physical objects and human beings in the novels of Honoré de Balzac.

What do you do now?

I spend my days working on my dissertation, tutoring with Cambridge Coaching, volunteering, and cooking yummy meals at home in Brooklyn.

What’s your favorite subject to teach, and why?

I may be completely alone in this, but I absolutely love teaching grammar in both French and English. I think that most people have panic attacks about gerunds, antecedents, and indirect object pronouns, but these things are our friends and we should learn to appreciate them. A language is only as good as its building blocks, but fortunately, most languages are incredibly well-constructed. We have grammar to thank for that. Grammar gives us a way of understanding how languages emerge from logical structures, and grammar can provide a window into the culture and philosophy of a nation or people. I enjoy showing students how a seemingly boring technical point in grammar can connect to much larger ideas.

If you were to recommend a book to the CC community, what would it be?

I believe that everyone should try and read at least one book a year that knocks the wind out of you and rearranges your habitual ways of thinking. This year, the book that did that for me was Ta-Nehisi Coates’s brutal yet lyrical reflection on being a black man in contemporary America, Between the World and Me.

What’s a lesson you’ve learned from tutoring? (Could be about teaching, people, life, whatever!)

One of the best things I’ve learned in my years of tutoring is that even the smallest bits of progress can be game-changing for students. When I’m working with someone on overcoming a plateau in terms of test numbers and performance, breaking through – even by a few points – can be electrifying: we’re proving that growth is still possible, that results aren’t set in stone. I feel similarly elated when I’m working on admissions essays and we hit that draft where we’ve finally wrangled the word count down to the limit. Students who doubted that they could tell a good story in a thousand words feel incredible when they see what they achieve in just 650. Word by word, draft by draft, question by question, I get to watch students gaining confidence in their abilities and in themselves.

We’re compiling a list of “amazing feats” throughout history– basically, the intellectual equivalent of climbing Mount Everest. Can you share one of your favorite feats from your field?

Many of the most daring feats in French literature were accomplished by Honoré de Balzac, the incredibly prolific novelist, journalist, playwright and social critic of 19th century Paris. Balzac came from modest beginnings and was an indifferent student; he seemed on a trajectory towards obscurity, living in a tiny garret apartment in Paris and running a printing house that went belly-up in the late 1820s. Then, he refashioned himself as a popular novelist and started churning out text after text to wild acclaim. Balzac completely reinvented the French novel, filling his dense stories with material gleaned from history, philosophy, theology, economic principles, scientific research, and the art, theater, and music of his day. He became a proto-sociologist but he was also something of a mystic. Fueled by coffee – he drank upwards of 30 cups a day – Balzac wrote for twenty years straight before collapsing and dying very dramatically in Paris. His legacy? The Human Comedy, a cycle of narratives that includes over 100 novels and short stories and several semi-philosophical treatises, populated by 2400 characters, many of whom reappear from story to story. Balzac was larger than life, and he built an entire cosmos as an author.

Diderot, Freud, and Maimonides. Diderot was one of the most important French philosophers of the 18th century, and one of the chief proponents of materialism, arguing against the idea of an eternal soul. Maimonides was one of the world’s most important commentators on the Torah. Freud is, of course, Freud. I’d love to get them around the table and start talking religion.

Tell us your favorite epic (or not so epic) story from your childhood.

My best friend and I were obsessed with time and space travel, so we came up with an incredibly complicated role-playing game in which we were brothers who were also famous scientists who explored the universe with machines we invented. Every time we hung out, we worked on our time machine and space ship, and then after weeks of careful planning, we’d stage missions around the neighborhood, turning other people’s yards and our own houses into hostile, alien planets or our own world in different time periods. A lot of the time there were “explosions,” we’d jump into a pile of leaves, wreck all our equipment, openly lament the end of the mission, and then go back inside to have a snack and start rebuilding everything.

Introduce us to your 15 year old self.

15 year old me was a creature of the millennium with New Jersey as a natural habitat. Lots of hair gel and tight Armani Exchange t-shirts from the mall. I looked like a B-list Backstreet Boy.

I’m convinced that Moby Dick was specifically constructed to be read on a desert island. That novel is infinitely satisfying, and it contains worlds upon worlds.

What are 3 alternative career/life paths you have considered (even just for fun?)

In the past, I’ve wanted to be a lawyer, a rabbi, and a psychiatrist. And I dream of quitting everything and just being a famous writer living a fabulous lifestyle. Somewhere between writer, rabbi, and psychiatrist, you’ll find my current role at Cambridge Coaching!

Tell us about the last amazing meal you had.

Earlier this year in Mexico City, my wife and I did a ten course tasting menu at a restaurant called Pujol. One plate had one-day-old molé in a concentric circle with one-year-old molé on the outside; another featured stone fruit infused with mezcal. Another plate was garnished with actual gold dust. The craziest thing of all was an ear of corn served inside a blisteringly hot hollowed-out gourd filled with roasted herbs; we dipped the corn into a spicy aioli flavored with pulverized ants. It was mind-blowing.

What are 3 places you'd like to visit in the next 5 years?

It’s hard to name just one – there’s so much I still want to learn! But largely, I’d say piano. I studied classical piano for several years, but switched to voice in high school. I still sing today, and that gives me great joy. But I wish I was more technically accomplished as a pianist and better trained as a musician. I would love to get to a place where I can just grab music off the shelf and work through tricky pieces on my own. Or improvise on jazz piano. I really should have studied my scales better!

When I was in middle school, I had a recurring bit on one of New York’s most popular radio morning shows. I was the know-it-all Bar Mitzvah kid. The hosts would talk about Jewish holidays and get all the facts wrong, and then I’d call in and crankily set them straight in my high-pitched prepubescent voice.

If you could be reincarnated as any living thing– what would you choose for your next 3 lives?

My wife’s parents have a labradoodle named Darcy and she’s living the best possible life. Walks on the beach, lots of naps in the sun, tons of tummy-rubbing. I’d be thrilled to come back as a labradoodle. That or a cheetah – cheetahs are awesome.

Check out these articles by Manoah!

The French Tutor: Tips and Tricks for the French SAT Subject Test

College Admissions Guide: Scoring a Knockout in the Interview