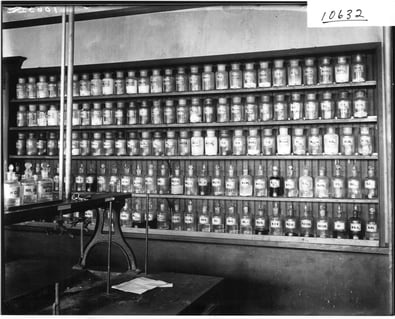 Whether you’re trying to accomplish a substitution or elimination in your synthetic scheme, there’s no getting around that a good leaving group must be involved. You’ll have a host of ways to introduce leaving groups by your final exam. Some reagents will invert chiral centers (e.g. SOCl2/pyridine, PBr3) in the process, and others won’t.

But what about location? Where do we want to put the leaving group? Controlling the placement of leaving groups is essential through Orgo 2, so it’s important to recognize that bromine-related reagents are the key to specific leaving group placement.

The following triad should sit in the most important drawer of your mental stockroom.

NBS is short for N-Bromosuccinimide. Its weak N–Br bond can undergo homolytic cleavage following photo- or thermoinitiation. The resultant radical mechanism allows allylic and benzylic bromine placement. Check it out:

Moral of the story?

NBS is the most powerful of the triad due to its high specificity: we know exactly where bromine will go, and all extraneous functional groups will be left untouched.

Hydrohalogenation is likely one of the first mechanisms you learned. It occurs through a carbocation-based mechanism, so don’t forget to watch out for rearrangements.

Also, don’t forget HBr is a strong acid first. If you have an amine attached to your molecule of interest, the amine will grab HBr’s proton instead of the much less basic pi-bond, and you won’t get the bromine placement you wanted.

If the coast is clear, use HBr on alkenes for Markovnikov bromine placement.

We can also hydrohalogenate alkenes in the presence of peroxides following photo- or thermoinitiation. In particular, the peroxide’s weak RO–OR bond undergoes homolytic cleavage, and the rest of the mech is radical-based. Anti-Markovnikov bromine placement is the result.

Since this mechanism is radical-based, don’t forget rearrangements are technically possible. However, I will say I’ve never seen a professor throw this caveat into a synthesis problem. Just be aware.

A Note on Stereochemistry

Consider the mechanism of each triad member.

3: HBr with peroxides and hv/heat (radical-based)

Since radical and carbocation-based mechanisms involve some planar sp2 species, we expect an equal probability of syn and anti addition. In other words, don’t forget to account for a potential new chiral center after using the triad!

The triad is key to specific alkyl bromide placement. Since Orgo 1’s only path toward carbon-carbon bond formation requires an alkyl halide, keep bromine in mind when you have to snap together two carbon chains, and also keep in mind you may be left with a new chiral center.

Are you intersted in reading more on organic chemistry? Tune in to more from Andrew soon!  In the meantime, you can look back on some of his previous work here:

Feeling stumped in your organic chemistry course?  We have chemistry tutors and MDs  in New York, Cambridge, and online available now!