Have you ever wondered where the formulas for volumes that you studied way back in geometry come from? It’s not too surprising that the volume of a cube is

, but why is the volume of a cone

Here are a couple of examples: 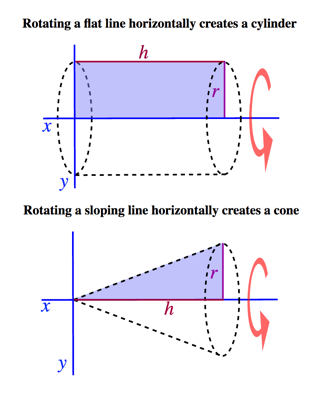 Solids that are created this way are known as solids of revolution.

The general formula for the volume of a solid of revolution around the x-axis is the following:

Let’s do a simple example: let’s take the graph y=3 . x of from x=0 to x=2 (shown below) and rotate it around the x-axis. As you can work out in your head or on a piece of paper, this will create cone of height 2 and radius 6. 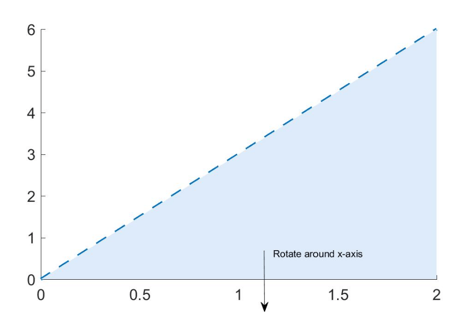 By using the formula above, we see that the volume is:

We can double check that this is what we would get by using the standard formula for the volume of a cone:

Rotating Around the Y-Axis

You might also see a variation of this problem in which the solid is generated by revolving a line or curve around the y-axis instead of the x-axis.

In this case, the formula changes slightly:

Now, the integral is with respect to the function y in and the bounds a and b refer to the minimum and maximum values of y.

Let’s consider the example of the same line as in the previous part, but now rotated around the y-axis: 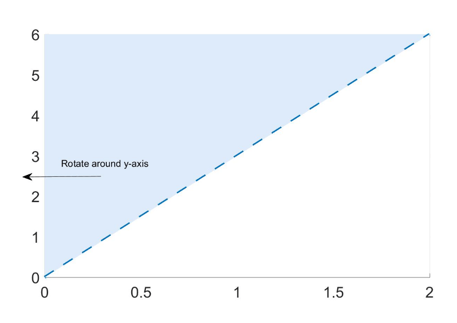 To use the formula above, we must first rewrite the equation for the curve in terms of y:

Again, you can check that this is the same volume that you would get if you used the volume-of-a-cone formula.

There’s one more twist that you might see when you solve these kinds of problems, and those are solids that are rotating the area between two curves.

Here’s an example of that. We are rotating the area between the curves

around the x-axis. Can you visualize the resulting volume? It’s an irregular 3D shape that looks like a dome with a cone taken out of it. 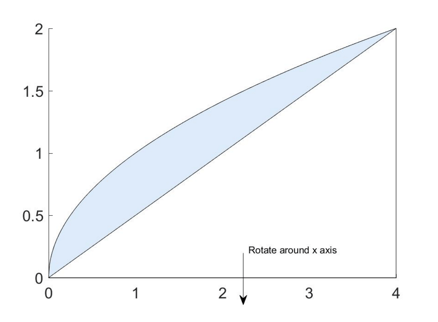 We’ve covered a powerful application of integrals, finding the volume of solids of revolutions. This is a really useful and simple technique – not only can we use it to derive formulas for the volumes of simple shapes like cones and cylinders, but we can use it to find the volume of all sorts of irregular 3D shapes that we don’t have simple formulas for!

You could find the volume of the bell of this trumpet using the techniques we discussed in this post!

Abu is one of our incredible mathematics tutors in Cambridge.  If you're interested in working with him in Cambridge or online, you should contact us today!

Are you looking for more content on mathematics?  Check out some of our previous blog posts below!