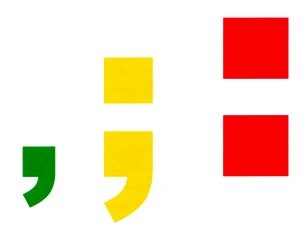 One advisory that students hear a lot, especially in earlier years of English class, is "avoid a comma splice." A comma splice is an excessive use of commas without the proper elements of a complete sentence to justify the commas. When to use a comma versus a semi-colon depends on the type of sentence you have. Below are the sentence types that call for commas.

Although she likes using commas, she prefers using semi-colons.

Although she likes using commas, she prefers using semi-colons, but she hates using colons.

You'll notice that there is also a coordinating conjunction (but) to connect link the two independent clauses. This is necessary after the comma to avoid a comma splice. Below are scenarios in which a comma is incorrect.

She likes commas, but prefers semi-colons.

This is a very frequent mistake to make but it is a mistake to put a comma in this sentence. The reason is that an independent clause must follow a comma, and but prefers semi-colons is not an independent clause because it lacks a subject for the verb. Even though the subject is understood to be the "she" from the beginning of the sentence. To correct this, add the subject again or remove the comma.

She likes commas, she prefers semi-colons.

This is not grammatically correct. Separating two independent clauses with only a comma does not make a complete sentence. To make this correct, either add a coordinating conjunction after the comma or add a semi-colon.

She likes commas; she prefers semi-colons.

And there you have the semi-colon in all its correctly-used glory. A semi-colon's purpose is to connect what would otherwise be two separate, complete sentences because they are related in some way that justifies linking them together instead of making them two separate sentences. You cannot use a semi-colon with a coordinating conjunction, however; if there is a conjunction, then it must follow a comma because an independent clause cannot start with a conjunction.

When, however, can I use this word?

As the previous sentence indicates, when however is at the end of a clause, a semi-colon and not a comma must come directly after it. There is some debate about whether it is grammatically acceptable to use however to start a sentence when it is being used to mean nevertheless. The logic here is that however is serving as a conjunction would, and it has historically been frowned upon to begin a sentence with a conjunction.

*The above rule does not apply to instances in which however is being used to mean in whatever way, such as However you want to write this sentence, you should feel free to do so. In this case, however cannot be replaced by a conjunction.

Commas after nouns, verbs, or adjectives in a list

It is known as the Oxford comma. Its name derives from The Oxford University Press, according to this article on oxforddictionaries.com. That is, the comma that separates items in a list. The question that always gets asked is whether to put a comma before the last item or not, and the answer is that it really depends on who's asking. The most important thing is to be consistent within whatever work or publication you are writing. For example, newspapers have set standards for categories such as writing lists in order to avoid any inconsistency in style. Some may use the Oxford comma always, and some may use it never.

The Oxford comma, or serial comma (because of its use in separating items in a series), looks like this:

The newspaper has different rules for commas, semi-colons, and colons. The last comma is the Oxford comma. That sentence could just as easily read:

The newspaper has different rules for commas, semi-colons and colons. In a New York Times FAQ on style, Philip Corbett writes that the Times does not use employ this final comma unless necessary to avoid ambiguity or cumbersome wording.

If, however, the items in a list are themselves several-word phrases, then it is best to use an Oxford comma to ensure that the reader knows where one item ends and the next begins. For example:

Without the final comma, we might be unclear about what that last combination includes. Is it chocolate with chocolate and vanilla? And then also vanilla by itself? To avoid ordering the wrong flavor of cupcake, use the comma.

It's last but not least: the colon

The colon is a punctuation mark that has few but important places in sentence structures. Use a colon after an independent clause in order to introduce a list or qualifying description that cannot stand alone.

The writer liked to post abut the topic she loved most: grammar.

She would write about her three favorite punctuation marks: the comma, the semi-colon, and the colon.

When the preceding clause cannot stand alone, you cannot use a colon.

This is an incorrect sentence:

The girl was writing with: a pencil, a pen, and a marker.

This is the correct sentence:

The girl was writing with a pencil, a pen, and a marker.

Don't miss out on next month's installment of our grammar blog!  Want more tips from our grammar expert on staff?

Continue to read up on writing by checking out some excellent articles below by our New York and Cambridge English tutors!

5 Habits for Improving (and Maintaining) Reading and Writing Skills