Step by Step Instructions on How to Solve LSAT Grouping Games 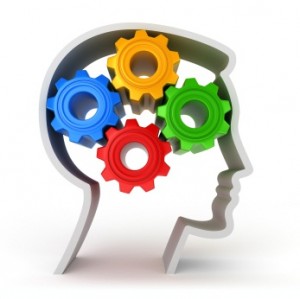 LSAT grouping games, where we’re given a set of variables and asked to sort them into different groups, can be some of the toughest questions on the LSAT’s Analytical Reasoning section. The Recycling Centers game from the June 2007 test (Section 1, Qs 18-23) is no exception.

In this post, I’m going to use that question to show you how to diagram and tackle grouping games. You can find the full June 2007 test, including the Recycling Centers game, on LSAC’s website at this link.

One thing to identify from the start is whether variables can repeat in the game or not – that is, whether one variable can be placed in multiple groups. It makes life easier when they can only go in one group, but no such luck here. Boo.

I like to set up grouping games in rows, with our three groups becoming the three rows. I draw places for the minimum number of variables in each group as solid lines, and draw up to the maximum in dotted lines. In this case, there’s a defined maximum (3), so that’s pretty straightforward. I list the variables up top so I know what I’m messing with.

Helpfully, the LSAT almost always gives variables that have different first letters – in this case, we have Glass, Newsprint, Plastic, Tin, and Wood. Forget about the full names of the variables and just use the first letters from here on out.

So, here’s our basic diagram: 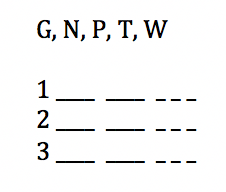 Next up, let’s draw our rules. The goal is to indicate them in the minimum amount of detail that still lets us look at our drawing and know what they mean immediately, without having to think about them.

So, the full diagram:

We’re on our way.

It’s worth it now, before we ever look at the questions, to stop and see what additional rules we can interpolate from the ones we have. The only one I see is that P can’t be in group 2 – if it were, it would also have to be in group 1, but that’s impossible because we know there can only be one P. I’d add a P with a line through it to the left of my group 2 row so that I know P can’t go in there.

It’s also worthwhile to take a moment to commit one rule to memory. In the harder games, there’s often at least one rule that’s unusual and doesn’t have a simple representation we’re familiar with – in this case, it’s the rule that says that everything in group 2 has to go in group 1. The weird rules are good choices when you’re deciding what to memorize at the start of the game, because they’re the easiest ones to forget once you’re in the thick of the questions.

Don’t worry if it takes some time to set up the right diagram, draw the rules, and memorize one. I aim for two-minute time limits to set up each game, which is a big chunk of the work if you’re only taking 6 or 7 minutes for a game! It’ll pay out dividends though – having the right diagram at the beginning will save you a lot of time when you’re working through the questions.

On the LSAT Analytical Reasoning section, you’ll have 35 minutes to do four games. But not all games are created equal – there are usually a few relatively easy games and at least one hard game. So instead of spending 8:45 per game, you’ll aim to spend about 6 minutes on the easy games to give yourself a leisurely 10+ minute pace for the tough ones. When you’re spending 10 minutes on a game, taking a couple to make sure you’ve got the right diagram isn’t too big an expense.

In my next post, I’ll take you through the questions for this game. But that’s the easy part! Once we’ve got a good diagram and we know the rules, the answers often fall into place.

Are you interested in connecting with one of our New York or Cambridge LSAT tutors to learn how you can solve problems like this?

Craving more tips and trick on how to best approach your LSAT studying?  Read the following:

4 Key Tips on How to Study for the LSAT

A Brief Introduction to the LSAT: Logical Reasoning!

LSAT Tutor: The Best LSAT Resources, and How to Use Them