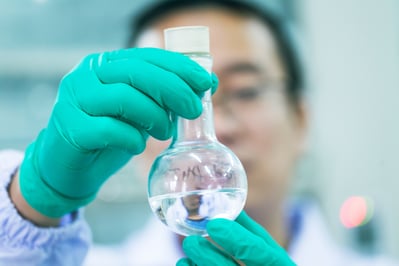 When I was learning organic chemistry, I remember the reagents for oxidation reactions completely driving me bonkers!

KMnO4, K2Cr2O7, PCC, CrO3, Swern, Dess-Martin? And so the list goes on. Hold on. Where did these reagents come from? How do they work? Why chromium? What’s the mechanism? These are all good questions. All will be revealed in this post.

When I was taking organic chemistry as an undergrad, the details of these reactions were completely overlooked. “Don’t worry about the mechanism! No time to go through this! “the professor said. I was left with a frustrating sense that there was something deeply mysterious about alcohol oxidation.

Only later did I learn that it’s not mysterious at all. In fact, the key mechanism is very familiar.

Let me illustrate to you what I mean.

Below is a reaction we’ve seen before. Elimination of alkyl halides to give alkenes through an E2 mechanism. The base removes hydrogen, the C-H bond is broken, a C-C (π bond) is formed and the C-LG bond is broken. The result is an alkene.

Now imagine a slightly different E2 reaction, except one where the good leaving group is on oxygen. We’ll call it “LG” for now.

See how the C-H bond is broken, the C-O (π bond) is formed, and the O-LG is broken. Since we’ve formed a new C-O π bond in the process at the expense of a C-H bond, an oxidation has occurred.

Believe it or not, most oxidation reactions of alcohols proceed exactly this way!

If only I had understood this when I was learning organic chemistry - it would have made alcohol oxidation seem a lot less mysterious.

Can it really be that simple? Why are there so many different types of oxidizing agents? And why do the mechanisms (like the Jones oxidation here for example) seem so complicated?

Yes, there are a lot of steps in a typical oxidation reaction. However, most of these steps consist of:

– activating the oxidant (such as in the Swern oxidation, where oxalyl chloride converts DMSO to an electrophilic sulfur species, or in chromate oxidations, where strong acid converts chromate (such as K2Cr2O7) to the active oxidant [H2CrO4].

– coordination of the alcohol to the oxidant, followed by proton transfer(s) (seen in the mechanisms of most chromium oxidants, and Dess-Martin periodinane).

These steps are important, of course, but only in an auxiliary role. If you’ll pardon the analogy, they’re just foreplay that precedes the main event.

The result of these beginning steps is simply to install a good leaving group on oxygen. That “good leaving group” can take many forms. It’s illustrated below with each oxidant, in green. There are, of course, many, many more oxidizing agents for alcohols than those depicted, but almost all of them essentially work the same way. 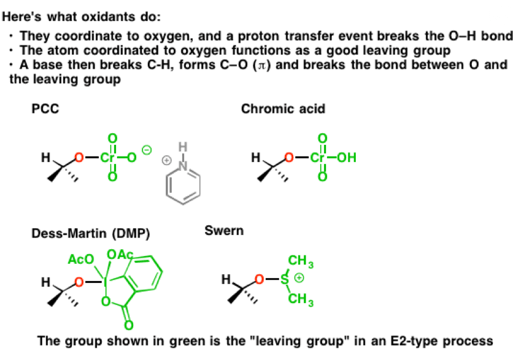 Reacting each of these substrates with base then results in breakage of the C-H bond, formation of the C-O (π bond) and breakage of the O-LG bond as was discussed earlier. Each of these “leaving groups” accepts the pair of electrons from the bond to oxygen, reducing its oxidation state by 2 in the process (remember – the oxidant is reduced, and the substrate is oxidized).

So, there you have it! I hope this helps you as much as it did me back in the day!

Want to work with Daljit on organic chemistry?

Are you interested in connecting with an organic chemistry tutor this semester?