The Five Key Difference Between American and British Spelling Conventions 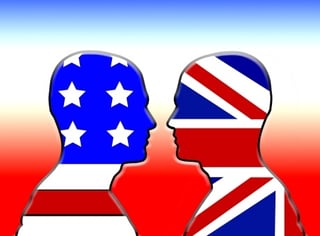 Before America became a nation, the colonists who arrived to establish the country spoke English. From England. As there was not yet an authoritative source for how to spell words correctly in English, the colonists spoke the English they were used to back home and wrote much the same way, using the way language was written in English literature as a guide, according to this brief mental floss video. The first official written authority on the English language was Samuel Johnson's A Dictionary of the English Language, published in 1755, which served as the trusted reference for English language use in the United States until Noah Webster invented one of his own. Webster reasoned that a new country should have a new language, and thus the first American dictionary was born. Webster's A Compendious Dictionary of the English Language was published in 1806 partly to solidify America's cultural as well as linguistic independence from Britain.

Since then, differences between American and British have become part of our standards for writing, editing styles, curriculum, and spell-checking systems. European schools in which English is taught as a foreign language teach British English, whereas American English remains the accepted English language across the United States and Canada.

The following are some key differences between American and British English:

Words that end in -ize in American English have an "s" instead of a "z" in the British spelling. Examples include: organize/organise, colonize/colonise, advertize/advertise,

Whereas American spelling includes many words that end in-or, the British add a "u" to their words with otherwise similar endings.

In British English, verbs that end in -el take on an extra "l" in the gerund and past tense form, such as travel, travelling, travelled. In American English, the single "l" remains throughout the different verb forms: travel, traveling, traveled.

American English words that end in -nse are spelled with an "c" in place of a "s" in British English.

American English words that end in -er reverse the order of these last two letters in British English.

In addition, there are certain expressions that change grammatically depending on whether the surrounding conventions are British or American. For example, Brits say "on holiday" instead of "on vacation" as we say in the States. "What are you doing at the weekend?" one might overhear in the streets of London, as opposed to "on the weekend" in the U.S. Certain verb constructions also differ; in British English, the past tense "got" is used both as a possessive and to express an action completed in the past. In British English, one might ask, "Have you got any brothers or sisters?" instead of "Do you have any brothers or sisters?" as Americans would say. And in the past, whereas got is the sufficient past participle in British English, the correct form in American English is gotten: "They haven't got very far" vs. "They haven't gotten very far".

Are you interested in connecting with one of our New York or Cambridge English tutors?

Craving more from our grammar expert?  Read some of Alison's previous blog posts below:

What is the Difference Between Then and Than? Allusion and Illusion? To, too, and two? A List of Common Homophones and their Differences