How to approach overlapping set problems on the GMAT

Overlapping sets are, by far, one of the most complicated topics on the GMAT. Any good GMAT coaching regimen should focus on demystifying this topic. But if you put in a little bit of elbow grease and apply a formulaic approach, these seemingly overwhelming questions can score you big points. As a private GMAT tutor in Boston, I’ve worked with students and developed some effective strategies that I’ll share in this post.

There are two types of overlapping sets.

Tackling the single-trait question is easy with a Venn Diagram. Consider the following question:


There are 100 students in a high-school class, of which 50 study French, 30 study Spanish, 40 study Latin, and 10 do not study a foreign language. No student takes all three languages. How many students in the class take exactly two languages?

With lots of numbers here, the crucial step is organizing information into a Venn Diagram. 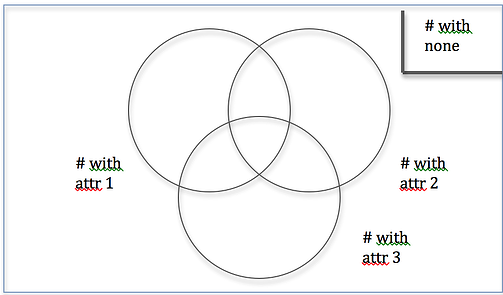 The diagram above presents a standard framework for single-trait overlapping sets. Begin by filling in all of the information that you know, and then assign variables to the information you do not know, and solve. For the language example, we have the following:

So now that everything is filled in, we can start to solve. Given that there are 100 students in the class and 10 do not take a language, we have 90 students who do. However, if we add 50 + 30 + 40, we get 120 students. This is because we are double counting regions a, b, and c on the diagram. Therefore, we would have to subtract out a + b + c, which must be equal to 30 students. This means that 30 students take two languages.

However, no need to memorize any algebra; instead, just draw the diagram and think through it logically.

Approaching the double-trait question is a little different. Here, each individual has two attributes, and the objective is often to find out what percentage of individuals with one attribute also possess the other. This is handled very nicely with a table. Consider this example:

Again, lots of numbers here, so let’s start a table with the information we know:

Now that we have established this, the last step is to fill in the remaining three squares by subtracting from totals:

The answer is 1,800. Do you see how making a table allows you to organize information, and systematically determine the answer to a question? From my experience as a private GMAT tutor in Boston, I’ll reemphasize that this is one of the most crucial skill for students to develop.

Remember that systematic thinking is key to solving these problems. Overlapping set questions are very common but present a complex set of difficulties. Like many questions on the GMAT, the most important part of solving the question is to fully understand and rephrase it. To reiterate the key steps:

As long as you keep this systematic approach in mind and avoid common pitfalls (e.g. confusing totals with individual pieces of data, mixing up single- and double-decision variables), you should be able to effectively demystify questions of this type. Here are some additional blog posts written by fellow private GMAT tutors that you may find useful: on back solving, changing your approach, and the process of elimination. If you’d like additional support, we’re happy to offer in-person GMAT coaching in Boston and New York, and online GMAT coaching anywhere around the world. Feel free to get in touch!

May 28, 2021 Advice for international students pursuing an MBA in the US
May 21, 2021 How to determine the optimal price of a product as a monopolist
May 3, 2021 So what’s the deal with the virtual GMAT?
August 21, 2020 Bloom’s Taxonomy
June 10, 2020 GMAT Critical Reasoning questions: know your conclusion
June 5, 2020 The power of prime factorization for the GMAT quantitative section
May 27, 2020 How to tackle GMAT Sentence Correction questions
May 25, 2020 Work/Rate/Time problems on the GMAT
April 10, 2020 Three Key Lessons from a Lifetime of Test Taking
April 6, 2020 How to Methodically Crack Tough “Primeness” Questions on the GMAT
See all
navigate_beforeEdit Filters closeClose
Clear Tags closeClose
© 2021 Cambridge Coaching, Inc. All rights reserved.