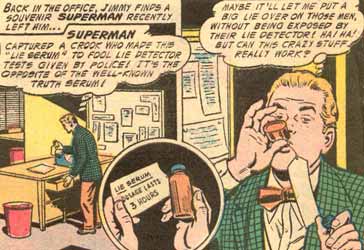 Some people who talk about the GMAT have been chugging this stuff. Don’t listen to them.

The GMAT, perhaps more than any other standardized test, creates a culture all its own around the test itself. Students hear about other students putting their lives on hold entirely to study, monk-like, for the test, barely eating or sleeping otherwise. There are more blog sites and google results trying to trick, game out, or parse, the scoring of the test than even for the LSAT. Meanwhile, unlike the MCAT or even the LSAT and GRE, the test material itself can feel like it has only a tenuous connection to business school or a business career, despite cursory references to corporations and the stock market in reading passages and word problems.

Because there’s so much enveloping chatter around the GMAT, I think that one of the most important things to do when embarking on a course of GMAT coaching is to dispel some myths, and try to separate useful fact from less-than-useful rumor.

Can You Game the GMAT’s Computer-Adaptive Scoring?

In a word: no. First, let’s talk about progressive difficulty and GMAT scoring. Yes, it’s true that GMAT question level difficulty increases and decreases in terms of your accuracy. This means that the computer maps when you get questions right and when you get questions wrong. As you get questions correct, it progressively increases the difficulty level, and when you get them wrong it decreases the level, until it plateaus at a certain difficulty level which will match your resultant score on that particular test. What isn’t true, however, is that you should try to game this system or let your approach or course of study be guided by it. Many students take this tactic or recommend it to one another, and it can almost across the board only serves to bring down your score. Trying to game any system while engaged with that system is generally a recipe for disastrous results. Once you know how the difficulty increase and decrease works, it can be difficult to ignore, but learning to ignore it is absolutely crucial. Developing strong and repeatable approaches to each question type and working with a tutor to gain mastery over the material is the best way to combat the desire to game out the test’s scoring. Once you have a real and substantive approach to the material, guesswork falls away.

Are My Individual GMAT Scores More Important Than My Combined?

There’s also a lot of back and forth about your combined score versus your separate Quant and Verbal scores, and whether the separate results or combined result are more important. Schools do look at both, but the combined result is ultimately the most important thing. As always, there are outliers and exceptions here: If one of your scores is extremely high, it can certainly ameliorate a lower score even if that lower score makes the combined result less than impressive. However, the combined result is the first thing an admissions committee sees and ultimately what they will use as shorthand when sorting your application amongst many others. This means that the best approach is almost always to devote greater time to the section on which you’re weaker, and to take practice tests at regular intervals to see how both scores are progressing and how to calibrate your approach to that progression.

Is Sheer Volume of Practice Problems Really the Best Approach?

Another widely circulating myth about the GMAT is that the best approach is to sort of strong-arm it. This approach centers on the idea that the more practice problems you do, the more your score will improve. I’ve seen students do upwards of a hundred problems a day, for weeks at a time, buying every book and online practice test on the market. Needless to say, they’re extremely unhappy if their scores do not go up. And here’s the thing: They don’t, always. Some students have great results with this approach, but some don’t. The takeaway here should: More practice problems are not, on their own, a guarantee of greater score increase. Without a focused approach and (ideally) guidance from a dedicated private GMAT tutor, students can actually do themselves a disservice with this method, by simply repeating the same mistakes at greater and greater volume, thereby cementing those flawed approaches and guaranteeing the same mistakes will occur on the test. Intelligent, focused practice at a slightly lower volume is actually more effective than haphazard practice at the highest possible volume.

There’s a method to the GMAT, and there’s a best approach to study for each individual student. Working to craft that approach, and focusing on taking that learning and applying it to the test, can cut through all the chatter around this process. Separating the GMAT itself from the culture of GMAT-myth is one important beginning step in the preparation process.

For more GMAT-relevant blog posts, check out these pieces written by our private GMAT tutors in Boston and Manhattan: The First Step is to Just Sign Up, Don’t Sleep on the Verbal Section, and When Should I Backsolve? If you’d like to know more, consider giving Cambridge Coaching a call. We offer private GMAT tutoring in Boston, New York, and online, as well as MBA application consulting. We craft a customized syllabus for each student so that instead of unfocused, brunt-force practice, you’re working in the most efficient, effective way.