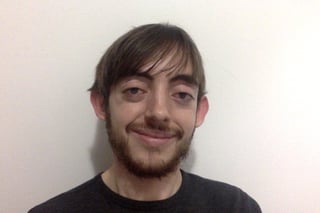 This week, we're spotlighting Dan, one of our incredible mathematics tutor in New York.

Dan’s first science experiment involved a blow dryer, a basin of water, and a heat lamp. He was eight years old and thought he could build a miniature storm cloud after learning in school about how the water cycle worked. Though the experiment was not exactly a success, Dan has been trying to understand how things work ever since. He attended the University of Chicago where he received a B.S. in mathematics and B.A. in physics, both with honors. During his time at Chicago, he wrote two expository articles on Noether’s Theorem and the Hawking-Penrose Singularity Theorems, respectively through the UChicago Math REU. He also conducted research in 2D particle dynamics attending the Chicago Area Undergraduate Research Symposium in Spring, 2015 where he presented his research. Currently, Dan is a graduate student at New York University where he is pursuing Ph.D. in theoretical physics. Specifically, he studies modifications of Einstein’s theory of general relativity and sits behind a desk puzzling over the mysteries of the universe.

Dan has been teaching and tutoring math and physics for the past 4 years and doesn’t plan to stop anytime soon. While he has been a teaching assistant in courses such as calculus, real analysis, electromagnetism, and relativity, he has experience tutoring students of all ages and levels from elementary school through college in subjects ranging from adding and subtracting fractions to solving Schrodinger’s equation. He was awarded the UChicago College Core Tutor Award for the 2014-2015 academic year for his services as a general physics tutor.

Outside of academic pursuits, Dan enjoys a good pick-up basketball game and hikes when he can get out of the city.

Let's get started with the basics, Dan.  Where are you from?

I grew up in Newton, Massachusetts, a suburb just west of Boston. I had many interests in middle school and high school: I played basketball and tennis, I played the drums for a little while, and I went on hikes all the time in the greater Boston area. I also loved to read and my favorite genre of all was science fiction.

Ever since I was in 8th grade, I wanted to study physics. As I said previously, in middle school I was very much into science fiction and from there, I branched off into reading quite a few popular science books. My imagination, curiosity, and sense of wonder which were sparked by the science fiction I read only grew as I read popular accounts of the developments of quantum physics and relativity. The world was even stranger and more interesting than anyone could have imagined! When I got to college, the desire to study physics had only grown but I also decided to study mathematics as well. To me physics is awesome because of it's predictive and explanatory power using the language of math and math only interests me in as much as it can be applied to physics (for the most part) so studying the two subjects together in college made sense for me.

I am currently a doctoral student at NYU pursuing a PhD in theoretical physics. My focus of study is on problems in quantum field theory (the theory underpinning our best understanding of sub-atomic particles and forces) and general relativity (Einstein's theory of gravity as curved spacetime). While I knew well before college that I wanted to pursue a career in physics, I did not know what particular area I wanted to study until I had taken several classes and gotten a sense for the subject as a whole. I decided to pursue a career as a theoretical physicist in the areas of quantum field theory and general relativity because these are our two most fundamental theories of physics and both of them have vast explanatory power following from a few core principles. Such diverse phenomena as the existence of anti-particles, the "solidness" of solids, and the maximum size limit for neutron stars all follow from the core principles of relativity and quantum mechanics and this is absolutely fascinating to me. Despite this, these two theories are incompatible as they currently stand and that is perhaps the greatest mystery of all in physics!

I hope to be a full professor at a university in 5-10 years dividing my time between research and teaching. Some physicists like to pursue their research unburdened by teaching but I personally couldn't imagine a career without teaching involved- I just enjoy it too much!

The main lesson I have learned from teaching is that you don't truly understand something until you can teach it. In my experience, there are three stages to learning in physics and math. The first is passive learning where a teacher speaks or you read a textbook and passively absorb the knowledge. The second is active learning where you are working on a problem set and must go back to what you passively learned and really wrestle with the material to understand what it means, what are the implications, and how can you apply it to help you solve problems. The third, which I did not fully appreciate until becoming a tutor, is learning through teaching. Early on when I tutored as a college student, I would be trying to explain some concept and realize through the effort of explaining that I did not really understand the concept satisfactorily or a student would ask me a question that revealed some hidden assumption or subtlety to the concept that I hadn't appreciated before. Through the process of teaching, I have gained a much deeper understanding of many high school and college math and physics topics and consequently, that has made me a better teacher.

What's something you've changed your mind about?

I used to think that certain people were inherently good at math while others would struggle with nothing that could really be done to get them to the next level. I no longer think that at all. I truly believe that anyone if taught towards their learning style strengths can have the moment where a concept becomes crystal clear and they go, "Aha, now I get it!"

It is very important to me that my desk is clean and organized. When my workspace is uncluttered, I can think freely. Listening to music is also very helpful to me when I have a long, monotonous calculation to do. I like listening to epic movie soundtracks especially. It makes what I'm doing seem very important and urgent!

My perfect weekend morning involves sleeping in very late, awaking refreshed and rejuvenated, and finally having a full breakfast with coffee, eggs, and toast with my wife. Give me those things and I am quite content.

If I didn't end up being a physicist, I suppose there are a few different paths I could have followed. I wanted to be a professional basketball player when I was younger but quickly gave up on that dream (probably when I realized I would not even reach 6 ft). In middle school, I was very interested in NASA and all of their space missions and certainly, becoming an astronaut was a dream of mine back then. Finally, in college, I did briefly consider becoming a high school physics and/or calculus teacher because I just love teaching so much!

What advice would you give to someone looking to get where you are now?

I would give a few pieces of advice for all the aspiring physicists, mathematicians, or scientists out there. If you think physics is cool but the concepts and problem-solving aren't easy for you, you are not alone and you do not need to be a genius to continue in this field. Work hard, consult different sources if one textbook or teacher doesn't explain things well and work through problems with fellow classmates. Ask yourself and others both simple questions and tough questions to test your understanding. The most important thing though is to do problems. The only way to truly learn math and physics is to do it so don't try to take short-cuts and get solutions from others- you are not helping yourself in the long-term. If physics and math come easy to you right now and you want to pursue a career in the mathematical/physical sciences, don't think the material will always come so easy to you. Learn to work hard and build good habits of studying and doing problems now so that when the material gets very hard, you can adjust well.

Are you interested in working with Dan, either in Boston or online?