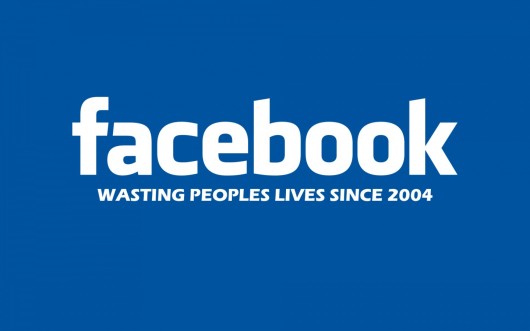 When I tell people that I quit Facebook, I tell them that it’s because it stole time from me.  Technically, this is true – sometimes at the end of the day I would tally the minutes (the hours) that I’d spent looking at photographs of people I didn’t know instead of working on my dissertation or editing grant proposals, or doing just doing anything that was actually good or pleasurable.  But honestly this was only half the truth – eventually I was only able to quit Facebook because I truly hated it.  And for a boost in productivity along with a host of other reasons: I think that you should hate it too.

It's a waste of time, but that's not the only reason.

So yes, obviously you should quit trolling social media for the sake of your own productivity, but this benefit alone was not enough for me.  Knowing this, checking my accounts was still a strong impulse, and one that we tell ourselves is harmless, an aspect of our constant multi-tasking.  On some level, I think we’re all willing to admit that multi-tasking doesn’t really work – especially as a student, where you have to be totally focused on assignments and papers to make them coherent and pointed, you have to be able to stick to a single task long enough to see it to completion.  I went through all the apps and extensions meant to limit your time on particular sites, but for me this was just a bandage and only fetishized the bad behavior.  The more you attempt to control and manage an urge, the more uncontrollable it tends to become – basic Freud.  The answer here, I think, is to try to rewire your brain, to focus on a more visceral hatred that will help to convince you that Facebook or whatever social media you’re hooked on is a bad thing, not a good one, and one which your life is categorically better without.  It helped me to focus on some of the site’s most awful aspects, and here are a few.

Here’s something on which you can focus your ire – the amount of money that Facebook makes from your wasted time and naive exhibitionism.  I’m not only talking about purchasing fertilizer for digital farms and specialty ammunition for your imaginary Mossad agent.  Feeding Facebook your interests – your favorite music, the people with whom you take pictures, the patterns of your contact and communication – it all helps the company to more effectively monetize your online personae with no immediate gains for you.  Social media encourages behavior that we have been socialized to think of as pleasurable, but ultimately promises no true benefit.   It’s true – there is no way to truly escape all online data collection, targeted advertising, and embedded marketing – it’s a system in which we’ve all become imbricated to one degree or another.  But rather than sleepily declaring defeat at every encounter with this sort of online predation, try saying “no” sometimes when you can.

When Facebook becomes a compulsion it starts to take up a disproportionate amount of psychological space and begins to warp whatever’s left.  It weaves its way into patterns of thought surround your every action  (How would this look on Facebook?  How could I put this on Facebook?  How many people will ‘like this on Facebook?) and encourages a second self you find yourself worrying over and curating painstakingly.  And when you look out at the world through Facebook, it has the potentiality to become something of a dark mirror, a lens through which you can only see in others that which you absolutely covet or despise.  You watch your classmates marry the beautiful offspring of minor oligarchs and you hate them.  Or you watch your childhood “friends” smile weakly and pose and gain weight in grim suburbs and you love it.  But maybe this was just me…

Reason 3: Facebook warps your sense of your own social world

The most repeated defense of social media is that it lets you keep in touch with many more people than you might normally without it.  But ask yourself – are you really keeping in touch?  First of all, keep in mind that you’re interacting with a highly selective self-representation, one often created in hopes of eliciting pity or praise, and not the actual person.   And secondly, ask yourself if you are actually communicating with these people (and by this I mean exchanging words) or simply passing over their photos.  You might find that rather than increasing your true social network, these sites are actually nurturing an anti-social sensibility.

Ultimately, Facebook nurtured that which was worst in me – the pitiless voyeur with not sense of the value of his own time.  The reason I started my Facebook fast four years ago was because I didn’t feel in control of my own time, and my productivity was suffering for it.  But I was only able to stay off by convincing myself by convincing myself that I was a better person without it.  So even if the total abstinence route isn’t for you, try taking a week or a month off at a time and see what happens to your productivity.

For more relevant reading, check out these other blog posts, written by our tutors: Is Exam Stress Necessarily Bad?, The Best Time Management Tips for Test Prep, Getting Organized: Time Management. Looking to work with Andrew Jungclaus? Feel free to get in touch! Cambridge Coaching offers private in-person tutoring in New York City and Boston, and online tutoring around the world.