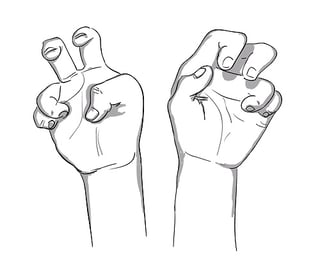 "I could care less where we go to dinner."

"It was really unique."

"Between you and I, that movie wasn't very good."

To many, there is nothing unusual about the statements above. Indeed, most of us use some variation of them frequently. But to a grammarian or someone with a depth of knowledge about the rules of English, these utterances can be cringe inducing. They sound good, but they are grammatically or semantically incorrect.

I am an English-y person, for lack of a better term. I have always loved words and the way we use them. From courses on linguistics and the history of the English language as well as the experience of editing for my college newspaper and teaching high school English, I have had ample opportunities to hone my grammar skills (there's another oft-misused word, hone, which I will address presently). My family's favorite games are Boggle and Scrabble, and we recently got into an impassioned conversation over dinner about why "could care less" doesn't make sense. (This is not all that my family does, I swear, but passion and awareness about language is something we share, and it was the inspiration for this post.)

Why doesn't it make sense? Why do certain phrases sound wrong when they are actually correct, and vice versa? In this blog post, I will expose a few common mistakes that tend to go unnoticed as errors in English and explain how to make them right.

I just (re)watched an episode of Gilmore Girls, in which Rory and Dean are fighting about Rory's commitment to extra-curricular activities in order to get into Harvard. Upset that Rory appears to care more about the Ivy League than about her boyfriend, Dean shouts, "Hey, I'm not going to Harvard, I could care less about Harvard. I just wanted to hang with you!"

The phrase "I could care less" has become commonplace in the media and in daily conversations to the extent that no one thinks twice about saying it. People say it all the time to mean they do not care. It is an ever-so-slightly shorter version of the phrase, "I couldn't care less." The difference is one syllable (eliminating that n't contraction) but the result, if taken literally, means exactly the opposite of what people who use it intend. To say, "I couldn't care less" implies that whatever is at stake is so inconsequential that I do not care at all about it. There is nothing that I care less about. When my friend asks, "Where should we go for dinner?" and I respond, "I couldn't care less," my answer indicates that I do not care where we go for dinner. Let the friend choose because it does not matter to me at all. Everything else matters more.

2. Uniquely one of a kind

People like the word unique. It's a good descriptor of an experience or a person when that experience or person stands out but in a way that is difficult to explain. For how much people use this word, though, there seems to be an unawareness of how much meaning it holds by itself. Unique means one of a kind, the only one of its kind. It comes from French, which comes from Latin, from the words "unicus" and "unus" meaning one. As such, it belongs to a set of words called absolute modifiers. These words, like perfect and equal, cannot be modified because they already contain the most of the quality they convey. A thing cannot be more of the only one of its kind – it is one of a kind or it is not. Any modifier, such as very, really, quite, and so does not make sense before one of these absolute terms.

There is an exception to this rule, however, that comes from the fact that our language is constantly evolving to incorporate new words and new definitions of existing words. A secondary but now accepted meaning in some dictionaries defines unique as unusual or out of the ordinary. In this sense, someone or something could be very unusual and therefore very unique. While this exception does expand the contexts in which unique is used, it is still more commonly understood as having its original meaning of one of a kind, and therefore people should be careful before modifying it to ensure that they are using the correct sense of the word as they intend.

3. Homing in on the meaning of hone.

Home and hone are very similar. Just one letter off. I have heard my most respected English professors and teaching colleagues use one to mean the other, without knowing that it is wrong. Home in means to zero in, to focus, to get to the point. Hone means to perfect a skill, like honing one's writing or honing an ability to throw a baseball. It is a mistake to say hone in, but a common one that has grown acceptable especially in the United States and Canada, according to Grammarist.com. The two words are not interchangeable, but whether due to misunderstanding or careless pronunciation, many people say one when they mean the other.

4. People like you and I know that it's you and me.

As someone with an active awareness of words and how they are used and misused, I find this example the most troubling partly because it is so common and yet so easy to avoid. English has two first-person pronouns, I as the subject and me as the object. Most people do alright when there is only one subject involved in a sentence (few would mistake I ran to the park with Me ran to the park.) The subject does the verb that follows it, and the subject is always I. Similarly, when there is only one object, the distinction seems clear: this present is for me, not this present is for I. On the receiving end of an object or an action, the object pronoun me is used.

What trips people up are sentences that have two subjects or two objects, not just one.

But there is a test for determining when to use me or I in these instances: when there is more than one subject or object (and when one of them is first-person), imagine the sentence without the other person's pronoun and see if it still makes sense. For example:

It is a common mix-up, whether because people don't know the difference or think one pronoun sounds better than the other. Even in movies, on tv, and in hit songs, we see examples of its misuse. The chorus to One Direction's "History" provides a perfect example: "You and me got a whole lot of history." It should be you and I because they are both the subjects who "got a whole lot of history." (For the record, I happen to love One Direction and am not embarrassed to admit it, and it is also quite possible that all the band-members knew of this rule and intentionally put me because it rhymes better. Their inclusion here is not meant as a slam against their music or their lyrics, but simply as an indication of the universality of I v. me in our culture).

5. My brother's and my favorite topic

Possession in English can involve a range of different pronouns, apostrophes, the letter "s" sometimes but not always. There are two situations that often result in confusion here: when two people share possession of the same thing, and when two people have their own version of the same thing. It can be a little complicated, so I have a few examples.

When the first person gets involved, this rule becomes slightly more complicated.

"You should meet Jeremy and I's mom." Jeremy is my brother. We therefore share the same one mom. But does I's mom sound right? I hope not. I never takes an apostrophe, ever. It is only a subject. My is the possessive pronoun for the first person singular. And it also does not need an apostrophe because it is already possessive.

The correct sentence reads: "Come meet Jeremy's and my mom."

speak "correctly" as long as one's meaning is understood. Just last fall, a New York Times letter to the editor expressed why grammar does matter, in response to a longer article that exposed how a misused word in a Texas textbook could substantively change the way students were interpreting the historical event being described. Of course, grammar isn't everything, and with the ever-increasing number of English language learners in American schools, perhaps the standard rules of what is considered "correct" English should not be at the center of English education. The English language does change, too; every year, the Oxford English Dictionary adds numerous new words to its extensive record of officially accepted definitions. Urban Dictionary accounts for words, phrases, abbreviations, and acronyms that get invented and catch on in pop culture and everyday life, particularly among a younger population.

Still, whether or not it is fair, many settings, from interviews to admissions essays, honor one's ability to communicate accurately in English as an indication of competence and intelligence. Intentionally altering a word or phrase from its standard or correct form in order to achieve a desired effect, such as in song lyrics, is different from unknowingly misusing language and conveying a message that is not what one thinks or intends it to be. And, I think, there is something to be said for being aware of this difference.

For those interested in learning more about some of these oft-debated and mistaken grammatical concepts, there are several ways to do so.

The New York Times published a weekly series for awhile called After Deadline, in which one writer exposed grammatical mistakes that had been made in previously published NYTimes articles. Although this blog is no longer current, its writer, Philip Corbett, continues to write about grammar and style in occasional stories for The Times Insider. And, as it happens, this week's A Word A Day features words that have actually changed meaning over time.

Are you interested in working with Alison for English or expository writing support?

Read more from our incredible host of blogs on English and expository writing below:

The Best Ways to Prepare for an Essay Exam

Four types of questions and when to ask them