A painless introduction to VSEPR theory

Today we will discuss VSEPR (pronounced “vesper”), which stands for valence-shell electron-pair repulsion. The basis of VSEPR is that the electrons in bonds and lone pairs repel each other. To minimize the instability that results from these repulsions, a molecule will adopt the shape that places electron groups as far apart as possible. VSEPR theory helps us predict the shapes of simple molecules such as CO2 or NH3, but it’s much less helpful for bigger molecules such as glucose or DNA, whose shapes are governed by many additional factors.

What simple molecules are we talking about? Any polyatomic molecule in which a central atom is surrounded by up to six electron groups (either bonded atoms or lone pairs) will work. Examples include:

According to VSEPR, there are five fundamental geometries that a molecule can adopt:

Because lone pairs are invisible, however, we must further specify the geometry that a molecule adopts. For example, NH3 has three bonds and one lone pair, for a total of four electron groups. Though the suggested geometry for four electron groups is tetrahedral, we must note that the lone pair is invisible. Therefore, the molecule actually resembles a triangular pyramid. The official name for this geometry is “trigonal pyramidal.”

The following table shows the molecular geometries that arise from all combinations of bonds and lone pairs. 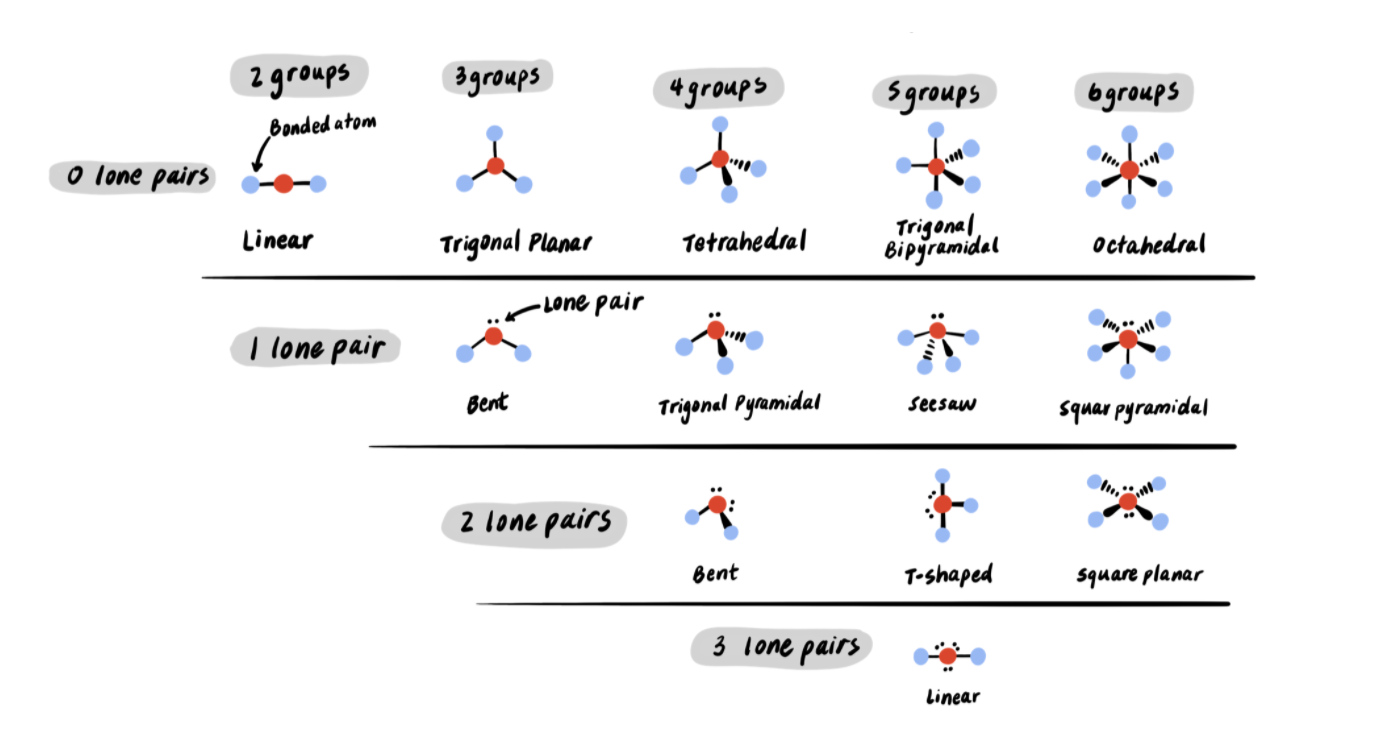 H2O has a central oxygen bonded to two hydrogens. It also has two lone pairs. Looking at the table, its molecular geometry is bent.

BrF5 has a central bromine bonded to five fluorines. It also has one lone pair. Looking at the table, its molecular geometry is seesaw.

For practice, draw the table of geometries for yourself and commit the shapes to memory. It isn’t as hard as it sounds because you can predict the geometries by thinking about how best to spread the electron groups as far apart as possible. Good luck with your studying!

September 26, 2022 The puzzle pieces of an argument
September 21, 2022 Three tips for writing a persuasive essay
September 14, 2022 Capacitor confusion: basic pointers to salvage your sanity
August 12, 2022 How to become a successful software engineer
August 10, 2022 How to prove the Pythagorean Theorem
August 5, 2022 What are the soundness and completeness theorems in logic all about?
August 3, 2022 Go from surviving to thriving during exam prep
July 29, 2022 Simple linear regression: what you need to know for data science
July 27, 2022 The value in understanding algorithms from a theoretical perspective
July 25, 2022 Demystifying operating systems
See all
navigate_beforeEdit Filters closeClose
Clear Tags closeClose