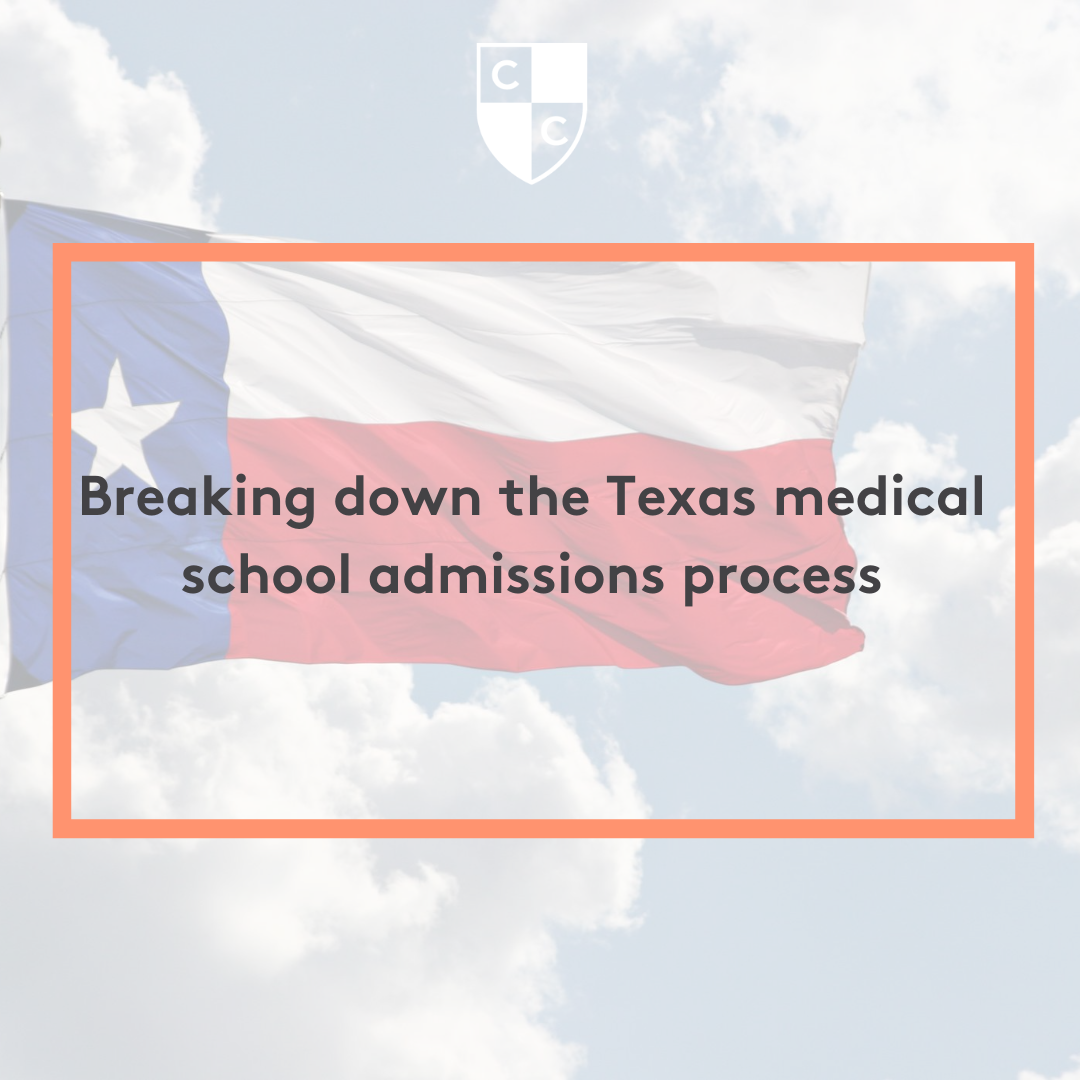 The medical school admissions process is long, confusing, and stressful. Having just finished my own cycle in which I applied to schools on both AMCAS and TMDSAS, I’m creating this post in the hopes that it could provide useful insights to current and future medical school applicants.

Below, I’m going to break down some of the information I found most important to know about the TMDSAS cycle. I want to preface this by saying that a lot of this information may not necessarily be new for some applicants - this post is meant to provide “common knowledge” and resources to break down the Texas medical school application process to those that are more unfamiliar with the nuances of how to apply.

The TMDSAS application portal is the primary application portal for applying to the public Texas medical schools, along with vet and dental schools. For the most part, it requires very similar information to what the AMCAS portal requires with just a couple of subtle differences. If you are interested and hope to apply to Texas schools you would need to apply through TMDSAS (aside from Baylor College of Medicine which is on AMCAS). However, it is important to note that the state legislature of Texas limits the number of non-residents who can go to each medical school in Texas to 10% in the hopes to train students that intend to stay in Texas in their future. This means that Texas schools will have a bias towards in-state residents. Below are the list of medical schools you can apply to through TMDSAS:

With such a high bias towards in-state applicants, why should I consider applying to Texas schools?

With the ratio of in-state to out-of-state students in every Texas school being around 9:1, you would suspect that it would be about 9x more difficult for an out-of-state student to receive admittance to a Texas school. However, this isn’t always the case as reflected by the acceptance rate differences for Texas schools. While a fewer number of students get accepted from out of state, they are also being evaluated in a smaller pool of applicants. It is undoubtedly harder for an out-of-state applicant to receive admittance to Texas schools, but some schools, like UT Southwestern, have relatively similar acceptance rates between the different pools.

One of the most attractive aspects of Texas medical schools is the quality-price ratio. For example, the tuition at UT Southwestern (currently ranked #26 on US News for best medical schools) is $22,099 for in-state residents. While the $35,199 tuition cost for non-Texas residents seems pretty high, this number dwarfs in comparison to the $51,000 tuition at Emory (ranked #24), and $65,476 tuition at Case Western (#24). Moreover, for some states, the in-state tuition is higher than what you’d pay out of state in Texas. For example, the in-state tuition for University of Virginia, University of Colorado, and University of Illinois are $43,828, $40,348, and $46,359 (not to mention that Dallas has a pretty low cost of living).

While I used UT Southwestern as my example here, quite a few of the other Texas medical schools have similar tuitions. It is also worth mentioning that Baylor College of Medicine (the only Texas medical school that does not participate in TMDSAS) has a significantly lower cost of attendance compared to other top 25 medical schools (aside from the no-tuition schools).

Differences between TMDSAS and AMCAS: The Primary Application

For one, the application opens a full month earlier than AMCAS. TMDSAS allows you to submit your application at the beginning of May. With an earlier submission, the timeline for Texas schools is ahead of the rest of the country - primaries are transmitted at the beginning of June, interviews begin in late July/early August, and some admissions decisions will be made by mid-October. I’ll speak more about timeline suggestions in the next section

On TMDSAS, you pay a flat fee for submitting your primary as opposed to paying per school that you apply to on AMCAS. Thus, no matter the number of Texas schools that you apply to, you will be paying a flat fee of only $185. For in-state applicants, I recommend submitting your application to the majority of schools, if not all, of the schools because there are no extra costs to do so.

The work/activities/extracurriculars section has no limit on the number of activities you can add, as opposed to AMCAS allowing only 15 slots. I would still advise choosing quality over quantity, but since there is no limit, you have more space to speak of all the things you’ve done. However, each activity only allows for 300 characters in discussion (research activities allows for 500 characters). I would recommend focusing on what you’ve done rather than trying to attempt a reflection in just 300 characters. In designating your 3 most meaningful experiences, you will be given an additional 500 characters to expand on why your experiences are your most meaningful. This compares to the 1325 characters given on AMCAS.

There are two additional essays (1 required, 1 optional) on TMDSAS that are not required on AMCAS. These essays both have 2500 character counts. These essay prompts are shown in the image below. Both essays are an opportunity for you to expand on who you are and how you are unique. You can talk about anything, but I would recommend that you find a way to tie it back to medicine and how you hope to impact your peers. For out of state applicants, I would encourage you to take advantage of one or both of these essays to establish a vested interest in Texas - as mentioned earlier, these schools have a strong bias to Texas residents because they want to train students that intend to stay in Texas.

The application portal generally opens at the beginning of May. Your application will take a couple weeks to be processed and verified by the AMCAS portal before it is submitted to the schools that you are applying to (currently June 1st for 2020-2021 cycle). Because medical school admissions is for the most part a rolling admissions process, it is in your best interest to submit your primary as early as you comfortably can. However, do not sacrifice the quality of your application for an early submission if your application is not ready. More information on the timeline and key deadlines is accessible here.

The Secondary Application and Interviews

Since the secondary application and interview evaluation are not very different from AMCAS schools, I will not discuss them in depth here. However, keep in mind that the timeline will be earlier for TMDSAS schools since you are sending your primary application earlier.

One difference to note for the secondary is that Dell Medical school conducts a very short video interview where you verbally answer prompts.

For interview day, it is also important to note that the number of students you’ll find during an interview day at a Texas school can easily get to around 40-60 students. With such a large number of students, it is a little less likely that your interviewer will ask many personal questions about your application, and more likely that they will ask more generic, behavioral questions.

The Match Process (Only Applies to Texas Residents)

For Texas residents, TMDSAS organizes a match process to offer seats to as many students as possible very early in the cycle. Rather than 1 student holding an acceptance at multiple schools until the April 30th deadline, TMDSAS matches students so that each student will hold 1 acceptance at the match deadline in January/February. This maximizes the number of students offered an admission to medical school very early in the cycle and therefore can reduce the stress and anxiety for students that would have originally been waiting on a waitlist.

Here’s how it works:

TMDSAS medical schools can begin offering admissions to students as early as October 15th and all the way until February (for the 2020-2021 cycle). These offers are referred to as pre-match offers. A student can receive multiple pre-match offers and hold them until the match deadline. Additionally, a student may receive no pre-match offers during this time period. One potential reason for not receiving an offer could be due to late interview dates. For example, some schools may extend most of their pre-match offers on October 15th. Thus, only interviews conducted well before this date would receive the majority of pre-match offers (another reason to apply as early as you comfortably can).

By the match preference submission deadline on Feb 19th (for 2020-2021 cycle), you must submit a ranking of your top choice preferences for which school you would like to attend. All schools you interviewed at will appear on TMDSAS for you to rank, and match decisions are released on March 5th. Following match day, students will hold an admission offer to, at most, 1 TMDSAS school. I will lay out a couple of examples that will help explain how matching works.

Example 1: Bob holds pre-match offers at school X, and Y. However, he interviewed at school A and he ranks school A as his top choice, followed by X and Y. At the very worst, Bob will retain his offer to school X. At best, Bob will receive admission to school A if they are interested in Bob. Following his match, Bob will only hold admission to one school and will automatically dispose of his admission offers to other schools (which will open up seats for other applicants).

I want to conclude this post by reminding you that your self-worth is not determined by the outcomes of this admissions process. I know that it can be hard to remember this simple fact because you are putting your whole life on display for schools to evaluate, but it really is true. It is impossible to minimize the existence of a human being to a single application and there are so many factors that play into medical admissions that make it a black box. I have a friend who was rejected from every school to which he applied one year and was forced to reapply. In his second cycle, he received admission to a top-25 medical school. Additionally, I have heard stories of people who were not accepted into a single program (including safety schools) and then received an admission off the waitlist to their top choice school with a scholarship.

All the work you put in over your 4 years of college is not for naught. Each experience and hour of work that you put in has undoubtedly helped you grow into being who you are. While the road ahead is long and daunting, don’t forget to celebrate how far you’ve already come and how much you’ve already accomplished!