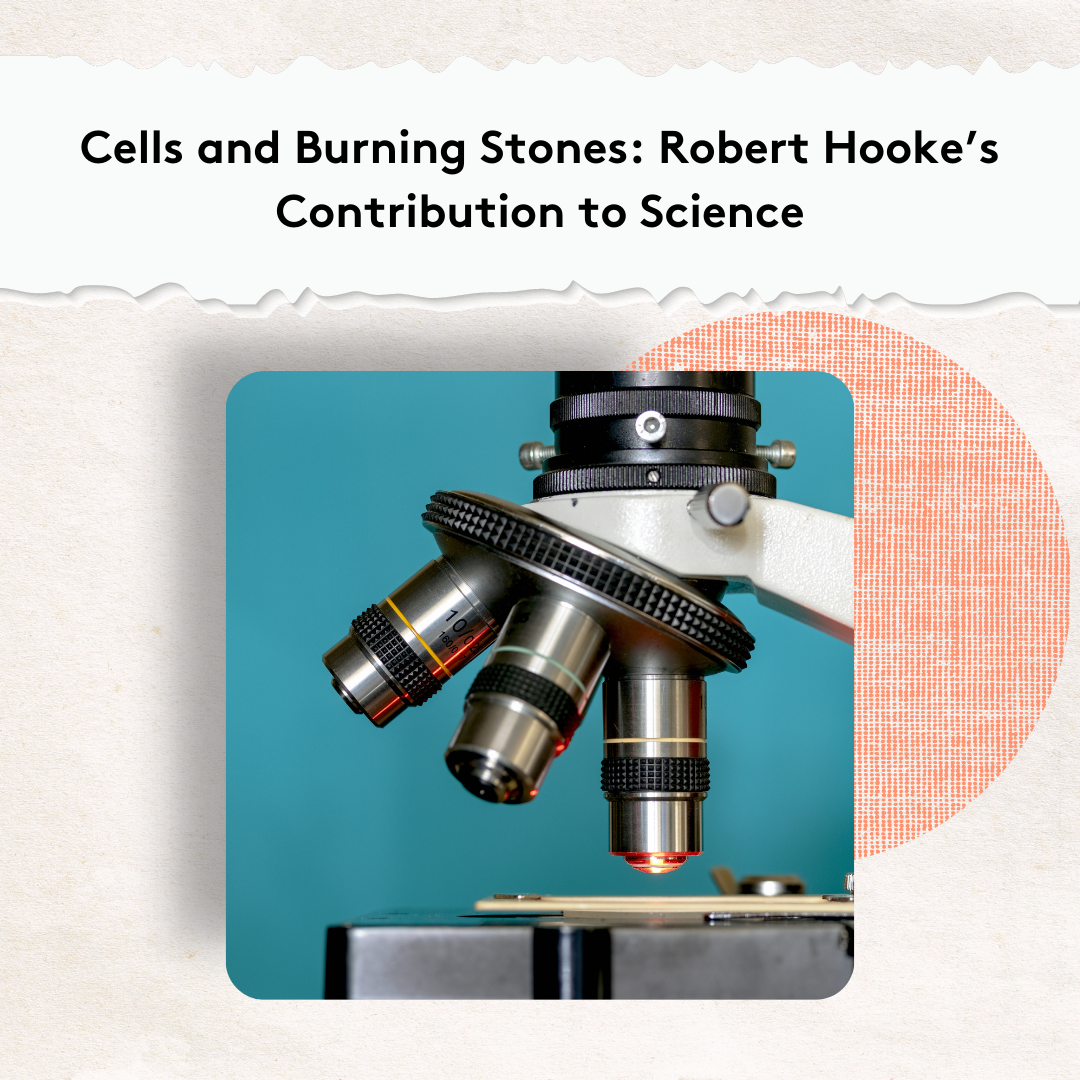 The discovery of cells, and the naming of them, is most often credited to Robert Hooke, an enigmatic genius from England in the mid 1600s.  Robert Hooke was born in July of 1635 on the Isle of Wight and was, by many accounts, brilliant when it came to science, architecture, and engineering, but a little rough around the edges socially.

Although famous for his contributions to biology, he was perhaps better known at the time as an architectural surveyor, working in London after the Great Fire of 1666. He also studied the planets Mars and Jupiter, and was an assistant to Robert Boyle (of Boyle's law) working on the relationship between gas volume and pressure.  You might be most familiar with this physical law as you breathe!

Hooke had many, many scientific accomplishments, and was appointed as Curator of The Royal Society.  He was also named Professor of Geology at Gresham College in 1664, the same position now held by Sarah Hart, the first woman to hold the position since its inception in 1597.

During his time at the Royal Society, Hooke spent considerable effort completing the work described in the book Micrographia published in 1665.  This is some of the very earliest work using microscopes to describe many varieties of life. In fact, it was the first publication to use the term “cell” to describe the structure of living organisms.

Interestingly, Hooke’s microscopy work predates photography by centuries and, like many scientists of that age, he drew his observations by hand!  Hooke was observing preparations of cork and noted that the individual building blocks of the tissue looked like honeycomb or even the cells occupied by Christian monks in a monastery (depending on the history you read).  He applied the word “cell” to these cork building blocks, and he was way ahead of his time with this description. The cell theory, which we now use as the basis for the structure of all life, was not formulated by Schleiden and Schwann until 1839, almost 175 years later!

The microscope Hooke is thought to have used for these studies was an optical microscope (the only kind available then), which refracts light through a glass lens (or lenses) to produce an image observable to the eye.

Although the principle of lens aided optics is very old, thought to have been used by the ancient Greeks (in the form of burning stones), the first simple microscopes, which we know as magnifying glasses, did not appear definitively until the 12-13th century in “reading stones” or eyeglasses!

The most commonly used microscope in biology classes today is a compound light microscope, not unlike Hooke’s instrument. This microscope uses an objective lens positioned close to the specimen and an eyepiece for viewing, and was first seen in Europe in the early to mid 1600’s.  The famous scientist Galileo also developed a microscope, which was the instrument used to coin the actual name “microscope”. In this type of instrument, an object is illuminated and the image is transmitted through an objective lens providing the initial image.  Within the microscope, that image is then projected and magnified by the eyepiece onto the viewer’s retina.  Depending on the lenses used, the maximum magnification of light microscopes can be ~1000X.  Much like Hooke experienced, this level of magnification would enable you to comfortably view a single 35uM diameter human cell.

The contemporaneous development of the microscope and Hooke’s insatiable curiosity and intellect combined to launch an entirely new aspect of biology: cell biology.  While it took almost 175 more years to coalesce into Cell Theory, cell biology has opened uncountable avenues for discovery, innovation, and medicine that continue to this day!

Our biology tutors are doctoral candidates and PhDs. Our team also includes MD candidates, MDs, and MD-PhDs. We can work with students of all ages to deepen their study of biology. In all tutorials, we take a highly structured and personalized approach to ensure that our students receive the most effective and comprehensive tutoring available.

Most of our tutors have served as teaching assistants for hundreds of undergraduates, many of whom are encountering biology for the first time. We have extensive experience working with high school students studying for introductory courses and AP exams, as well as pre-med and medical students tackling upper level biology courses.

Hormones of the female reproductive system

April 1, 2022 Linkage and association mapping in genetic analysis
March 21, 2022 How to tell the difference between mitosis and meiosis
January 3, 2022 A brief primer on the secretory pathway
November 12, 2021 Tips for studying biology
May 26, 2021 Fetal circulation: three shunts, one rule
May 19, 2021 The Immune System
March 1, 2021 Hormones of the female reproductive system
February 26, 2021 Gametogenesis and spermatogenesis and oogenesis, oh my!
October 6, 2020 Start by learning how you learn…and then tackle the sciences
See all
navigate_beforeEdit Filters closeClose
Clear Tags closeClose